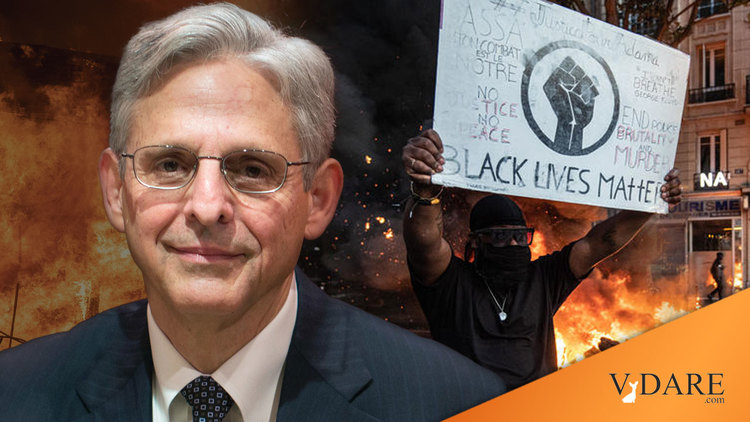 Steve Sailer: Merrick Garland Is in the Dark About Antifa

From my new column in Taki’s Magazine, here’s my book review of Any Ngo’s bestseller Unmasked exposing Antifa:

Merrick Garland Is in the Dark about Antifa
Steve Sailer

When asked if he regards the endless attempts by Antifa rioters to burn down the federal courthouses in Portland and Seattle as acts of domestic extremism and terrorism, Merrick Garland, Joe Biden’s nominee to be Attorney General, replied:

So an attack on a courthouse while in operation, trying to prevent judges from actually deciding cases, that plainly is, uhm, domestic extremism, uhm, domestic terrorism. An attack simply on a government property at night…or any other kind of circumstances, is a clear crime and a serious one and should be punished. I don’t mean…I don’t know enough about the facts of the example you’re talking about, but that’s where I draw the line. One is…both are criminal, but one is a core attack on our democratic institutions.

After all, how can anyone expect an Attorney General-designate to know enough facts about attacks on the federal judicial system that kept happening night after night?

It was after his bedtime.

Seriously, if you watched only the carefully curated national news, you’d have gotten the impression that (a) Antifa doesn’t exist; (b) Antifa is a civic betterment movement led by the public-spirited Wall of Moms; and (c) The peaceful protesters of Antifa were the Gandhi-like victims of Trumpian brutality.

On the other hand, some of us who are Pacific time zone night owls watched hundreds of Andy Ngo videos of what was happening in Seattle and Portland during the wee hours long after the national media had called a lid on their coverage of the Peaceful Protests. In Ngo’s simple video footage, the Antifada sure looked extremist and terrorizing.