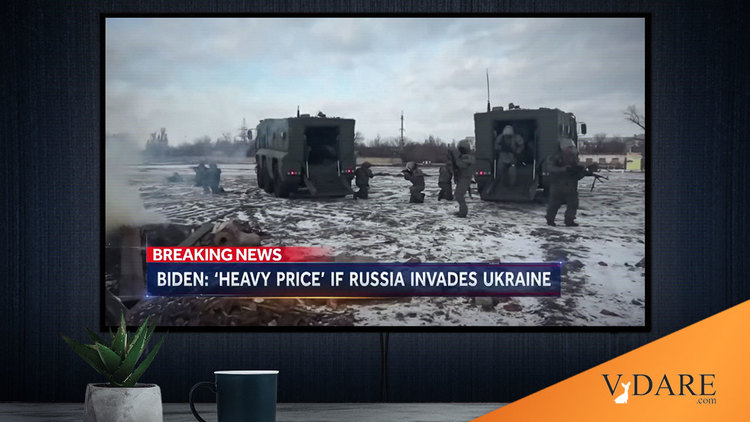 While Ukraine’s president complained about “acute and burning” warnings from Washington, the Pentagon issued a dire new appraisal asserting Russia has amassed enough troops to invade his entire country.

KYIV, Ukraine — Ukrainian officials sharply criticized the Biden administration Friday for its ominous warnings of an imminent Russian attack, saying they had needlessly spread alarm, even as a new Pentagon assessment said Russia was now positioned to go beyond a limited incursion and invade all of Ukraine.

The diverging viewpoints brought into the open the stark disagreement between Ukraine and its key partner over how to assess the threat posed by Russia, which has massed about 130,000 troops on Ukraine’s border in what American officials are calling a grave threat to global peace and stability.

The tensions, which have simmered in the background for weeks, have surfaced at a particularly delicate moment, as President Vladimir V. Putin of Russia reviews the American response to his demands for addressing Russian security concerns in Eastern Europe.

“They keep supporting this theme, this topic,’’ President Volodymyr Zelensky of Ukraine said of the repeated warnings by American officials. “And they make it as acute and burning as possible. In my opinion, this is a mistake.” …

Prospects for a negotiated end to the crises remained uncertain at best on Friday. Following a video conference between Mr. Putin and President Emmanuel Macron of France, the Kremlin said in a statement that “the principal concerns of Russia went unaddressed’’ in the American response, even as Mr. Macron advocated a conciliatory approach to achieve a diplomatic solution.

Moscow has threatened a “military-technical response” should its concerns not be met.

… As they have done throughout the crisis, Russian officials sent mixed messages about the state of negotiations with the West. Russia’s foreign minister, Sergey V. Lavrov, said in a radio interview that Washington’s written response this week contained “a kernel of rationality” on some matters.

Those include missile deployments and military exercises in Eastern Europe, though Mr. Lavrov also said that neither the United States or NATO was seriously addressing the most pressing Kremlin concerns. Russia has demanded that the West scale back its military presence in Eastern Europe to early post-Cold War levels and guarantee that Ukraine never join NATO. …

As the West awaited Mr. Putin’s next step, Ukrainian officials expressed increasing annoyance with the Biden administration as they stepped up their calls for calm.

Speaking just a day after a phone call with President Biden, Mr. Zelensky said that while he too saw grave risk in the Russian buildup, the American policy of publicizing intelligence and risk assessments around the Russian threat was unnerving Ukrainians and harming the economy at a time when he said he would like to see “quiet military preparation and quiet diplomacy.”

His complaints were echoed by his top security official, Oleksii Danilov, who said in an interview that “panic is the sister of failure.”

It is not clear what the long-term ramifications of the rift might be. It is unlikely that Mr. Zelenksy’s statements would have any effect on arms shipments or diplomacy as the West tries to deter Mr. Putin from military action. But further divergence between the two countries could induce Ukraine to pursue a separate path to a settlement, one that it has been exploring in the European-led talks underway now. It could also sow distrust that Mr. Putin could try to exploit.

… Ukrainians, officials say, view the Russian threat as part of their daily existence. 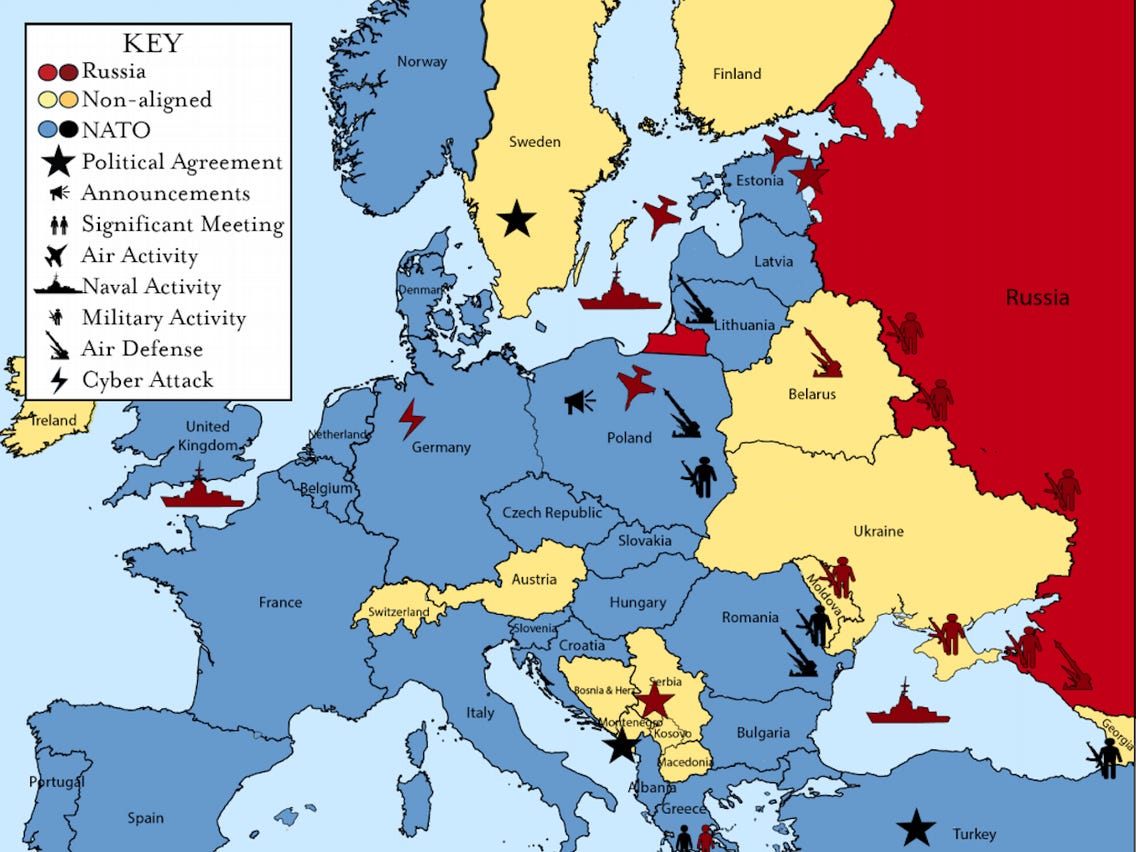 Leaving aside the Russian exclave of Kaliningrad between Lithuania and Poland, two NATO members already have a border with Russia: Latvia and Estonia. Estonia is less than 100 miles from Russia’s second city St. Petersburg.

It’s a little like if during the Cold War, Mexico had joined the Warsaw Pact, except that NATO is even closer to St. Petersburg than Tijuana is to Los Angeles. As you’ll recall, the U.S. didn’t not look complacently upon the island of Cuba aligning with the Soviet Union and still hasn’t forgiven the Cuban regime.

Great powers tend to feel that it befits their dignity to be surrounded by buffer states, the way that Mexico would never dare align itself against the U.S.

It’s not that NATO is going to send tanks through Estonia to lay siege to St. Petersburg like in 1941, but it makes nervous military men, who are trained to think about what the other guy could do and leave it to the politicians to think about what he would do. Also, borders between rivals are worrisome because both sides’ militaries often charge right up to the border as if they were about to attack, to see what the other side would do about it.

The particular problem with Ukraine is that it’s so big: 800 miles wide from west to east. The Russians envision a NATO Ukraine as a dagger pointing deep into Russia.

Moreover, some of industrial eastern Ukraine is economically integrated with Russian plants just across the border because the Soviets never anticipated that Ukraine would get out from the Soviet Union. So the Russians are concerned about Ukraine not just someday joining NATO but also joining the EU and coming within the EU’s trade barriers.

Of course, if Russia were to retake Ukraine, it would move the Russian army 800 miles closer to the Rhine, so NATO looks at adding Ukraine to NATO as the surest way to prevent that. Of course, the U.S. orally promised the Soviets in 1990 that NATO would not expand eastward, but Gorbachev failed to get it in writing.

On the other hand, NATO has various reasons, bad and good, for not agreeing to a compromise that would keep Ukraine out of NATO. For one thing, NATO thrives on growth and tension to justify its existence more than 30 years after the fall of the Soviet Union.

A better reason is the revolution in attitude toward territorial conquest that emerged during the second quarter of the 20th century. Before the Great War, it was widely assumed that making war to enlarge the kingdom was the most glorious business of kings. But WWI was so awful that by 1928 a whole bunch of countries signed the Kellogg-Briand pact declaring aggressive war outlawed.

This, of course, did not prevent WWII. But after the Israeli war of independence in 1948, the world came to look generally unfavorably on further wars of conquest. Thus the next Israeli expansion in 1967 has remained diplomatically fraught ever since, with Israel giving some of the “occupied territories” back and most of the world not accepting Israel’s claim to have annexed the Golan Heights.

In general, the world is better off without wars of conquest.

So, the Russian return to using force for territorial aggrandizement sets a poor precedent. Granted, the dissolution of the Soviet Union in 1991 disadvantaged Russia due to the Soviets drawing some of the internal borders overly generously to the smaller ethnicities (e.g., Khrushchev assigning Crimea to Ukraine SSR in 1954) because, after all, what did it matter? The science of history proved the Party would rule forever, so this was all for show.

It’s perfectly natural that Russia would want to rectify the bad treatment it got when it was weak 30 years ago. But Russia doesn’t have much of a way to do this other than to threaten it’s going to conquer part of Ukraine.