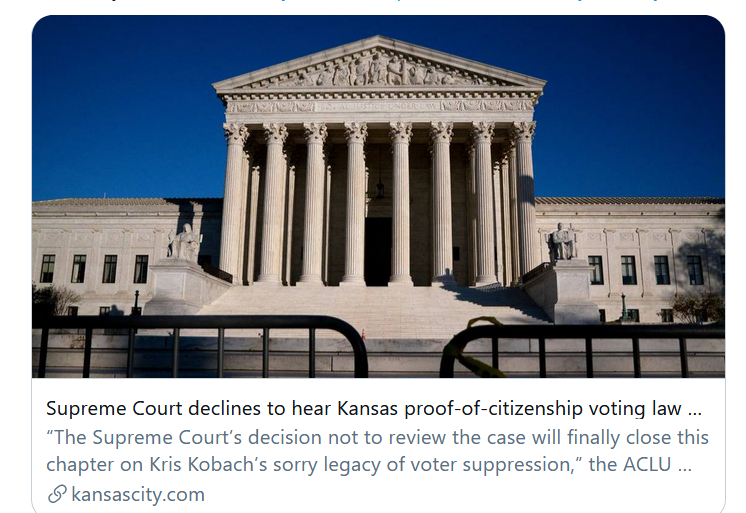 Once again, the U.S. Supreme Court refuses to  hear an important case.  This time it's about voter registration.

From the Kansas City Star:

The U.S. Supreme Court will not take up Kansas’ petition seeking to re-establish a voting restriction crafted by former Kansas Secretary of State Kris Kobach.

By denying the state’s petition, the court upheld rulings by the U.S. Court for the District of Kansas and the 10th Circuit Court of Appeals that found Kansas’ proof of citizenship law to be unconstitutional.

The law, which went into effect in 2013, required prospective voters to provide a birth certificate, passport or other documentation to prove their status as citizens before they could register to vote, a measure that the law’s supporters said would prevent non-citizens from voting. [Supreme Court declines to hear Kansas proof-of-citizenship voting law crafted by Kobach, by Bryan Lowery, Kansas City Star, December 14, 2020]

So what do you have to do to prove your citizenship in Kansas in order to register to vote?  According to the article, applicants for Voter ID must only "attest to their citizenship status with their signatures."  Oh wow.

In Mexico, meanwhile, in order to obtain a voter ID card, an applicant must present a nationality document, either birth certificate or naturalization certificate.

The U.S. voter registration system is a joke.  And the Supreme Court wouldn't even hear this case.

Our country is becoming a joke.