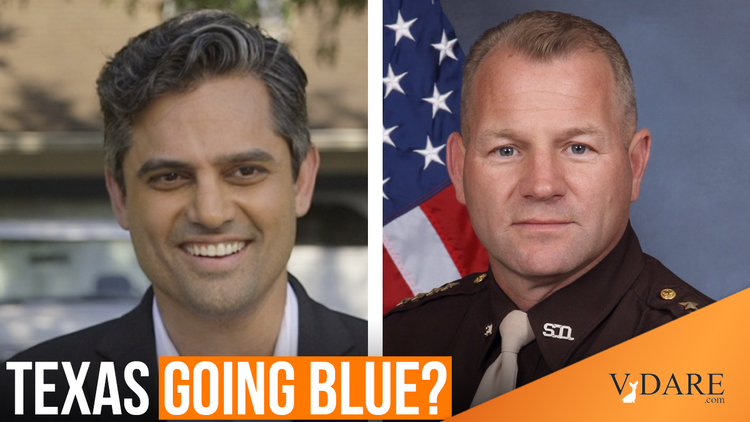 Democrats are giddy that 2020 will be the year Texas turns blue. The RealClearPolitics average gives Donald Trump only a slight lead over Joe Biden in a state the president won by roughly nine points. This blue shift is obviously caused by demographic change, and is apparent in its contested congressional races [Polls, late campaign activity suggest Republican dominance in Texas could be at risk, by Alex Samuels and Patrick Svitek, Texas Tribune, October 27, 2020].

Texas’ 22nd Congressional District, nestled in the Houston suburbs, was once a solid red seat. In 2016, incumbent Rep. Pete Olson won the district by almost 20 points. This year, his aspiring successor Trey Niehls is down in the polls to his Indian Democratic opponent, Sri Preston Kulkarni. Demographics explain the district’s change. The area has nearly doubled its Asian population in 10 years, going from 11% in 2009 to 18% in 2019 [As Democrats dream of a blue Texas, tight House race will give a glimpse of how far they’ve come, by Jacob Pramuk, CNBC, October 28, 2020]. Asians, particularly Indians, are helping push Texas blue. Kulkarni’s campaign is phone banking in 27 different languages, including six of the most common non-English dialects of India. Seventy-two percent of Kulkarni’s co-ethnics in America plan to vote for Biden this year [Indian Americans Stir Blue Wave in Deep Red Texas, by Jack Detsch and Robbie Gramer, Foreign Policy, October 28, 2020].

That’s not the only suburban district under threat. The 24th district, represented by the retiring Rep. Kenny Marchant, also may go Democratic. The area, which covers northern Dallas suburbs, was once a “a more homogenous majority white area” but “is now a diverse area with white, Latino, Black folks living together,” according to University of Texas professor Victoria DeFrancesco Soto [Will A Diverse Electorate Make The Difference In Flipping Texas' 24th Congressional District?, by Syeda Hasan, KERA, October 28, 2020]. The race pits a white woman, Beth Van Duyne, against “Black Latina” Candace Valenzuela. The most recently available polls show Valenzuela ahead. Marchant won re-election in 2016 by double digits.

Demographics are destiny. The Texas GOP may hold on to the state in 2020, but they will struggle to maintain dominance for years to come--unless they address and solve the national question.