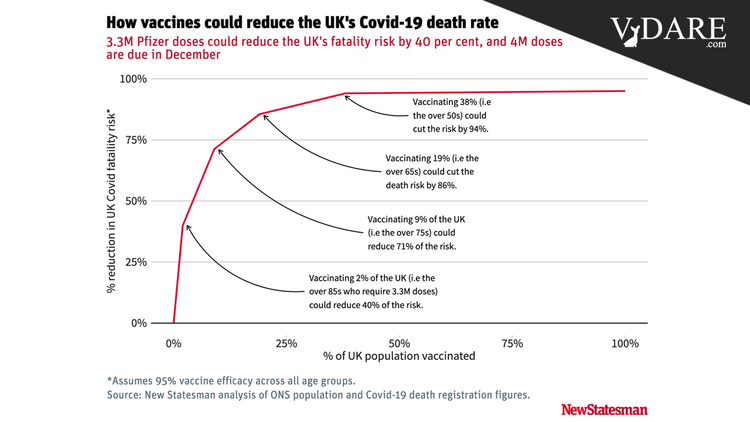 The British Plan To Minimize Covid Deaths Via Vaccination From the New Statesman:

How Covid-19 vaccines could rapidly reduce the UK’s death rate
There is a very real possibility of Britain largely eliminating the fatality risk of the virus by early spring.

… As the graph below shows, vaccinating small portions of the population will have outsized effects: vaccinating the 2 per cent of Britons most at risk could, for instance, cut the risk of Covid-19 deaths by about 40 per cent. (I’ll explain why in more detail below.)

The first wave of 800,000 Pfizer doses will soon be supplemented by more waves of supply. A total of four million doses of the Pfizer vaccine are, according to UK health chiefs yesterday, due in the country by the end of this month – enough to vaccinate two million people.

Those two million vaccinations should almost halve the UK-wide risk of death. This is evident from the Office of National Statistics’ Covid-19 fatality data. As the data reveals, 42 per cent of coronavirus deaths in the UK have been among those aged 85 and over. There are about 1.65 million people in the UK of this age, or around 2 per cent of the population. The four million Pfizer doses due across the UK in the final weeks of 2020 will be enough to vaccinate them all. Assuming a 95 per cent effectiveness rate, that would cut the fatality risk of coronavirus by 40 per cent.

There are two further key stages to keep in mind. First, vaccinating everyone aged at least 65 will further reduce the UK’s Covid-19 fatality risk, potentially resulting in an 86 per cent reduction in risk, as this age group and above has accounted for 90 per cent of deaths. This will require just under 25 million doses of the Pfizer vaccine in total.

The UK has ordered 40 million doses of the vaccine, with the “bulk” of those expected to be available and administered in January and February. By that point, Covid-19’s fatality risk may have reached a level comparable to flu.

Finally, a further 25 million doses will take the cut in risk to 94 per cent, by vaccinating everyone aged at least 50, as well as those most at risk between 16 and 49 (accounting for 99 per cent of Covid-19 deaths so far) – this is the government’s plan.

The British have a vaccine prioritization philosophy and a plan. I don’t know if it’s the right philosophy, but at least it’s an ethos.

It’s important to distinguish between the short run when vaccine supplies are constrained and the long run when they aren’t. Although I’m not convinced that the only metric of interest is deaths, that is definitely the one that gets people’s attention. When vaccines are rare, we can get more bang for the buck by inoculating the most at risk. Later, if the vaccines prove to reduce infections, we can go for herd immunity.

The CDC, in contrast, seems confused about this long vs. short run distinction, allotting tens of millions of doses to Frontline Essential Workers early in honor of St. George Floyd when they will still be a drop in the bucket toward herd immunity.

Notice that the Brits have the strategy advocated 9 months ago by the libertarian right: shelter the vulnerable, and go for herd immunity, partly through infection of the less vulnerable plus, increasingly, vaccination of the less invulnerable. But now we have a way to get there.

Which would be a good idea, because of the problem of Fisherian Acceleration: when there are a large number of cases of a virus, the more chances there are for malign mutations, such as this new British one that is more infectious.