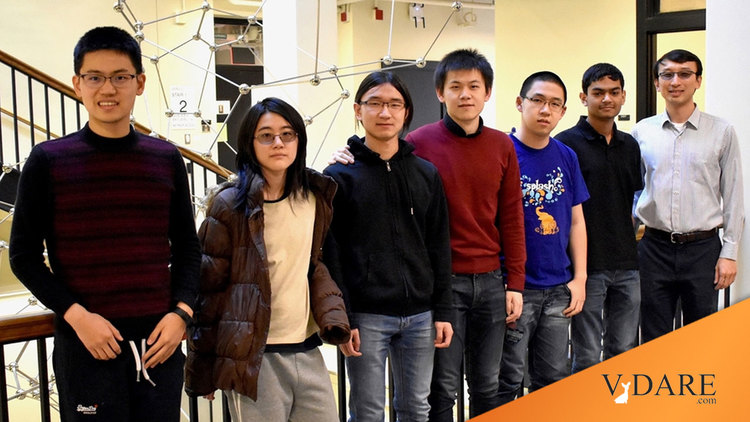 The East Asian Takeover Of The Putnam Mathematical Competition

MIT News reports that MIT Math majors win all top five spots (Putnam Fellowships) in the Mathematical Association of America’s (MAA’s) 82nd Putnam Mathematical Competition for undergraduates in the USA and Canada, held in December 2021 with winners announced in March 2022.

The Putnam Mathematical Competition for undergraduates at North American colleges has been going on since 1938. It’s all way over my head, but it appears to be a very big deal in the math prodigy world and attracts a lot of the top talent. The top 5 (or 6 in case of ties) are named Putnam Fellows. The most famous Putnam Fellow was a top fiver in the second contest in 1939: MIT student Richard Feynman.

I really have no idea what Putnam Fellows do, but I’m all for them.

The MIT News article links to the news items for earlier contests. The MIT team for the 79th and 80th Competitions was not entirely East Asian: one member (not included in the 2020 photo) was South Asian. The 81st Competition held in Spring 2021 was “unofficial”, presumably disrupted by COVID-19.

It is not possible to disparage these students’ achievements. The problems are hard, and cannot be solved by gaming the test – as we hear many Asians do for SATs and other tests. …

Many years, the median score is zero. There have been only five perfect scores in history.

The list of previous winners shows that Asian domination of the contest began in the last 20 years. Before that, the names are nearly all consistent with Caucasian or Jewish ethnicity. There is still an occasional Putnam Fellow with a Western name – the last one was in 2018.

This is an early sign of an enormous social change – that the youngsters who are destined to form the very top of the US cognitive elite are no longer either Jewish or Caucasian, but Asian – and the changeover has occurred over a period of only 20 years.

In the early years, many of the Putnam Fellows had Jewish surnames, with Brooklyn College and CCNY being well represented.

Three women have been named Putnam Fellows a total of four times, with the first being in 1996.

The first Asian-named winner was Tai Tsun Wu of the University of Minnesota in 1953. The first South Asian name was Rohit J. Parikh in 1957, who came under much criticism recently:

In 2018, a Facebook post by Parikh, called for deportation of all illegal immigrants, writing, “I do believe that everyone who is illegally here should be deported but that the US should support them in their home country.” Parikh further claims in the Facebook post that Hispanic immigrants are insufficiently educated compared to Indian immigrants like him, leading Brooklyn College students to public protests and calls for the university to discipline him. The president of Brooklyn College Michelle Anderson called his remarks “antithetical to the fundamental values of Brooklyn College.” Defending his position in an interview to a CW-affiliate WPIX, Parikh claimed he had not meant that Hispanics in general were dumber than Indians in general, but rather that his comparison of intellectual abilities of Hispanics and Indians had applied only to those who had immigrated to the United States. “There are a lot of stupid people in India but they don’t come here,” he explained.

By the 1990s, 14 of the 54 winners had Asian names. Many of the Euro-Americans fellows around the turn of the century had Eastern European first and last names.

Four of the 36 Asians had a South Asian name, while the other 32 had one-syllable Chinese or Korean-style names.

Of the 32 with East Asian surnames, ten had American first names (suggesting they were born or raised here), 21 had East Asian first names, and one offered both: Alex (Lin) Zhai.

One Putnam Fellow was a classmate of mine at Rice U.: Richard Mifflin, who does complicated stuff for Exxon. The name “Mifflin” pops up a lot in Texas history. My vague impression of Texas from attending Rice is that it attracts talent skewed toward Shape Rotators rather than Wordcels.