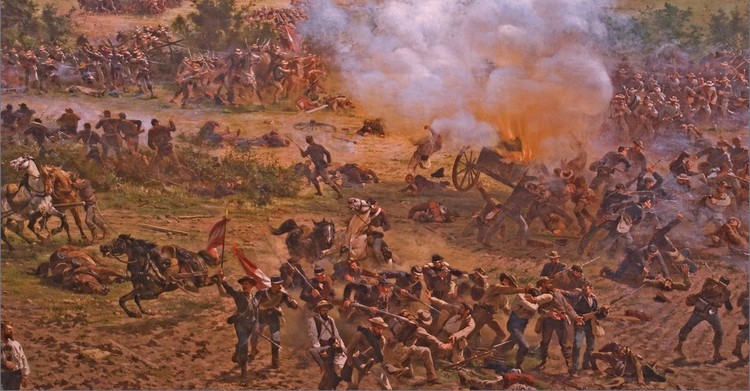 The Gettysburg Address: Not Heritage For Obama's Nation

I see the Obama Protection Phalanx in the National MSM has wheeled to cover him. There is seemingly no editorial commentary on the President’s extraordinary and highly significant decision most extensively reported in by The Washington Times  Obama diss: President snubs historic Gettysburg 150th anniversary ceremony , by Ben Wolfgang Thursday October 31, 2013. Only local media outlets have feebly protested.

Now I think the Civil War was a grotesque disaster and Lincoln an evil man as I discussed in Obama = Lincoln? Does that mean Civil War? and also here. I agree with Paul Craig Roberts that he was America’s Pol Pot, with John Derbyshire that the conventional Conservatism Inc Lincoln worship seriously misguided, and I appreciate Gary Wills’ argument that the Gettysburg Address was blatant ideological piracy

But you have to have ears of brick and a heart of stone not to appreciate that the Battle of Gettysburg, the Address and the war of which that engagement was the apogee is absolutely central to the legend of America. In a sense it is America’s Agincourt, not least in its contribution to the nation’s literary canon.

But the point is: not to Obama’s Nation.  The President is continuing the pattern I first discussed early in his first term in Why the National Prayer fiasco? Because Obama dislikes American Christians. Later that year in Why Obama insulted Norway I quoted Steve Sailer’s devastating catch in America’s Half Blood Prince: the importance of Obama’s 1988

…three-week tour of the wonders of Europe that left him psychologically devastated because "It just wasn't mine."

The Civil War can arguably be presented as an act of amazing altruism by Northern Whites to America’s Blacks – not, prior to Emancipation, their fellow-citizens. Expecting gratitude from the Obamacrats would be naïve. They are about hatred and conquest.