Those who are campaigning for amnesty for illegal aliens always prep the ground, with any amnesty proposal always based on a manufactured demand to right some injustice. By “injustice” they mean illegal aliens acting deliberately to break the law and place themselves and their children subject to deportation.

The latest scheme being run by supporters of illegal immigration is the so-called “Documented Dreamers” problem. These are the adult children of small group of aliens in the United States on Non-Immigrant Visas (NIV) that allow for work authorization. Most are familiar with the infamous H-1B and L-1 visas that mega-corporations use to drive down wages for their employees, but there are others, for example the E-1, E-2, and E-3 NIVs for investors who come to the United States to start a business that should be hiring American citizens.

As an aside, the fraud in these programs is extensive, with most E-1 and E-2 NIV holders involved in some minimally functioning business that does not actually fulfil the requirements of the NIV to have significant investment in the United States. However, neither the Department of State nor U.S. Citizenship and Immigration Services (USCIS) make any effort at fraud detection concerning issuance or renewal of those NIVs. I have written on the problems of fraud in the E NIVs here: E-2 Investors Visas Revoked—Maybe They Should Move To Honolulu, February 23, 2012. The E-3 NIV is something separate, as it is for Australians seeking employment; similarly, the H-1B1 NIV is for specialty employment of Singaporeans and Chileans similar to H-1B and L-1 NIVs. Both types of NIV are renewable indefinitely, but neither makes allowance for an alien who intends to immigrate to the United States, unlike the H-1B and L-1, which are dual intent NIVs, which means that the alien may lawfully be using the H-1B and L-1 NIVs with the intent of eventually immigrating to the United States. All other NIVs, from tourist to student visas, prohibit the alien from intending to immigrate.

This is important, as the latest amnesty scheme is for not for the E and H-1B1 NIV holders who have slaved away in a profit-making business, but their children. Those children, including adults aged 18 and under 21, also have no path to residency. Their status is also temporary. This, though, has been declared a crisis by the Lying Press and there is now a lobbying campaign to include a pathway to residency, and citizenship, for these aliens on temporary NIVs.

Most college students can’t wait for their 21st birthdays. But Lakshmi Parvathinathan is terrified.

It’s the moment when everything she’s worked for could slip away.

“All my friends excitedly talk about turning 21 — hitting the bars, all of that…but it’s just something that I dread,” she says.

The day she turns 21, Parvathinathan will no longer be protected by the work visa that allowed her parents to immigrate to the United States from India. And she may face deportation.

It’s known as “aging out,” and experts estimate that about 200,000 people like Parvathinathan are living in a similar limbo. Brought legally to the United States as children, many are scrambling to find ways to stay in the country they love. Some are forced to leave the US when they run out of options.

They’ve dubbed themselves “documented Dreamers,” and they say their plight shows how broken the US immigration system is.

Even those who immigrate legally find themselves facing roadblocks that are impossible to surmount, Dip Patel says. The 25-year-old pharmacist is the founder of Improve the Dream, a group of “documented Dreamers” pressing Congress and the Biden administration to help save their futures.

[Why Hundreds Of Thousands Of Kids In The US Dread Their 21st Birthdays, by Catherine E. Shoichet, CNN, November 27, 2021]

There is no problem. These adults—all in this article are over the age of 18—are in a situation created by their parents. Like an illegal alien who brought a minor child to the United States knowing there is no legal future for them, these parents brought their children to the United States, lived here for decades, knowing full well that they and their children had no path to lawful permanent residency. Now it is being demanded that Americans accommodate aliens demanding special privileges, just as illegal aliens do. And like the Mexican flag-waving illegal aliens from the Bush Amnesty attempt, these aliens are still waving their country’s flags. 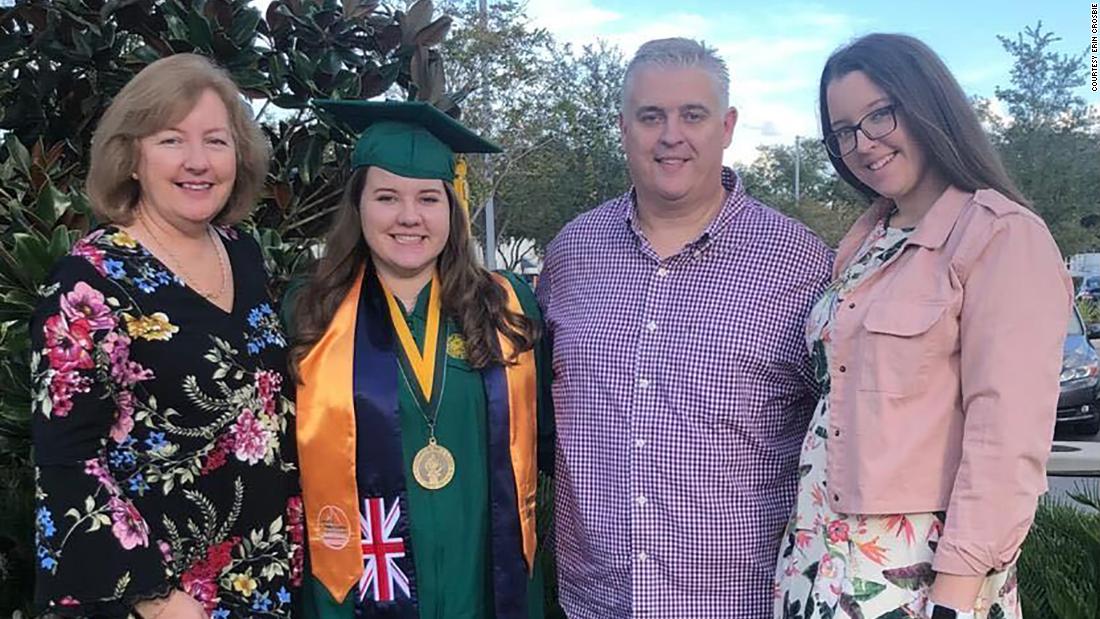 Erin Crosby Wants An Accommodation, But Flies The Union Jack In America

It is a real tear jerker, these ostensibly legal aliens—though, for the record, they are illegal aliens: they obtained a NIV under false pretenses, they were and are intended immigrants, they want to remain here forever.

Legally, that makes each of them what is called in the law an intended immigrant, which is defined as an alien coming to the United States with the intent to establish permanent residency in the United States. I am thinking their parents are doing the same thing, but fraudulently using the E NIVs.

In a recent interview for a program at her university, someone asked where she sees herself in 5 or 10 years.

She didn’t know what to say.

Well, she might not know where she will be in 10 years, but it is clear she intends to remain here, likely illegally if she does not get what she wants. What we should be doing is deporting Parvathinathan and the others in this article. We should also be investigating their parents’ businesses. Likely those enterprises are marginal at best and unlikely to have a significant economic impact on the United States, as required by law. And what is wrong with India and the U.K. anyway? Can’t you see yourself there?