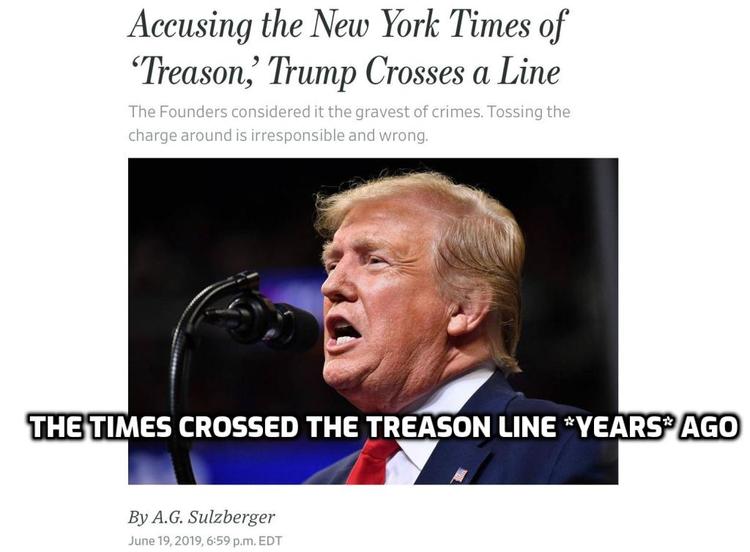 In the Wall Street Journal, the New York Times's A. G. Sulzberger whines that Trump, in accusing the Times of treason for revealing US Government secrets, has "crossed a line."

Is the same line that the Times crossed when they, and everyone else in the MSM, accused the duly elected President of the United States of betraying his country to Russia? See, for example, The Great Republican Abdication, by Paul Krugman, NYT, April 22, 2019: "The fact is that the occupant of the White House betrayed his country." 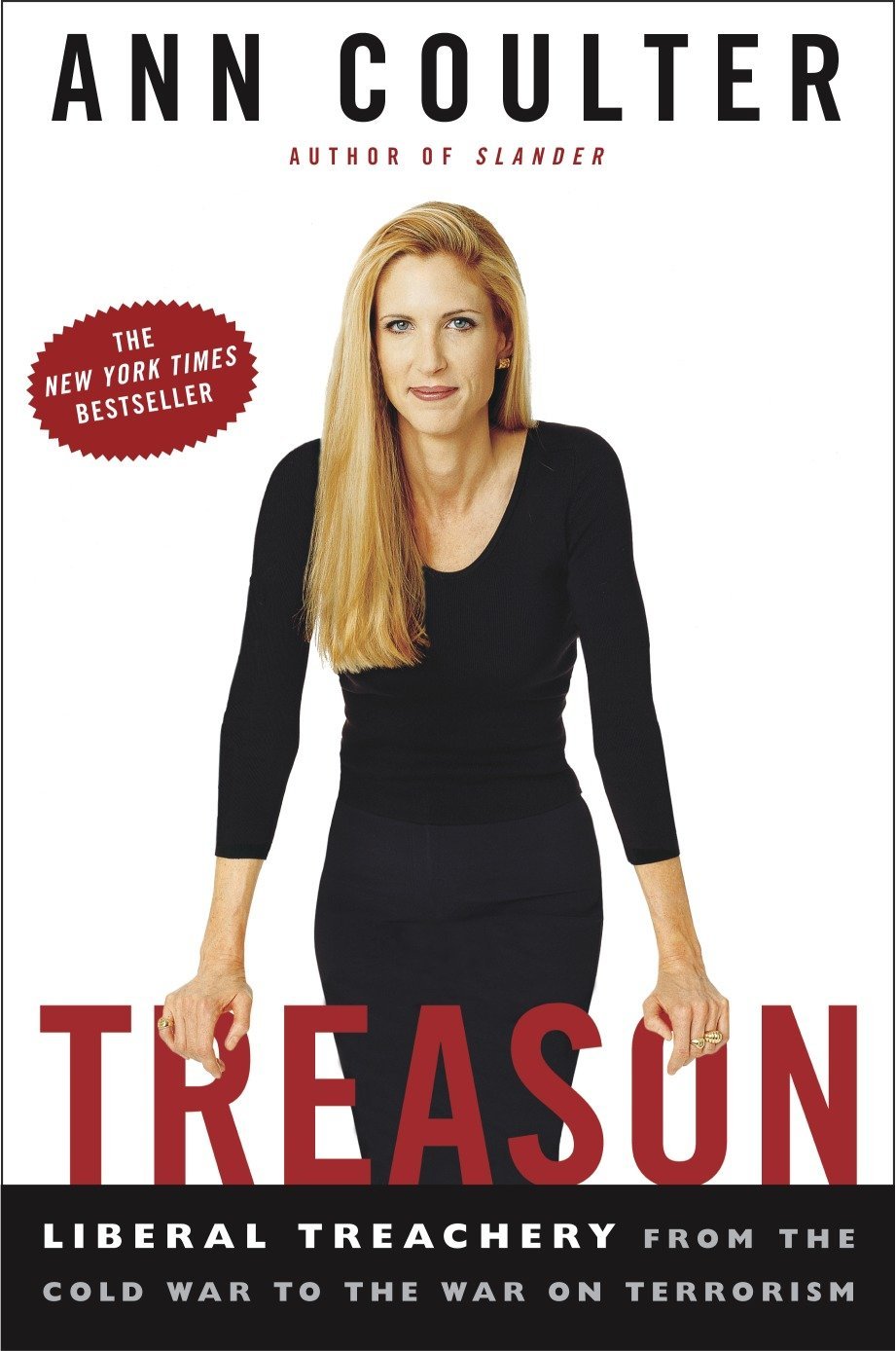 But long before Trump got elected, the Times was betraying America to Russia (during the Cold War) to the Viet Cong (during the Vietnam War) and even to Al Qaeda, during the War On Terror.

Seriously, the New York Times has been fighting against the United States of America all my life. In Treason: Liberal Treachery from the Cold War to the War on Terrorism, Ann Coulter wrote:

“Liberals could never figure out who the enemy was— other than an enemy called the United States of America. In the early 1970s, the current publisher of the New York Times, Arthur ‘Pinch’ Sulzberger, a college student and anti-war activist at the time, was asked by his father, the then-publisher of the Times, whom he would want to see shot if an American soldier came face-to-face with a North Vietnamese soldier. “

Spoiler alert—it was the American. I went to the 1999 book that was original source of Ann's book, and found this:

Arthur Jr.'s first arrest for civil disobedience took place outside Raytheon Company, a defense and space contractor. Wearing Punch's old marine jacket, [Punch was Arthur Sr, who served in the Marines in World War II] he joined other demonstrators blocking the entrance to the company's gates. "That was an easy one," he said. "The cops couldn't have been nicer." The second arrest came after a much less peaceful sit-in at the Federal Building in downtown Boston. His hands bound behind him, Arthur Jr. watched as the police slammed a handcuffed woman up against the wall of an elevator because she had made a taunting remark.

Punch held his tongue following Arthur Jr.'s first arrest, but when he got word of the second, he flew to Boston. Over dinner at Locke-Ober, a clubby bastion of Boston Brahminism, he asked his son why he was involved in the antiwar movement and what could be expected from him in the fixture. Arthur Jr. assured his father that his recent familiarity with the interior of Boston police vans was not the beginning of a trend.

Afterward, as the two men strolled around Boston Common, slightly tipsy. Punch posed what Arthur Jr. would later characterize as "the dumbest question I've ever heard in my life," and got "the dumbest answer."

"If a young American soldier comes upon a North Vietnamese soldier," Punch said, "which do you want to see get shot?" Arthur Jr.'s answer was calculatedly provocative. "I would want to see the American get shot," he replied defiantly. "It's the other guy's country; we shouldn't be there." To Punch, such sentiments bordered on treason, and he exploded in anger. "How can you say that?" he yelled as Arthur Jr. tried to defend his position. Years later Arthur Jr. remembered those tense moments on the Common as the worst fight he and his father ever had. "It's the closest he's ever come to hitting me," he said.[The Trust: The Private and Powerful Family Behind the New York Times, by Susan E. Tifft and Alex S. Jones, 1999, p. 499.][Emphases added.]

Arthur Jr. is, in case you didn’t know, the father of A. G. Sulzberger. When A. G. Sulzberger’s grandfather accused his own son of treason, for siding with the enemy in a war, was he crossing a line?

So since the 1980s until recently, the New York Times was controlled by one of the victors in the Vietnam War. But long before then, the NYT helped win the Vietnam War for the North Vietnamese (Pentagon Papers, anti-American propaganda) supported the Communists in America against not only Joseph McCarthy but against anyone who might investigate them, and more recently, as Ann Coulter pointed out, supported the enemy in the War On Terror. (In 2006, Michelle Malkin wrote a column called The Terrorist-Tipping Times about, among other things, a reporter who literally tipped off the Muslim targets of a Homeland Security investigation.)

So the New York Times has always been an enemy of the people. The difference is that we now have a President who will say that.