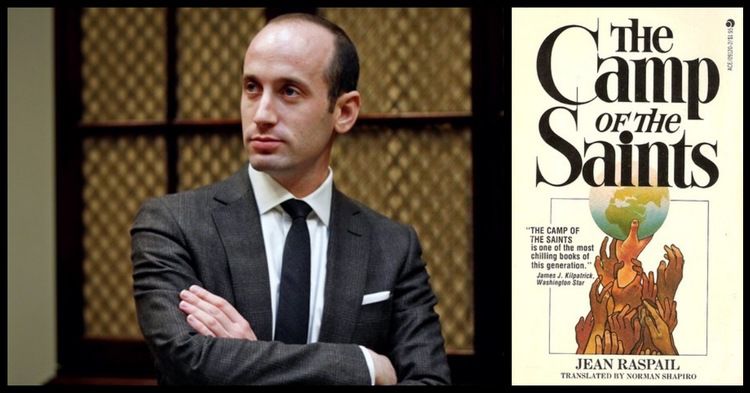 Earlier: Trump on Camp of the Saints: "I Think What Has Happened to Europe Is a Shame"

The New York Times sallied forth on Friday with yet another hit piece on Stephen Miller, the aide to President Trump whom the newspaper attacked as a “white nationalist” because he not only CrimeThinks but also CrimeReads. Miller reads VDARE.com and, has, gasp, read Camp of the Saints.

Friday’s installment of the Get Miller campaign purported to discuss in detail Jean Raspail’s apocalyptic novel, headlining its piece this way : “A Racist Book’s Malign and Lingering Influence.”

That judgment in this fine example of all the news that’s fit to print comes from three people. $PLC’s Heidi Beirich, who wrote the original screed that put Miller in the crosshairs of the Times; “Jean-Yves Camus, [Tweet him]an expert on the far right at the French Institute for International and Strategic Affairs;” and “Cécile Alduy, [Email her] a professor of French studies at Stanford University who has studied the discourse of the French far right.”

If you want to know why the Times has become a joke, read the whole thing, and take note of one line that suggests those who hate the book haven’t read it very closely.

“The Trump administration’s anti-immigration policy is a direct consequence of taking ‘Camp of the Saints’ as a blue book for governing,” Alduy told the Times’s writer.

No, Trump’s “anti-immigration policy” is not a “direct consequence of taking ‘Camp of the Saints’ as a blue book for governing.”

If Trump had taken the book as a “blue book for governing,” he would have done nothing to stop the illegal-alien invasion from Mexico and Central America and even China and Africa. Or he would have opened the borders completely. That’s what “governing” in Raspail’s dark vision is: doing nothing or deliberately doing the wrong thing.

The novel’s crisis isn’t merely the “migration,” MSM code for invasion and colonization, of a million penniless illiterates who sail from India. The other important aspect of the plot is that Western governments in general and the French government in particular do nothing to stop it. Indeed, top government officials encourage the migration. The Leftist media and Pope-Francis-like Catholic prelates demand it.

Most likely, Alduy meant to say the novel is a blue book for those who think it correctly predicts what will come to pass if the colonization continues, which is what really worries Beirich, the Times, and the rest of the radical left.

Camp of the Saints regardless, conservatives are openly discussing and resisting The Great Replacement that Beirich & Co. concomitantly claim is a crazy “conspiracy theory” even as they openly praise and brag about it. If the resistance succeeds, the planned importation of a bazillion Third World Colonists to brown the country and cement Democrat power forever might fail.

That’s why the Times has published not one but two hit pieces on Miller within a week. The second piece, amusingly enough, purports to be a neutral evaluation of a book despite a headline and one-sided account that declares the book “racist” as if such a claim were objective truth.