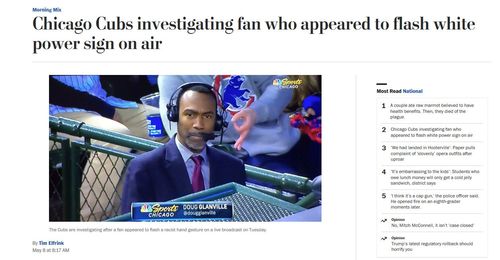 On a chilly Tuesday night at Wrigley Field, the cameras cut to former outfielder Doug Glanville, now an analyst for NBC Sports Chicago. As Glanville praised Chicago’s resurgent offense, a bearded fan in the background mugged for the camera.

Then, the fan in a Cubs hoodie formed his hand into an upside-down “OK” sign, holding it next to Glanville’s head until the camera cut to a graphic.

…The Cubs say they’re investigating the “offensive hand gesture,” and threatened to ban the fan for life.

… It’s now become ubiquitous at far-right gatherings, the Southern Poverty Law Center notes, making it nearly impossible to untangle its ironic use from those meaning it as a straightforward slur. That’s actually the idea.

“The point of the stunt would be to get liberals wound up, so they can then claim that liberals are just imagining things,” noted Salon writer Amanda Marcotte in September….

In his statement, Kenney pledged that the team would take the on-air gesture seriously.

“Any derogatory conduct should be reported immediately to our ballpark staff,” he said. “Any individual behaving in this manner will not only be removed from the ballpark, but will be permanently banned from Wrigley Field.”

But at least, unlike that kid in Kazakhstan, he wasn’t holding a blank piece of white paper.