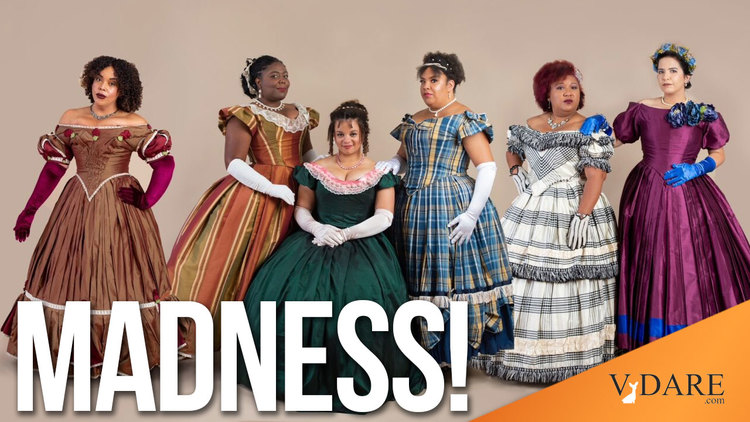 San Francisco’s annual Great Dickens Christmas Fair for people who like dressing up in Victorian costumes as characters from A Christmas Carol was founded a half century ago by the Patterson family, who’d earlier launched the Renaissance Pleasure Faire in the San Fernando Valley. (I’d guess that Burning Man is a spinoff of the same urge among those looking for a hipper alternative.) It has 1,400 volunteers.

But this being 2021, several black ladies who enjoy dressing up like Queen Victoria or Scarlett O’Hara are having a meltdown which Must Be Taken Seriously. From the San Francisco Chronicle:

For her first Great Dickens Christmas Fair in 2015, LaToya Tooles fashioned a gown out of dollar-store hula hoops and a tablecloth. A friend had invited her to the annual event, a festive re-creation of 19th century London inspired by the works of Charles Dickens that has been running in San Francisco for nearly 40 years.

Almost as soon as she arrived at the antique winter wonderland, she joined the revelers on Fezziwig’s dance floor and didn’t stop waltzing for hours.

“I met some of my greatest friends at the Dickens Fair,” says Tooles, who went on to join the event’s volunteer cast, taking on bigger roles and more responsibility each year.

Her history with the tight-knit fair community is what makes the past two years so heartbreaking for Tooles, who is one of a small number of Black cast members at the Great Dickens Christmas Fair. What started as a goodwill effort to help rectify what is seen as the event’s failure to protect its volunteers and guests from racist and sexist behavior has turned ugly. Now, more than 200 cast members and thousands of guests have pledged to boycott this year’s fair, which is set to return to the Cow Palace on Saturday, Dec. 4, in a scaled-down, drive-through experience for the next three weekends.

“I want people to recognize what their values are and decide if the Dickens Fair aligns with them,” says Tooles, founder of an affinity group for the fair’s Black performers called Londoners of the African Diaspora, or LoAD.

Organizers of the boycott, a group of Dickens Fair cast and crew dubbed the London Solidarity Network, won’t support a return to the fair until a list of safety requirements is met.

Blacks have been shooting blacks in huge numbers since the Racial Reckoning Riots began in May 2020, but the real problem is black safety at the Great Dickens Christmas Fair.

… But now, after months in which nearly every corner of public and corporate life has faced a racial reckoning, this year the fair is facing its own opposition.

While less has been said about equity issues in hobby and play spaces, the fight against discrimination in those spaces can be more complex. Americans dedicate an average of five hours a day to leisure and sports activities, but these arenas often lack formal organizational structures for initiating or carrying out substantive change.

For Black people, the harm can be multiplied when they find themselves facing discrimination in spaces where they are going for rest and relaxation — especially when their hobby involves pretending to exist centuries ago, in places where equality and safety for marginalized people were even further out of reach.

“Every member of LoAD has been called a slave,” says Anastasia Elizondo, an Afro-Chicana actor and comedian from Oakland who has been performing at the Dickens Fair for nearly 20 years. She adds that fairgoers’ limited knowledge of Black history can lead to offensive generalizations and assumptions. “One of us has been called Aunt Jemima, another Sally Hemings.”

Angel Dotts, who is biracial and calls herself a Dickens “Fair brat,” started attending with her parents when she was a toddler. She says she’s used to being one of the few brown faces at the fair, but when her husband, a Black man, started attending, she began to understand what the situation was like for attendees of color. Despite having a cast member pass, she says he was stopped at every security gate — not just by hired security officers, but also by fellow fair participants, and looked at with suspicion by vendors.

“His experiences started to make me recognize that this was not a safe space,” Dotts says.

It’s striking that behaviors that actually can make spaces safer, such as checking passes and eyeballing males who look out of place, are now considered proof positive that the space is unsafe for The Only People Who Matter.

According to others in the world of historical costuming and re-enactments, what’s playing out in the Bay Area is not an anomaly.

“Dickens is one great example of what’s been going on in these places for a while,” says Bianca Hernandez-Knight, a lifetime member of the Jane Austen Society of North America.

Hernandez-Knight recently resigned from all her roles on the society’s national board after months of a back-and-forth with the group’s leadership over a proposed (and ultimately rejected) diversity statement.

“This all relates to a bigger conversation around how people view history,” she said. “The issues we are facing in historical costuming spaces and the backlash to critical race theory — I genuinely think those things are very similar. There are people who just really need their history to be as whitewashed and as comfortable for them as possible.”

… For Ari Yovel, who is autistic and transgender, the current conflict LoAD members are facing parallels [to] their own struggle to advocate for marginalized communities within the fair. For years, Yovel advocated as a representative of the Order of the Golden Needle, a neurodivergent advocacy group, for a de-stimulation space within the fair, or “de-stim” room. “Each time, I was met with the sentiment that even though they took my requests very seriously, they just couldn’t possibly do anything about them. All the while, I was being paraded out as a poster child for how progressive and cooperative RBP (Red Barn Productions) were,” says Yovel, who is boycotting this year’s fair and is unsure if they will ever return.

In June 2020, when Red Barn Productions released an emphatic statement of support for the Black Lives Matter movement, LoAD saw an opportunity to ensure the company’s actions aligned with its words.

At Red Barn’s request, LoAD members spent weeks researching and crafting a meticulous 53-point plan that addressed developing a standardized method for reporting harassment and discrimination, ensuring increased representation of Black, Indigenous and people of color at the fair, conducting mandatory antidiscrimination training and hiring HR and diversity and inclusion professionals. It also asked that Red Barn discontinue a tradition of portraiture casting, a practice that casts only people with an aesthetic resemblance to a historic character.

Why shouldn’t black ladies be cast as, say, Florence Nightingale, Prime Minister Disraeli or Charles Darwin just because it would be confusing to the audience? But, of course, Frederick Douglass must never be played by a non-black.

But after LoAD submitted the initiative in August of last year, Tooles and others said, Red Barn continually refused to engage with the document or complete the requested review steps. What LoAD felt were requests for simple acts of solidarity — such as making a public statement to condemn a racist post by a longtime fair vendor — were met with resistance. …

… For LoAD member Leandra Darden, however, the moment brought a revelation.

“The community proved to me that it was unwilling to protect itself, not just me,” she said. “I really believe that if white women don’t demand things, Black women cannot get them.”

At the scheduled May 6 meeting, [LoAD] issued a statement of no confidence in Red Barn Productions to manage the Dickens Fair. It also demanded the formation of a supervisory board and the hiring of a qualified HR consultant and a diversity and inclusion professional. The group set a deadline of May 14 for Red Barn to agree to those terms or face public exposure and a possible boycott.

“Our trust had been broken too many times,” says Tooles.

In the months since, Red Barn has made a human resources hire, launched a “Red Flag Reporting System” for people to anonymously report any improper activity, and engaged a diversity and inclusion firm, Hummingbird Humanity. It has a new single-page DEI Commitment statement that “encourages” BIPOC representation rather than requiring it, and is asking that all Dickens cast, crew and vendors sign it and pledge to be better.

Red Barn says its full statement on diversity and inclusion should be finished early next year. …

Red Barn, however, has declined to create a supervisory board, something LoAD members see as non-negotiable.

“We’re a privately held company, not a nonprofit organization, we’re not going to be governed by a board,” says Patterson. …

The contentious negotiations with the fair’s administration has soured many former devotees on an event that once seemed magical.

“I love making old dresses. I love dancing. But I do not love them more than the safety and well-being of myself and others who are marginalized,” says Tooles.

More than 200 former participants, including members of LoAD and other affinity groups, will be boycotting the event with Tooles. In solidarity, several of its traditional performing groups — including Jeremy’s Escort Service, Fezziwigs, the Royals and the Fairies — have declared that they will not participate. More than 3,000 cast and crew members, vendors and guests have also committed to boycott. …

“But that’s our history, though, isn’t it, as Black people in America? People love to say, ‘Look at these amazing Black women. Look what they’ve done’ — until it no longer benefits them. Then they’re gonna push us to the front and let us take the bullets.”

About this story
This story was produced in partnership with Represent Collaborative, a San Francisco media initiative focused on issues of racial and social justice that works to produce stories about Black and brown communities. Learn more at www.representcollaborative.com.