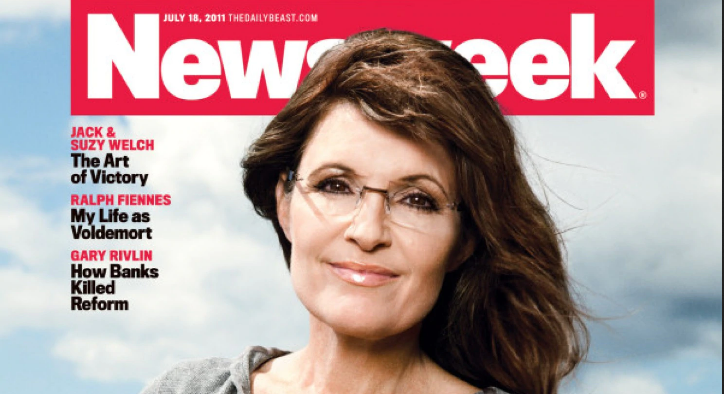 "They Flaunt Themselves"—Sarah Palin On The Cover Of Newsweek

Via Kathy Shaidle, I see that various stupid people are objecting to this photo of Sarah Palin on the cover of Newsweek. In the Daily Caller, Matt Lewis writes

"Folks want to be able to envision someone sitting in the Oval Office," writes The Washington Post's Jonathan Capehart of Sarah Palin's Newsweek cover. "They don't necessarily want to envision [a president] in the pages of Esquire magazine's "Sexiest Woman Alive 2011"? or Maxim."

The comparison seems like a stretch. But accurate or not, Capehart's contention is sure to spark controversy.

He goes on to add that Palin "can't possibly be taken seriously as a presidential contender dressed like that, especially since this is the second time she has given Newsweek a less-than-presidential pose."

Note: The other Newsweek cover Capehart references was intended only for Runner's Worldmagazine. A photographer leaked the photos, and Palin later called Newsweek's use of them "sexist."

It immediately reminded me of something I read in a pre-feminism Keith Laumer science fiction story, in which a secretary has been accused by an alien of "flaunting" parts of her anatomy that aliens aren't interested in:

"Certainly not, Miss Braswell. They flaunt themselves."

No possible picture of Palin can stop her looking like that. She can't help it.

Jonathan Capehart is a gay black man living in the District of Columbia. His opinion of how normal Americans will react to a photo like this is not likely to be useful. Oh, and there is an explicit double standard here—Candidate Obama allowed himself to be photographed shirtless bodysurfing in Hawaii.

I don't know what Capehart envisioned when he saw that, and I don't want to.