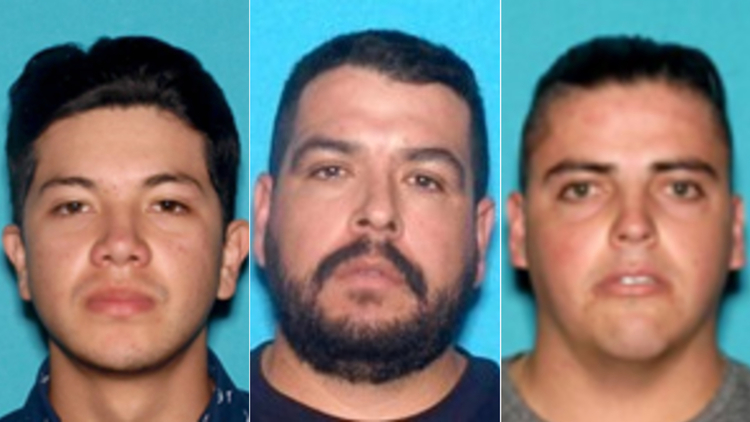 It is an MSM stereotype that "anti-maskers" are right-wing white lunatics, and another that people who shoot off assault rifles are right-wing and white. It's true that an elderly white man can "go viral" after "ranting" about masks, but violence over masks is more of minority thing...without going viral, of course. (See here and here.)

The same is true about the MSM stereotype about white gunmen. If whites engage in "open carry" of rifles, or self-defense, it's the worst thing ever. When a member of a minority group gets his hands on an assault rifle, much worse things happen, but it's forgotten the next day.

So when you see three guys who weren't allowed into a strip club because they weren't wearing masks, and then came back with an assault rifle, you need to know that this isn't a MAGA phenomenon, nor yet a Gun Culture 2.0 phenomenon, it's a Hispanic criminal subculture of Orange County, CA phenomenon.

Three men were charged for their role in a drive-by shooting that left four people wounded inside an Anaheim strip club on Halloween, officials announced Monday.

The men, all residents of Anaheim, were at the Sahara Theatre strip club, located at 1210 State College Blvd., in the early hours of Oct. 31, according to the Orange County District Attorney’s Office. After being physically removed from the club for failing to wear face masks, they shot at the strip club with an AK-47 assault rifle, authorities said.

Edgar Nava-Ayala, Daniel Juvenal Ocampo, and Juan Jose Acosta-Soto — who all pleaded not guilty — are accused of driving back to the club after they were removed, with a loaded AK-47. Nava-Ayala is accused of shooting at least 15 rounds into the business, injuring two employees and a customer.

There were about 30 people inside the club at the time, police said.

The three victims sustained gunshot wounds to the upper body. One of them had to undergo surgery and another suffered a shattered left scapula, prosecutors said.

3 men charged for shooting at Anaheim strip club after they were removed for failure to wear masks: OCDA, by Sareen Habeshian, KTLA, December 21, 2020

The Sahara Theatre strip club has, apparently no license to serve drinks, and not a particularly savory reputation in the first place. They have "lap dances" , and that means it's more like a "massage parlor" than a night-club

The Google reviews, many by people with Spanish names and some actually in Spanish, say things like:

So can we definitely not blame this one on Trump, and the "right-wing"? These guys are what he ran against in 2016.