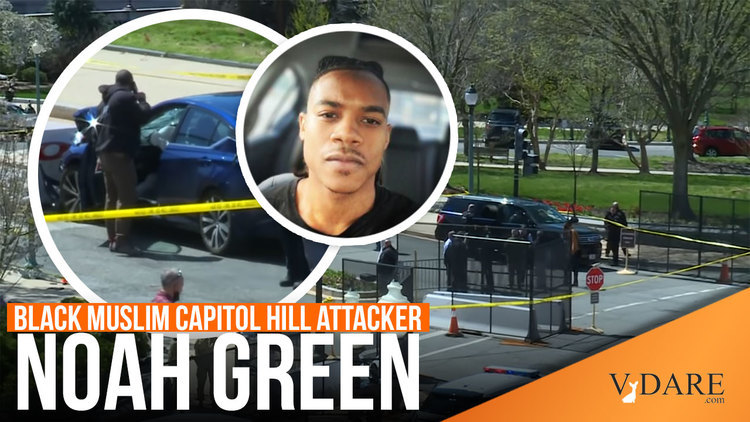 This Black Muslim who killed the Capitol cop sounds like he had been a decent guy of the racialist hotep variety, but then started, perhaps, going schizophrenic in his mid-20s. (Black men suffer schizophrenia at an elevated rate.) And the society-wide anti-white insanity of the Racial Reckoning makes this a particularly bad time to go nuts.

Noah R. Green had been distressed but had no known history of violence when he rammed his car into two police officers, killing one and injuring another before being killed himself.

On the football field at Christopher Newport University in Virginia, Noah R. Green was No. 21, a dependable and good-natured, if soft-spoken, presence in the defensive backfield. Off the field, he was laser-focused on Black economic empowerment, counseling teammates on financial management and plotting a career helping close the racial wealth gap.

But by late March, after a bruising pandemic year that friends and family said left him isolated and mentally unmoored, Mr. Green’s life appeared increasingly to revolve around the Nation of Islam and its leader Louis Farrakhan, who has repeatedly promoted anti-Semitism.

Farrakhan also has repeatedly promoted anti-whiteism, but, as my spellchecker informs me, that’s not a word, so the entire concept is simply inconceivable.

… Without a clear motive, investigators were frantically combing through a trove of social media posts and a trail of woes described by people close to Mr. Green to understand what happened.

Police have not categorized the incident as an act of domestic terrorism. A senior law enforcement official, who spoke anonymously to describe the active inquiry, said that, based on early evidence, investigators believed that Mr. Green was influenced by a combination of underlying mental health issues and a connection to an ideological cause that provided justification to commit violence. …

A Black nationalist movement that has pushed for African-American self-sufficiency, the Nation of Islam has been condemned by the Southern Poverty Law Center for “the deeply racist, anti-Semitic and anti-gay rhetoric of its leaders,” including Mr. Farrakhan.

Mr. Green’s adherence is likely to increase scrutiny on the group, as investigators try to determine whether his beliefs played a role on Friday’s attack. The relationship between violence and the Nation of Islam has been debated since it started about 90 years ago, especially as outsiders and insiders have disagreed over its teachings.

“From the earliest times in Nation history, people have been taking these texts and saying, this is about killing white people,” said Michael Muhammad Knight, an assistant professor of religion and cultural studies at the University of Central Florida, who specializes in American Islam.

“The Nation has a very strong anti-violence discourse that goes all the way back to the beginning,” he said. “Consistently, if you look at the Nation, you don’t see the body count that white supremacist organizations have.”

Besides Malcolm X. And the Black Muslim Zebra Killers were convicted of murdering 15 whites in Northern California in the 1970s and may well have murdered 50+ more. But those were white bodies, not Black bodies, so they don’t count in the body count.

Here’s an interesting angle on the early years of the Nation of Islam from U. of Idaho historian Richard Spence’s course on Japan’s ultra-nationalist Black Dragon Society in his lecture series on Secret Societies:

After World War I, the Black Dragons saw America as Japan’s new No. 1 enemy. And they saw racism as America’s Achilles’ heel. In 1920, a Black Dragon agent named Yusichi Hakida made contact in New York with ‘black nationalists’ who advocated political and economic autonomy for African-Americans.

Hakida believed that racial discrimination made African-Americans open to influence. Black Dragon propaganda claimed that Japan was the great champion of all ‘colored’ people against white oppression. This theme would be exploited with some success by another Black Dragon operative who appeared in Chicago in 1932.

He called himself Colonel Satokata Takahashi. … He disappeared from his Tacoma, Washington home in 1926, and later resurfaced in Chicago and Detroit. In those cities, he cultivated black separatist organizations, such as the Universal Negro Improvement Association and the new Nation of Islam.

The Little Colonel—as Takahashi was nicknamed—formed a close friendship with Nation of Islam leader Elijah Muhammad, and he was the guiding hand behind two other organizations: The Society for the Development of Our Own, and the Pacific Movement of the Eastern World.

These organizations targeted disaffected African-Americans and preached that Japan was the champion of non-whites.

Interestingly, the Nation of Islam first came to public awareness in Detroit in 1932 when a member murdered a stranger as an act of human sacrifice. It emerged that several other attempts at human sacrifice had been perpetrated. Eventually, W.D. Farad, founder of NoI and putative supreme being, was informed that his presence was no longer appreciated in Detroit, so he betook himself to Chicago, where he disappeared in 1934. Elijah Muhammad emerged as the new leader of the cult and, following his death, Louis Farrakhan took over.

And so here we are.