TORONTO STAR: Shepard Fairey Is Practically as Racist as Trump

From the Toronto Star:

Wrapping Muslims in flags stifles the struggle for equality

Equality does not come from a Muslim woman wearing an American or Canadian flag hijab, but from the unravelling of injustices that these flags represent. 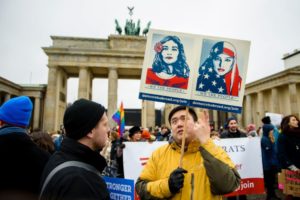 A demonstrator holds up a poster from the “We the People” campaign of artist Shepard Fairey in Berlin, January 21, 2017, one day after the inauguration of U.S. President Donald Trump.

The drawing of a Muslim woman wearing an American flag as a hijab has become one of the most iconic images of resistance to President Donald Trump, raised on protest signs and shared on social media accounts around the world. The picture is part of artist Shepard Fairey’s “We the People” poster campaign, a series of stylized representations of people demonized by Trump: a Latina woman, a black woman, and the Muslimah draped in stars and stripes.

It is telling that the Muslim figure is the only one depicted by Fairey as parading her patriotism on her body. This is a sign of how deeply the suspicion that Muslims are a foreign enemy force has been ingrained – so that our loyalty must be overtly displayed, worn figuratively on our sleeves if not literally on our heads.

In Canada, too, proclamations of Muslim patriotism have been seen as a way of combatting Islamophobia. Last year, for example, the Canadian-Muslim Vote initiative embarked on a project to erect Canadian flags in front of every mosque in the country.

But the compulsion to swaddle Muslims in flags is not a cure for Islamophobia – in fact, it is one of its symptoms. Instead of acceding to the demand placed on Muslims to profess their loyalty loudly and repeatedly, we should ask why Muslims are required to engage in such exceptional professions of allegiance in the first place.

“The idea of the ‘conspiratorial Muslim’ long preceded [Donald Trump],” notes Kevin Schwartz, research fellow at the Library of Congress and former visiting professor at the United States Naval Academy. “It is the outcome of a staggering array of policies and cultural practices, kept alive by a general complex of power, surveillance, entrapment, and Islamophobic think-tanks that have perpetuated, peddled, and promoted its narration.” (According to a 2016 report by researchers from the University of California, Berkeley and the Council on American-Islamic Relations, 37 groups in the U.S. “whose primary reason for existence is to promote prejudice against or hatred of Islam and Muslims [ . . . ] had at least $119 million in total revenue between 2008 and 2011.”)

The basic idea underlying Islamophobia is the unfair and fallacious assumption that Muslims as a whole should be subject to collective suspicion because of the actions of a few. Like the denunciations of terrorism that Muslim leaders and organizations regularly deliver, ostentatious expressions of Muslim patriotism fail to displace this fundamentally flawed premise.

Exhibitions of flag-wrapping also obscure the oppression and exclusion lying behind the flags.

We should recognize that flags are not only symbols of national pride but are simultaneously symbols of national violence: Canada and the United States were built on the dispossession and genocide of Indigenous peoples, the enslavement of black people, and the exploitation of migrant workers.

The American and Canadian flags may represent rights and freedom and justice on one side – the side that we proudly wave – but they are signs of colonialism and racism and militarism on the other.

This is why NFL quarterback Colin Kaepernick refused to stand for the U.S. national anthem at football games; “I am not going to stand up to show pride in a flag for a country that oppresses black people and people of colour,” he said.

Equality does not come from a Muslim woman wearing an American or Canadian flag hijab, but from the unravelling of injustices that these flags represent.

Azeezah Kanji is a legal analyst and writer based in Toronto.

Other articles by Azeezah Kanji include:

Being Muslim in Canada: Subverting stereotypes and challenging narratives

How has “Allah” become code for “terrorism?”

Personally, I blame Ms. Kanji’s hostility toward Canada on Trump. I mean, what else could be the cause?