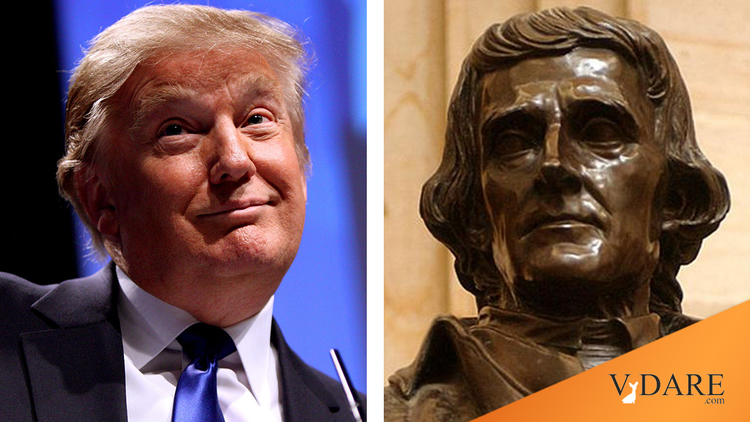 Trump Was Right Again... This Time About Thomas Jefferson

In the immediate aftermath of the Unite The Right antifa riot, President Donald Trump (who appears to be the only person who actually watched the videos from Charlottesville) warned that the removal of statues of Confederate leaders would ultimately lead to the destruction of our Founders.

The Main Stream Media mocked him for this:

The Washington Monument towers over the nation’s capital, jutting more than 500 feet into the sky.

Its sleek and steely structure represents the resolute character of America’s first president, whose unwavering leadership was crucial to the country’s founding.

Last weekend’s violence-plagued white nationalist march to protest the planned removal of the Lee statue has sparked a renewed national debate over Confederate monuments. And it’s also been joined by dire warnings, from no less than the president of the United States, about the potential erasure of iconic memorials to the country’s Founding Fathers.

President Donald Trump has decried calls to remove the “beautiful” Lee statue, and others honoring the Confederacy, claiming that the nation’s “history and culture is being ripped apart” and asking where it might end.

"This week it’s Robert E. Lee. I noticed that Stonewall Jackson is coming down. I wonder, is George Washington next week and is it Thomas Jefferson the week after? You really do have to ask yourself: 'Where does it stop?'" Trump asked at a Tuesday press conference...

Is the president right about the impending threat to the founders? Historians who spoke to NBC News said such fears are slightly misplaced and that Trump is championing a murky interpretation of history.

All three agreed that the main distinction is how men like Washington served their country compared to men like Lee.

Fast forward to today, when Thomas Jefferson is being removed from New York City. Once again, the experts were wrong. Once again, Conservatism Inc.'s triangulation was useless [Will the Left Stop with Robert E. Lee?, by Gregory Hood, American Renaissance, April 13, 2018]. Once again, we have the bittersweet satisfaction of saying we told you so.

I have mixed feelings here on two fronts.

First, Jefferson was so great a man that his statue is worth more than the actually existing New York City Council. So it's a kind of strange victory. I hope we can provide the statue a good home.

Second, Thomas Jefferson arguably enabled the long process that is ending in his dishonor. He opposed primogeniture, the very system that enabled his lifestyle and accomplishments. He bought in entirely to the Enlightenment myth about rationality and progress. He wrote the words "all men are created equal," a self-evident lie. It's true that he didn't mean these words in the same way that they are understood today [The Declaration of Independence Is for Whites, by Gregory Hood, American Renaissance, July 10, 2018].

Nonetheless, ideas are taken to their logical conclusion. We would all be spared a great deal of trouble if Jefferson had just stock with the defense of "life, liberty, and property."

The bigger pattern is that, once again, Donald Trump saw more clearly than the "experts" where this was going. At some level, he understood that you can't build a country on self-hatred. We are told that we must be on guard for right-wing "insurrectionists" who are threatening "Our Democracy." At the same time, our rulers lecture us on the evils of the Founding and muse that the world would be better off if Europeans never came to the New World.

The historic American nation is being replaced and dispossessed. This isn't a natural process. It isn't inevitable. It's being done on purpose by those who hate us. Those who believe that there is a limit to this process of entropy will keep being proven wrong. It didn't stop with Confederate generals, it won't stop with the Founders, and it won't stop with Teddy Roosevelt. It won't stop until we are just another failed Third World country.

What will stop it? American resistance. The country is ours, we built it, we sustain it, we define who is and isn't American. Until we can say this openly, the process of destruction will simply get worse... and Conservatism Inc. will continue to simply be a phony opposition.