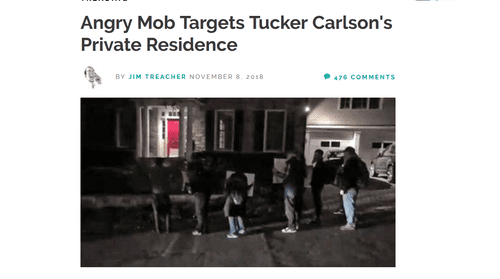 Tucker Carlson And The TURBAS: Unpunished Leftist Violence, Now Standard, Has Been Experienced By Dissident Right For Years

Jim Treacher of PJMedia has a tribute to his former boss, Tucker Carlson, who hired Treacher based on his anonymous blogging in 2009. [Angry Mob Targets Tucker Carlson's Private Residence, November 8, 2018]

Tucker Carlson flew halfway across the country on a moment's notice to hire a guy whose real name he didn't even know. He launched me from complete obscurity to somewhat less complete obscurity, just because he liked my blogging. I'd think it was crazy, if it hadn't happened to me. Actually, I still think it's crazy. I am eternally grateful that the man is out of his mind.

So that's why this report makes Treacher especially angry:

A left-wing mob showed up outside Fox News host Tucker Carlson’s house Wednesday evening, posted pictures of his address online and demanded that he flee the city of Washington, D.C.

Carlson, a co-founder of The Daily Caller and host of “Tucker Carlson Tonight,” was at the Fox News studio when the angry crowd showed up outside of his house...

Video the group, “Smash Racism DC,” posted to Twitter shows one of the mob’s ringleaders leading the crowd in chants of “racist scumbag, leave town!” and “Tucker Carlson, we will fight! We know where you sleep at night!”

Treacher reproduces a tweet from the antifascists (i. e. fascists) who did this: 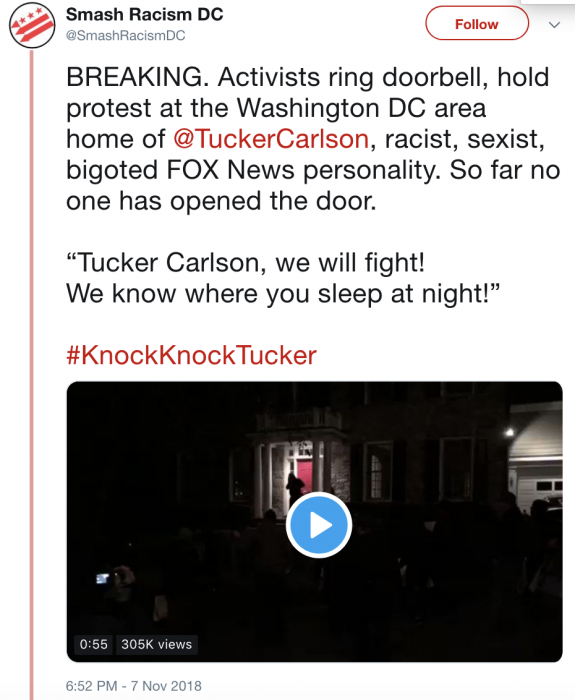 The Washington Post has a report which repeatedly calls the mob "protesters," and doesn't seem to say any of them were arrested.  [‘They were threatening me and my family’: Tucker Carlson’s home targeted by protesters, by Allyson Chiu, The Washington Post, November 8, 2018]

This has been happening since Trump started campaigning in 2015, and I've been compariing them to the turbas divinas (government-sponsored mobs) used by the Sandinistas in the '90s.

However,  if you're a Dissident Right conservative, a patriotic immigration reformer, or anyone who talks about IQ, this has been going on for years and years. Ask Jared Taylor, for example.

In 2012, for example, after a violent antifascist attack on some far-right people in Chicago, I noted that

Edith Efron noted as long ago as 1971 in her book The News Twisters the tendency of the media to refer to physical attacks on conservatives as “protests.” “Hecklers Throw Empty Drink Cans At Wallace” was one of the headlines she pointed to, noting that throwing things at people is not the same as heckling.

The Leftist Nicaraguan government  in the Eighties used to have government-controlled youth mobs called turbas divinas that would attack people who resisted the government. The real Fascisti of Italy in the Thirties did this too.

When there was white minority rule in the Jim Crow South, the Ku Klux Klan was unlikely to get in trouble with the authorities.

These anti-racist people are the same thing.

And they’re Obama’s kind of people. Except for their notable pallor (these "anti-fascists" are as white as the Tea Party and their kindred Occupy Wall Street types) they’re exactly the type of “community” that “community” organizers organize.

They’d be as happy, if organized in a sufficiently large community, to tear into a Republican Convention as a Nazi gathering. They really don’t see any difference. Remember all the Bush=Hitler signs?

Canadian blogger Kathy Shaidle points out that being a conservative requires Ann Coulter "to take the stage with bodyguards" and Glenn Beck "to wear a bullet proof vest and carry a handgun."

Tom Tancredo also has a bullet-proof vest because of many specific, serious, threats against his person.

Ann Coulter is not paranoid—she has a well-founded fear that if you're a conservative speaker, people will mount the stage to attack you physically, liberal pundits will cheer them, and the police will do nothing, because all this has already happened to her. See her articles

If an adorable blonde person like Ann Coulter can’t get justice when she’s attacked, how much chance do neo-Nazis, or anyone who can be called Neo-Nazis, have? (If they’re blonde at all, they’re blonde in entirely the wrong way.)

And if that leads to all dissident meetings being closed down, because restaurants and hotels are afraid of the consequences (as has repeatedly happened to the American Renaissance conferences, with a mysterious lack of reaction from police and press) then “anti-fascism” will have brought real fascism to America.

And here it is.