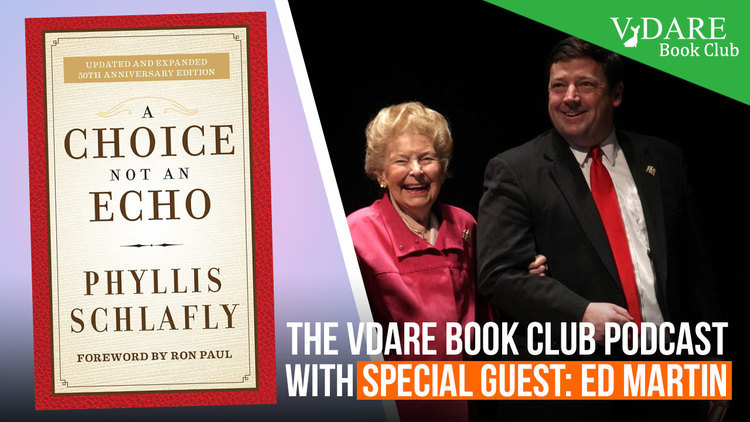 Phyllis Schlafly was probably the single most effective activist produced by the conservative movement in its entire history. We can think of few examples when conservatives actually defeated a Leftist initiative outright rather than just slowing it down. Yet that is precisely what Phyllis Schlafly did with the so-called Equal Rights Amendment (ERA). She put a stake in this contemptible exercise in social engineering. Leftists are only daring to bring it up again because she is gone.

For decades, she was the authentic conservative voice of the grassroots from her home base in St. Louis, Missouri. It was a voice that was so influential that it could cow even the most sold-out Republican politician. And in what proved to be the last election cycle of her life, I believe it was her endorsement (or at least her statement that candidate Donald Trump was “the last hope for America”) right before some critical primaries that pushed him to the GOP nomination [Top conservative: Trump is ‘last hope for America,’ WND, December 20, 2015].

There was simply no other person who had the credibility that Mrs. Schlafly did among conservative voters. Her pro-Trump statement at that critical time broke much Conservate Movement resistance to President Trump. Whatever we may say about the Trump Administration, the GOP base’s position on trade, immigration, foreign policy and other issues is far closer to “America First” today than it would have been if Jeb Bush or some other candidate had run (and lost) against Hillary Clinton.

Yet few understand how truly influential she was. The ERA fight may have been her most publicized victory, but Phyllis Schlafly was fighting against what she called “the Eastern Establishment” and “the Kingmakers” from the beginning. She deserves just as much credit for the Cold War victory as any politician. And her 1964 book A Choice, Not An Echo (which I’m proud to say I have one of the original editions of as well as the updated edition), is remarkably prescient.

Though it doesn’t directly address immigration, the book’s passages about corporate interests buying out the GOP, the eagerness of Republicans to lose rather than win with unrespectable positions, and the call for “America First” are as important today as they were when young activists were working for Barry Goldwater. Her perspective on the original America First movement and almost forgotten conservative heroes like Senator Robert Taft is also critically important if you want to understand what went right (and what went wrong) with the American Conservative Movement. It’s even more remarkable when you consider that this smash bestseller was just one of her many books in between managing organizations and conferences and raising her family. Her sheer productivity put all of us to shame.

I recently had the privilege to talk to her long-time lieutenant Ed Martin (@EagleEdMartin), President of Phyllis Schlafly Eagles and host of the Pro America Report. He’s a great activist in his own right whose influence is only growing. We discussed A Choice, Not An Echo, this past month’s selection for the VDARE Book Club. We covered immigration, Mrs. Schlafly’s views on the Trump movement, and where conservatives go from here. He also referenced Phyllis Schlafly’s resounding defeat of William F. Buckley on the latter’s Firing Line program. You can see that here:

We also talked about the remarkable hostility and even fear the Main Stream Media still has for Phyllis Schlafly. Last year, FX produced Mrs. America, a miniseries about the ERA fight that stars Cate Blanchett as Phyllis Schlafly. Needless to say, it doesn’t just contain bias, but outright lies. For example, it one episode, it simply invents an incident where Phyllis Schlafly just makes up a legal case during a debate.  In the real world, the situation was the exact opposite. Of course, when have facts ever restrained entertainers (or, for that matter, journalists?). You can see the facts behind the media’s lies at RealMrsAmerica.com.

Enjoy the interview and make sure to sign up for the VDARE Book Club for access to the full episode and all future ones. We’ll be doing at least one a month and there is a lot more on the way. You can also check out Phyllis Schlafly Eagles here and tune in to the Pro America Report here.