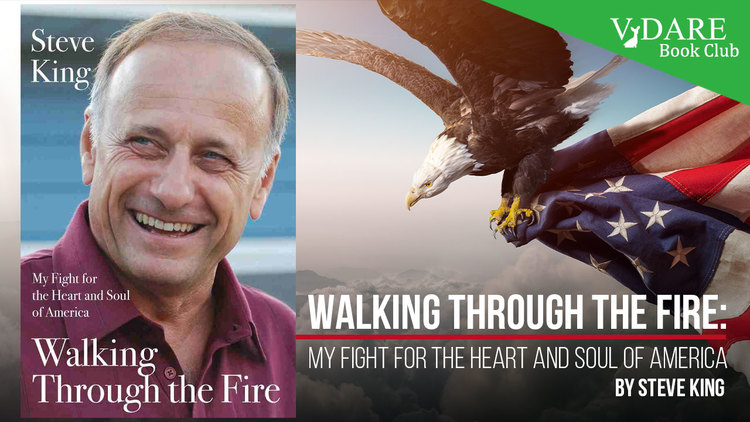 VDARE Book Club: Steve King's WALKING THROUGH THE FIRE: MY FIGHT FOR THE HEART AND SOUL OF AMERICA

This month's selection for the VDARE BOOK CLUB is Congressman Steve King's Walking Through the Fire: My Fight for the Heart and Soul of America. Rep. Steve King was one of America's greatest immigration patriots in Congress. He deserves a great deal of responsibility for the growing America First movement. He was betrayed by his own party and many so-called conservative activists, who worked in tandem with liberal journalists to have him purged.

One wonders if Steve King's most important actions are still ahead of him. To that end, we are looking forward to reviewing and analyzing this new work. His book takes on the liberal media, immigration, cowardly Republicans, and Never Trumpers. In the end, one begins to suspect that they are all functionally the same thing, driven by the same destructive, anti-American animus.

The discussion questions for the blook club will be published soon. This is obviously going to be an important topic as we see the conflict between immigration patriots and RINOs in the run-up to what the GOP expects to be very positive midterm elections. The outcome of that battle is something we all have a stake in. And Steve King is an important voice in that debate.

After all, if all Republicans acted like King, we would have far fewer problems.

I hope that you will join us.