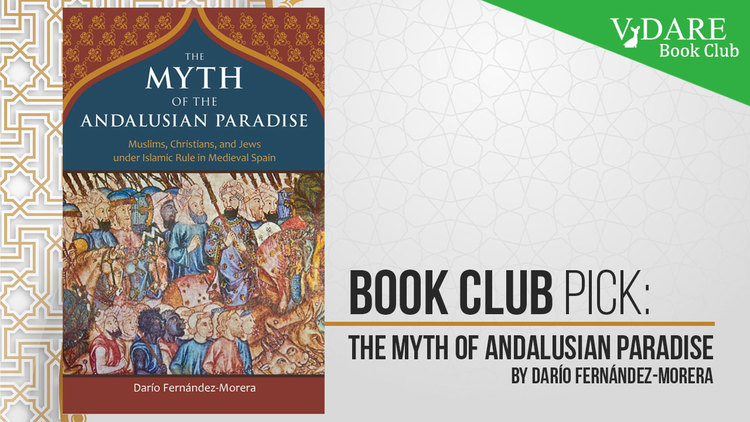 The February selection for VDARE Book Club is The Myth of the Andalusian Paradise: Muslims, Christians, and Jews Under Islamic Rule in Medieval Spain by Darío Fernández-Morera.

The myth that southern, Muslim-ruled Spain was a multicultural utopia presided over by wise, tolerant Muslims seems fundamental to the Leftist worldview. In my opinion, the myth is put to three political purposes.

1. Muslims found Spanish occupants no better than savages and brought civilization and learning to this area. Indeed, without Islamic scholars, the Western world would have lost contact with the classics, and thus have been denied an essential part of its culture. As Kwame Appiah put it, Muslims "made" Europe [How Muslims Made Europe, by Kwame Anthony Appiah, New York Review, November 6, 2008]. The West is nothing but the outgrowth of a superior culture, which survived by a freak of history and the militancy of its backwards, fanatical soldiers.

2. While Spain is traditionally viewed as a Catholic state, it should really be viewed as a multicultural state that was unjustly conquered by Catholic fanatics. The cure is to deconstruct Spain's identity and then create a new, more authentic multicultural "Spain" that belongs to everyone (except Spaniards) [The Spaniards rediscovering their nation's long-lost Islamic heritage, by Eoghan Macguire and Andrew Stewart, CNN, July 21, 2017]. The true Spain is not the Kingdom of Ferdinand and Isabella, but instead of the Moors. For this reason, opposing the replacement of the Spanish by Third World immigrants is illegitimate. After all, Spain is really theirs.

3. The Reconquista of Spain was not really a "reconquest" at all, but simply an act of religious fanaticism by white Christians. It stamped out a beacon of culture, sophistication and modernity that would have made the world a better place. Instead, we got the Catholic Spain that unleashed Christopher Columbus and spread Christianity in the New World, something that we should all feel was deeply immoral [Why Spain Was Long In Denial About Franco-And Still Stands By Columbus, by Jon Lee Anderson, New Yorker, November 2, 2021]. The Spanish must not only denounce Francisco Franco (and ban speech that may praise him or his regime) but indulge in German-style ethnomasochism about their entire history.

Those of us who want to defend the historic American nation, and Western Civilization as a whole, see the Andalusian fairy tale not just as cheap propaganda. It is nothing less than a libel against our people, civilization, and for most of us, our God. For that reason, the true history of this time in history must be carefully examined.

We will be announcing the podcast date soon and may have a special guest along with our host James Kirkpatrick. Book Club members will receive some selected excerpts and themes chosen by him so you'll be able to grasp the book's critical importance at a glance.

For those of you who are not Book Club members, now is a great time to sign up, as we have some exciting selections and guests in the coming months.