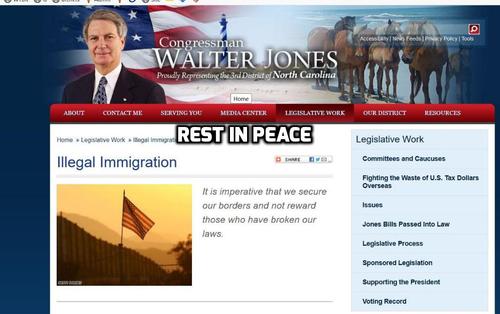 Walter Jones, R. I. P. : GOP Stalwart Should Be Remembered For Immigration Patriotism, As Well As War Stance

NumbersUSA gave Jones the rare True Reformer rating. You will see above that he would write to the families of military casualties, but in 2011, he also joined with Steve King in sponsoring a National Day of Remembrance for the victims of crimes committed by illegal aliens:

VDARE.com reports on Jones over the years show him always voting the right way on immigration issues. As a strong constitutionalist he was willing to consider impeachment, unlike most Congressmen.

In 2014, Peter Brimelow quoted a report that said:

As a result of that, he found himself primaried by the usual Republican suspects, see Can NeoCons, Slave Power Unseat Walter Jones, North Carolina's Best Immigration Patriot? by Patrick Cleburne, in May of 2014. The answer was no.

Jones's Congressional web page on illegal immigration [Archive link] says that he was a co-sponsor of the following bills in the 115th Congress:

H.R. 140 - Birthright Citizenship Act: This bill would end the process of birthright citizenship, which allows the children of illegal aliens born in the United States to become US citizens.

H.R. 1149 - Nuclear Family Priority Act: This bill would end “chain migration” by eliminating extended family categories that go far beyond the original immigrant and giving priority to the nuclear family in immigration requests. Chain migration is the process where seemingly endless “chains” of foreign nationals are allowed to immigrate to the United States, since our laws allow citizens and lawful permanent residents to bring in their non-nuclear, adult family members. It is the primary mechanism through which legal immigration in this country has quadrupled since the 1960s.

H.R. 2233 - American Jobs First Act: This bill would reform the often abused visa program and ensure Americans are not laid off only to be replaced by cheaper foreign labor.

He will be missed.