Was Arrest Resister And Taser Grabber Patrick Lyoya Driving A Stolen Car When He Was Stopped? Authorities Won't Say

My VDARE report above mentioned that Patrick Lyoya was a career auto thief, with three convictions already. (The criminal justice authorities let Lyoya plead out to misdemeanors in all three cases, and he never spent more than 181 days in jail. Thus did they magically “reduce” Grand Theft Auto, and turn a career felon into someone with no felony record.) 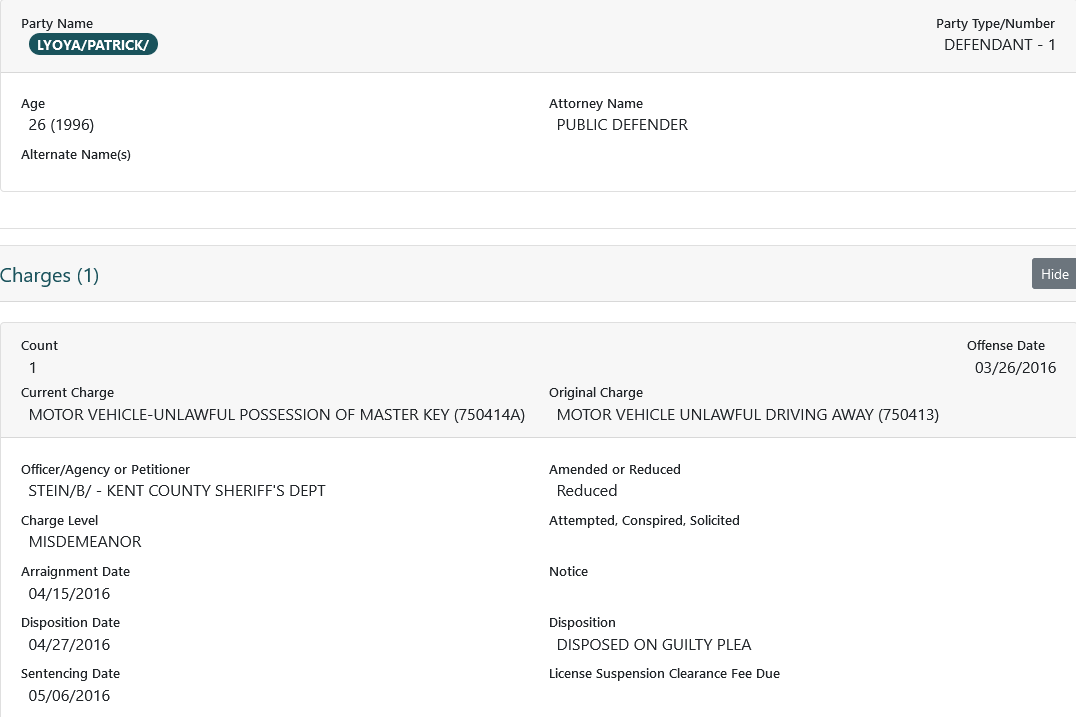 How many cars had Lyoya actually stolen? 300? 3,000? I used to frequently read that social scientists assumed for every time a career criminal gets arrested, he had gotten away with 99 other crimes. That was before academics gave up all pretense to scholarship and embraced the racial profiling myth. James Q. Wilson estimated that the ratio was 1,000: 1.

Following a computer crash, in which I lost all tabs related to the Lyoya Hoax, I sought in vain to find articles via Google about Lyoya’s career as an auto thief. Suspecting that I had falsely remembered the auto thefts (as opposed to Lyoya’s three convictions for DUI), I excised the references from my draft, which made Lyoya look much better.

I then switched to Duckduckgo, and immediately found articles on Lyoya’s car thefts. However, even at Duckduckgo such stories are now buried under irrelevant items, and I was only able to get a full accounting of Lyoya’s criminal record at a rare, pro-police media outlet: Authorities Won’t Say If Patrick Lyoya Was Driving A Stolen Car When He Was Stopped, by Holly Matkin, Police Tribune, April 20, 2022.

Authorities Won't Say If Patrick Lyoya Was Driving A Stolen Car When He Was Stopped - The Police Tribune https://t.co/2O8SEPNvC3

I became convinced that not only the mainstream media, but even Google, was conspiring to hide Lyoya’s criminal history, so as to help railroad yet another innocent white cop.

The Lyoya Hoax reminds me, unfortunately, of earlier cases in which the media and rogue prosecutors have sought to railroad innocent white policemen.

When Officer Michael Slager fatally shot Walter Scott in 2015, critics also said that Officer Slager should have permitted Scott to run away—some other officer would have arrested Scott down the line. At Officer Slager’s 2016 state trial, his white boss, Chief Eddie Driggers, testified that he didn’t want officers working for him who let criminals run away.

After Circuit Prosecutor Scarlett Wilson indicted Officer Slager for murder for killing Scott, I left at least four messages at her office, inquiring after the ownership status of the vehicle Scott was driving. Nobody ever responded.

Slager’s defense attorney in the state trial, Andy Savage, later told me that he had likewise left several messages at Prosecutor Wilson’s office, asking the same question, and also never got a response.

Finally, at Officer Slager’s state trial, Prosecutor Wilson called to the stand a black lady who testified that she had sold her car to Walter Scott.

I believe the lady perjured herself, at Prosecutor Wilson’s behest.

I believe that Circuit Prosecutor Scarlett Wilson conspired to suborn perjury, in order to help railroad Officer Michael Slager, in a malicious prosecution.

A lot of that goin’ around.

If Walter Scott had legally bought the car he was driving, he would have had the registration, not needed to lie to Officer Slager, and Prosecutor Wilson’s office would have answered my and Andy Savage’s queries, instead of waiting a year and a half to spring a surprise at trial. (Scott’s family claimed he had run because there was a warrant out on him for failure to pay thousands of dollars in child support. That may have also been a factor. Black petty criminals tend to collect warrants.)

Prosecutor Wilson needed a year and a half to get her lies straight.

As we shall see, racist, rogue prosecutors, and even the odd president, have been heading up conspiracies to railroad innocent whites via malicious prosecutions on behalf of black criminals for almost 40 years.