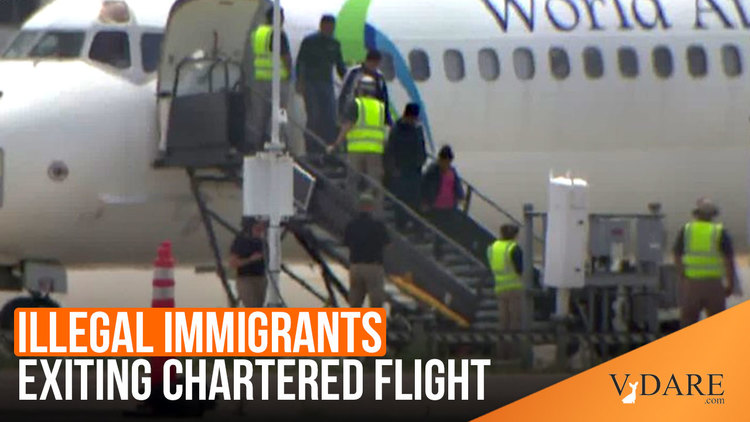 It's not that the Biden Administration can't accomplish things that it wants to. It's that the things it wants to accomplish are designed to make the country worse.

Planeloads of underage migrants are being flown secretly into suburban New York in an effort by President Biden’s administration to quietly resettle them across the region, The Post has learned.

The charter flights originate in Texas, where the ongoing border crisis has overwhelmed local immigration officials, and have been underway since at least August, according to sources familiar with the matter.

Last week, The Post saw two planes land at the Westchester County Airport, where most of the passengers who got off appeared to be children and teens, with a small portion appearing to be men in their 20s.

Westchester County cops stood by as the passengers — whose flights arrived at 10:49 p.m. Wednesday and 9:52 p.m. Friday — got off and piled into buses.

Some of them were later seen meeting up with relatives or sponsors in New Jersey, or being dropped off at a residential facility on Long Island.

White House Press Secretary Jen Psaki, when asked about why this was being done, snarked that the flights were just "early flights" and asserted that the government has a "legal responsibility to safely care for unaccompanied children until they... can be swiftly united with a parent or a vetted sponsor [Psaki jokes about secret migrant kids' flights: 'Earlier than you might like,' by Steven Nelson and Bruce Golding, New York Post, October 19, 2021].

Assuming this is true, why does this legal responsibility exist? It obviously creates a motivation for people to send children to El Norte, where they can eventually expect to receive amnesty or citizenship. Refugee resettlement groups that have a financial interest in this process continuing clearly won't put up any opposition. The American people might. The Biden Administration seems to tacitly acknowledge this by flying migrants in the dead of night, hoping that people won't notice.

When the Post noticed this, the Press Secretary reacted with snark, which was probably the right move. The rest of the press is showing little interest in the story. "Noticing," after all, is the problem.

What is not being made is any kind of a coherent argument about why the United States of America benefits from random Third Worlders being flown into the country. There's no argument why at a time when millions of Americans are suffering, this is a productive use of American resources. Indeed, at a time of rising crime, there's no argument why this is a productive use of law enforcement resources.

One would think that if there was a Republican who was seeking higher office, even out of sheer ambition, he or she might say something about this. We could start by removing the supposed "legal" requirement that the federal government play babysitter to the world.

Thus far, there seems to be silence.