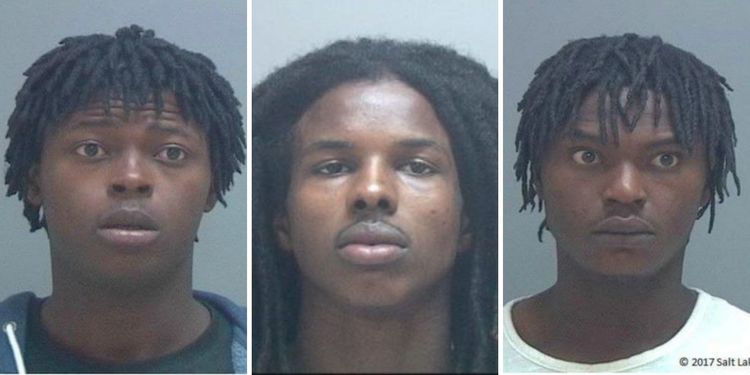 Three blacks, two of whom were presumably African immigrants, received four years probation instead of prison for gang raping a 14-year-old girl. U.S. Immigration and Customs Enforcement has the two in custody, where they hopefully will stay until deported.

“All three have been incarcerated since September of 2017,” KSL.com of Salt Lake City reported [3 men who raped or filmed 14-year-old sentenced to probation, by Emily Ashcraft, March 9, 2022]:

Richard Djassera, 26, of Murray; Dodjim Leclair, 29, of Murray; and Nasouh Albasis-Albasis, 24, of West Valley City, were each charged initially with two counts of aggravated sexual assault, a first-degree felony. Djassera was also charged with an additional four counts of sexual exploitation of a minor, a second-degree felony.

The report about the rape, which again, they committed in 2017, is sickening:

On Sept. 8, a 14-year-old girl slept over at a friend's house and then sneaked out of the house to meet up with the three men, police say. The men then took the girl to several parties while “drinking shots” with her, according to charging documents.

At some point, the girl — who was in and out of consciousness after drinking — was raped in the back seat of the men's car, according to West Jordan police.

Two of the men in the front seat of the car saw the third having sex with the girl in the back seat, so they “stopped the car and began to film the encounter,” the charges state.

Investigators found at least four videos of the alleged assault. In the videos, they observed the girl being sexually assaulted while she “appears to be incoherent and making weak attempts to stop the assault,” charging documents state.

When Albasis-Albasis was done assaulting the teen, Leclair then took his place, according to the charges.

“At no time in the video does (the girl) appear capable of giving consent, given her obvious level of impairment,” investigators wrote in the court documents.

Police said voices can also be heard on the recordings “encouraging the assault.”

Of course, the men aren’t “of” any of those places. They are, again presumably, “of” some savage place in Africa. That aside, we’re entitled to ask why almost five years elapsed between arrest and punishment. We’re also entitled to ask why prosecutors said, as KSL.com put it, they found “no evidence in this case of any force or coercion.” The girl was not just a little tipsy. She was “in and out of consciousness.” A rational person would say that sex with any such person, much less a 14-year-old, is self-evidently force and coercion. The age of consent in Utah is 18.

Released from jail, “Djassera and Leclair will be under the custody of U.S. Immigration and Customs Enforcement to address their immigration statuses.”

Don’t believe for a second their “statuses” will soon be “deported.” Remember who runs the Homeland Security Department. Alejandro Mayorkas, an unindicted visa fraudster who brags about not enforcing immigration law, might just declare them “essential workers” and let them stay here to intoxicate and rape another 14-year-old.

The station did not report anything about the third rapist’s immigration status. Possibly he's a naturalized American citizen, and thus undeportable.

Because of rape shield laws, we know nothing about the victim, although one might suspect she’s a white girl. Both the MSM and the police know her race and could report it without identifying her—West Jordan is 72 percent white. They simply refuse to tell us.

Of course, if the three rapists were white and the victim black, those facts would appear in the story’s headline.