Where Did The Etruscans Come From? 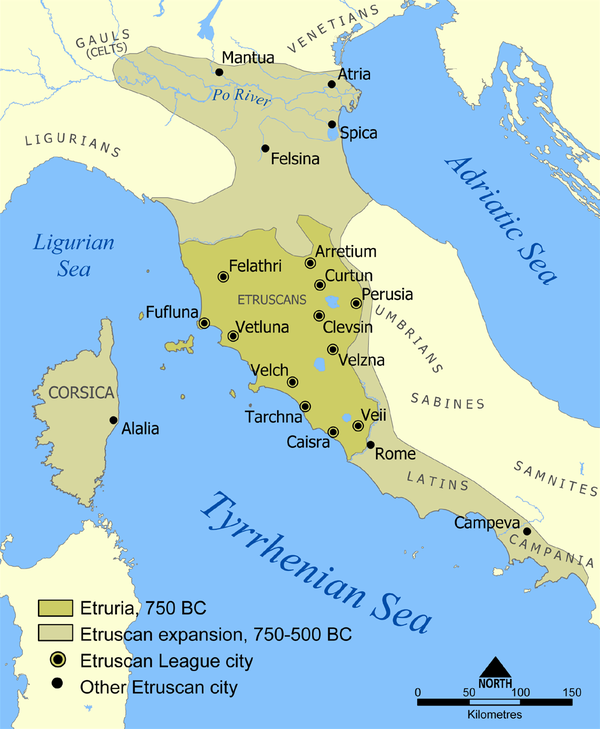 Italy’s region of Etruria (including Tuscany, of which Florence is the capital) has been a center of fine art and culture going back to the Etruscans more than 2500 years ago.

Unlike the Indo-European-speaking Latins of neighboring Rome, the Estruscans apparently spoke a pre–Indo-European invasion language (perhaps like the modern Basques).

Whether the Etruscans arose in the first century BC wholly indigenously in central Italy or arose more from a colony of Anatolia (modern Turkey) was disputed by ancient Greek historians, with Herodotus holding for an Anatolian origin and Dionysius of Halicarnassus supporting indigenous development in Italy.

If you go back far enough, sure, much of the ancestry would have come from the expansion of Fertile Crescent farmers into Europe, but this question concerns a later period, when agriculture was generally common around the Mediterranean: e.g., perhaps after the Trojan War of about 3200 years ago.

A new study in Science Advances reports on the DNA of 82 Etrurian skeletons from 800 BC to 800 AD.

Of the 48 people from BC, 40 were standard Central-West Mediterranean Europeans (with ancestors going back to western hunter-gatherers, Middle Eastern farmers, and steppe conquerors), 4 were North African, 3 were Central European, and 1 was Near Eastern. So not a lot of support for the Anatolian colony idea of Herodotus.

On the other hand, about half of the ancestry of skeletons from the Roman Empire era stems from Anatolia and the Levant. As in Rome, there was a huge influx of Eastern Mediterranean slaves, merchants, etc. But that apparently tended to diminish after the fall of the Roman Empire, as local farmers’ lineages were more likely than cosmopolitan urbanites.

Then in the Dark Ages, skeletons show a lot of northern and eastern European ancestry (i.e., German barbarian invaders who toppled the Roman Empire).

After 1000 AD, there hasn’t been much change in the genetic ancestry of central Italians.

These days, we are constantly lectured on the cultural advantages of constantly surging populations of migrants from distant lands. Yet, by 1500 AD, the local yokels had launched the Renaissance.

Abstract
The origin, development, and legacy of the enigmatic Etruscan civilization from the central region of the Italian peninsula known as Etruria have been debated for centuries. Here we report a genomic time transect of 82 individuals spanning almost two millennia (800 BCE to 1000 CE) across Etruria and southern Italy. During the Iron Age, we detect a component of Indo-European–associated steppe ancestry and the lack of recent Anatolian-related admixture among the putative non–Indo-European–speaking Etruscans. Despite comprising diverse individuals of central European, northern African, and Near Eastern ancestry, the local gene pool is largely maintained across the first millennium BCE. This drastically changes during the Roman Imperial period where we report an abrupt population-wide shift to ~50% admixture with eastern Mediterranean ancestry. Last, we identify northern European components appearing in central Italy during the Early Middle Ages, which thus formed the genetic landscape of present-day Italian populations.