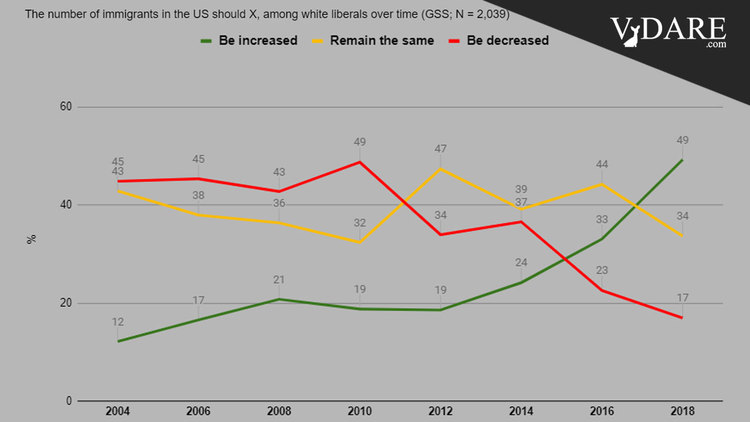 Okay, the left has shifted drastically from moderate immigration restrictionism to something approaching open borders in the span of less than two decades, but the country’s demographics have changed over that time, too. Immigration begets support for more immigration, and immigrants to America tend to be on the political left:

What other trend happened during that time?

These sorts of charts are next-to-useless without separating out race.

Fair enough, there is a lot of utility in that as a general principle. And it applies in this case, too, but not in the way many would expect. The seismic shift in views on immigration have predominantly been driven by whites, especially white liberals: Compare this to people of color: And even to liberal people of color: In 2018, the latest iteration of the General Social Survey to have been released as of this posting, half of white liberals want immigration increased, compared to less than one-third of liberal POCs. White leftists are more supportive of open immigration than even non-white leftists are.

Parenthetically, if we read the survey question carefully (and literally—which almost no one who participated in the survey likely did), it inquires about the number of immigrants in the country, not the rate of immigration into the country. So achieving a “remain the same” response would require something close to a moratorium on future immigration and “be decreased” would require deportation. As of 2018, then, people of color net out at the goldilocks position. The number of immigrants in the country is just right and should neither be increased nor decreased! The number of times the corporate media will present this reality to the public is precisely zero, of course.