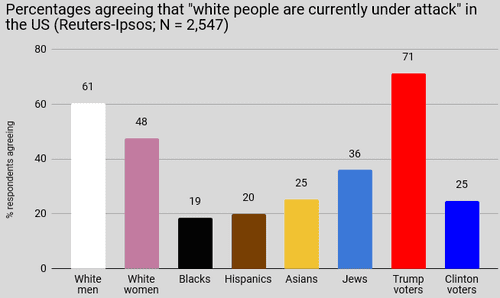 Whitey Under Siege? A Majority Of Pale Males Thinks So!

A majority of pale males thinks so:

The respondent pool is relatively modest by Reuters-Ipsos standards. The Jewish sample is only 52 and consequently should be considered no more than directionally suggestive.

One-in-five blacks and Hispanics perceive whites as being under attack. What percentage of this contingent thinks it a good thing that this is so? The POC ascendancy may have its white allies, but we have vanishingly few non-white allies. The few who do exist tend to be, on account of their mythic rarity, quite salient.

As the Trump presidency stalls out, let us not forget how effective his perpetual focus on fairness has been in persuading those on the fence to come over to his side. Channelling Jonathan Haidt, fairness is a moral dimension white liberals put enormous emphasis on. Pointing out what the empirical data says about group differences will only ever appeal to a small fraction of people. For most, the potential for persuasion exists in the realm of morality rather than of ratiocination.

Accusing those who wrap themselves up in the rhetoric of Diversity! of being the real racists is not only humiliating, it’s futile. It is to give the game away on the opening whistle. DR3 can work, but the racism being objected to must be of that against whites by our abyssal persecutors, not against non-whites by those long dead now. Everything should be framed as an affront to the innocuous observation that it is, indeed, okay to be white.