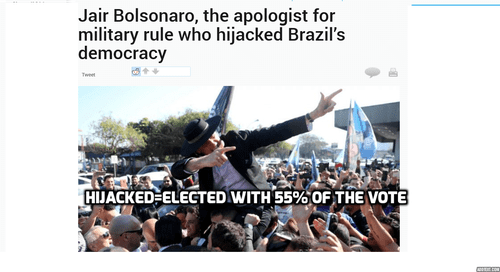 Why Brazil Had A Dictatorship In The 60s: The Real Threat Of Communism—And Possible Nuclear War 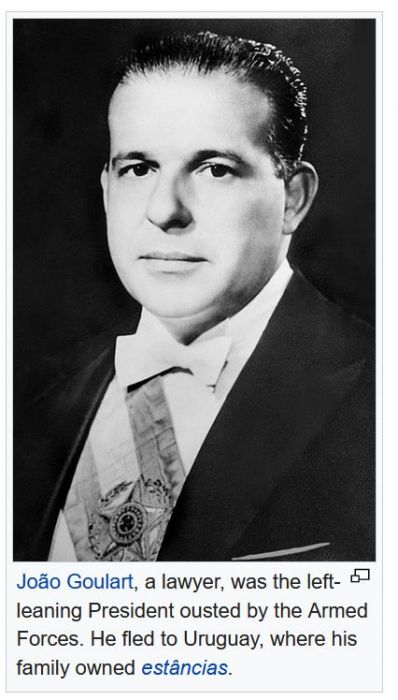 In Lance Welton’s recent story about Brazil's new President Jair Bolsonaro, Welton mentioned that Brazil was under a military dictatorship for 21 years (1964-85) and that a recent female president (Dilma Rousseff, now impeached for budgetary malfeasances) had been tortured by said dictatorship.

This semi-ancient history comes up because Bolsonaro is accused of not hating said dictatorship as much as the New York Times does, based partly on things Bolsonaro said 25 years ago.[Jair Bolsonaro; A Soldier Turned Politician Wants To Give Brazil Back to Army Rule,  By James Brooke, NYT, July 25, 1993]

My question was, why did the Brazilian Armed Forces think the country needed a military dictatorship at the time?

Here’s the history, via Wikipedia.

Warning! It's mostly about people you never heard of:

After the Presidency of Juscelino Kubitschek, the right wing opposition elected Jânio Quadros, who based his electoral campaign on criticizing Kubitschek and government corruption. Quadros' campaign symbol was a broom, with which the president would "sweep away the corruption." In his brief tenure as president, Quadros made moves to resume relations with some communist countries, made some controversial laws and law proposals, but without legislative support, he couldn't follow his agenda.

In the last days of August 1961, Quadros tried to break the impasse by resigning from the presidency, apparently with the intention of being reinstated by popular demand. The Vice-president, João Goulart, member of PTB [I. E. Brazilian Labour Party, Communism-lite] and active in politics since Vargas Era, at that time was outside the country visiting China.

That would be Communist China, at the time more or less an international pariah, ally of the Soviet Union.

At that time Brazil's President and Vice President were elected from different party tickets. Some military top brass tried to prevent Goulart from assuming the Presidency, accusing him of being communist, but the legalist campaign in support of Goulart was already strong. The crisis was solved by the "parliamentarian solution"—arrangement that decreased his powers as President by creating a new post of Prime Minister which was filled by Tancredo Neves and instituting a Parliamentary republic.

Brazil returned to Presidential government in 1963 after a referendum, and, as Goulart's powers grew, it became evident that he would seek to implement "base reforms" (bottom-up reforms) such as land reform and nationalization of enterprises in various economic sectors (which would remove the nation from its antique latifundial economy, but that were considered communist reforms), regardless of assent from established institutions such as Congress (Goulart had low parliamentarian support, due to the fact that his centrist attempts to win support from both sides of the spectrum gradually came to alienate both.) 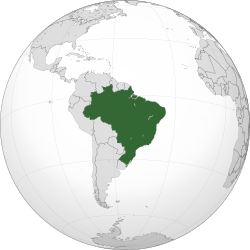 Emphases added, various useless  Wikipedia links removed. (See the original here.) Even though the anonymous author is fairly sympathetic to Goulart, it's pretty obvious that if they didn't have military dictatorship, they would have had a non-military dictatorship, with Goulart taking over the economy without the consent of the legislature, and possibly with the support of one or more of the two Communist Evil Empires, Russia and China.

Now, I can hear left-leaning Americans asking "Would that really be so bad?" And the answer, aside from the horrors of socialism, is that yes, it would be bad if led to global thermonuclear war!

Remember the Cuban Missile Crisis of 1962 that almost did just that? You can be sure the Brazilian Army was thinking about that in 1963. Think what it would mean, during the Cold War, if a country the size of Brazil had gone Communist, with a base in Rio for the Russian Navy. That's the reason Bolsonaro and other Brazilians don't necessarily hate the dictatorship.

That doesn't mean that the military rulers weren't bad people, with their torture and so on. The fact that South American governments behave like that is one reason immigration from South America is a bad thing.

You don't get only the victims of torture as refugees, you get the torturers, frequently calling themselves "refugees". (Michelle Malkin’s book Invasion has a chapter called "The Torturers Next Door".) And even the victims aren't necessarily good guys.

For example, I wondered why Dilma Rousseff was in prison in the 70s, when she was tortured. Answer: she was a terrorist.

No, that doesn't justify torturing her—I repeat that torture is a South American habit we in North America don't want imported—but compare the enthusiasm in the press for ex-terrorist President Rouseff with their shock and horror at the idea of electing an ex-paratrooper who served in his own country's Armed Forces.

The problem here is that most people today have forgotten that there ever was a Cold War, or an Evil Empire, the only exceptions in the media being some elderly Leftists who were on the losing side.