Why Can't We Have GOP Women Congresscritters Like MK Ayelet Shaked? 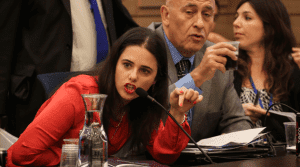 Shaked, 38, is the young, secular face of the Jewish Home, known in Hebrew as HaBayit HaYehudi, the far-right Orthodox nationalist group. Currently the fifth-largest faction in the Israeli Knesset, Jewish Home is poised to make a major showing in Israel’s March elections. Shaked, first elected to the Knesset in 2013, has been an integral part of the Jewish Home’s project to bring secular and non-Orthodox voters — whom Israelis call “traditional” — into pro-settler politics. At the heart of the Jewish Home’s platform is its plan to impose a non-state solution on the Palestinians, which would involve partial annexation of the occupied West Bank

In a group that makes no attempt to hide its disdain for both the Israeli left and the Palestinian national movement, Shaked has established herself as the party polemicist. On June 30, the day that the bodies of three yeshiva boys kidnapped and killed by Palestinians were located in the West Bank… Shaked posted an article on her Facebook page calling the Palestinian people “the enemy.”… It was translated into English by the anti-Zionist web site Electronic Intifada — which deemed it a “call for genocide”— and soon went viral with a high-profile pickup in the Daily Beast.

(Electronic Intifada’s article is Israeli lawmaker’s call for genocide of Palestinians gets thousands of Facebook likes.)

Furthermore she understands the strategic implication of mass alien immigration, and has taken action:

Shaked has called the 50,000 Eritrean and Sudanese asylum seekers in Israel … a threat to the Jewish character of the state… “It’s totally a lie that they are running from genocide,”

One recent Shaked initiative…was a Basic Law amendment that would allow the Knesset to overturn a High Court of Justice ruling to cancel a law. The proposal was a direct response to the High Court’s order to shutter Holot, a facility for African migrants in the Negev. Shaked said there are two options for the migrants: either leave Israel or stay in Holot.

VDARE.com of course has long admired the intelligent determination with which Israel has met her illegal immigrant problem – appropriate fencing, vigorous deportations, and remittance interdiction.

The question is, why does not the GOP produce brave and enterprising patriotic women Representatives like this? Or a Thatcher? Remember not one voted against Boehner. Instead we have Playboy Bunnies like Jodi Ernst and even worse specimens like Renee Ellmers. (Honorable somewhat exception: Michelle Bachmann)

Partly the reason of course is the effortless double standards of big GOP donors like Sheldon “Put A Big Fence Around Our Country” Adelson and the bribery they have embarked upon.

But in the end, could it be we are not of the stuff of which the Founding Fathers (or the Zionists) were made? 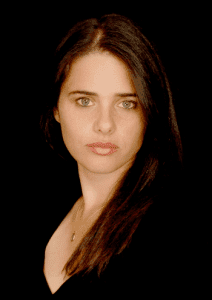