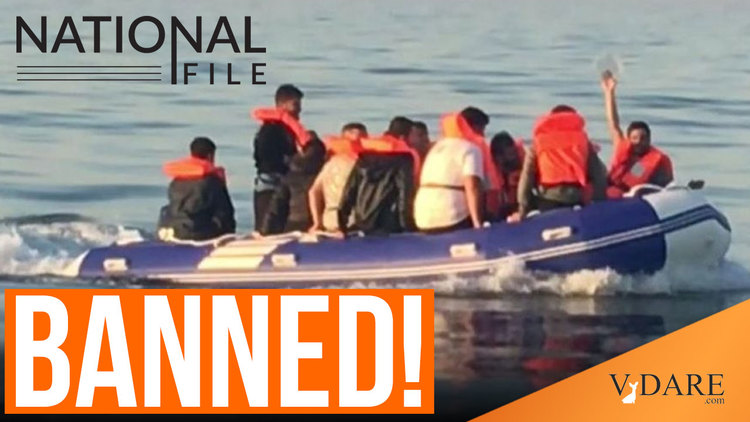 England is not that far from France in places, and it's even possible to swim the English Channel. The only reason England hasn't been successfully invaded since 1066 is the Royal Navy standing in the way. But now Arabs and Africans are coming over in small boats, and British coast guards, instead of turning them back, are "rescuing" them...and bringing them into the port of Dover.

There are only 20 miles between Great Britain and France across the English Channel, and the journey over the waves is one that many invaders have taken throughout the years, from the Romans, to the Saxons, to the Normans. Great generals have looked across the waters from the European continent to the island nation, but not in a millennium have any of them managed to conquer the land that lies beyond the sea.

Now, Dover has become the landing point for a new type of invasion. Illegal immigrants are flooding across the English Channel, assisted by the governments of France and Britain. After landing, the migrants are greeted by a scene that Napoleon and Hitler could only dream of seeing: the White Cliffs of Dover.

That's part of the introduction to NationalFile.com's major documentary on the situation which would get a lot of views on YouTube if their channel hadn't suddenly been banned.

The message from YouTube received by National File on Thursday read, “Hi National File. We have reviewed your content and found severe or repeated violations of our Community Guidelines. Because of this, we have removed your channel from YouTube.”

“Thankfully, Big Tech no longer has a monopoly over information,” Pappert said. “There are new platforms that are better than YouTube in every way, ranging from Gab TV, to Banned.Video, to Rumble. When YouTube resorts to acts of blatant censorship, it only takes away their market share. Maybe the globalists at Alphabet Inc. don’t care about money anymore?”

Pappert concluded, “The most disgraceful part of this ban is that their excuse was ‘spam’. We are a news publication, and the videos that appeared to upset YouTube the most are episodes of National File TV, a commentary program. YouTube clearly wanted to get rid of us, and they wanted to do it before this documentary could be released, so they picked a reason – any reason – and went with it. Very embarrassing behavior from the big tech giant.”

BREAKING: YouTube Bans National File Day Before Immigration Documentary Release
"The fact that YouTube would ban us the day before we release our first documentary, especially when its subject is the global migrant crisis championed by globalists, is quite frankly comical."
By Gabriel Keane, July 15, 2021

Fortunately, as noted above, there are other formats that can be used—list here: nationalfile.com/destination-dover

In a groundbreaking documentary, National File's @JackHadders exposes the massive, unseen migrant crisis happening in the United Kingdom, which closely mirrors what is happening at the southern border.https://t.co/wEnUmK6CvP

I'll embed this version, which is not on the banned account, but on the personal account of one of the filmmakers:

If that doesn't work, it's also on Gab, on BannedVideo, and on Rumble. The Tech Totalitarians can be beaten.

VDARE.com was banned from YouTube in August, 2020—see Leftist enforcer Jared Holt gloating about it here.

We have a BitChute channel here.