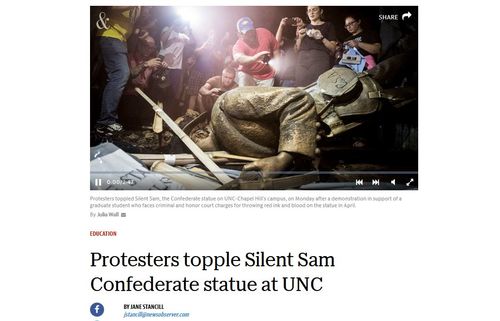 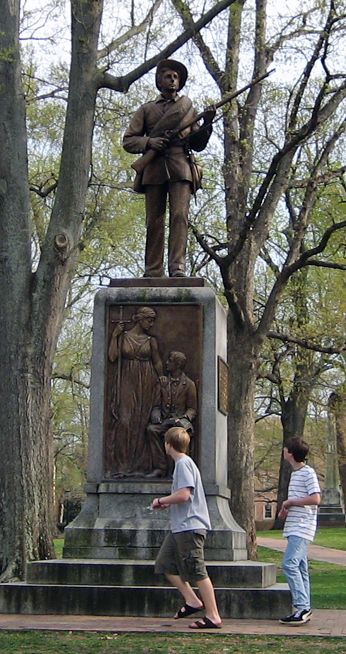 Another day, another monument torn down by a violent mob, another case of police simply standing by. The iconic “Silent Sam” statue was torn down at the University of North Carolina Chapel Hill this week. One of the more incredible sights was the police in the midst of the crowd, overlooking the affair but doing nothing to stop it. Needless to say, professors were in the midst of the crowd urging it on. There were also antifa with the red bandanas of the group Redneck Revolt, which specializes in armed protests.

Needless to say, there was some mild tut-tutting from campus administrators but no action. And it’s not clear what the police were actually doing.

The protesters quickly took control of the area immediately around the statue, hoisting four tall banners in a square that almost completely obscured it. The head of the Confederate soldier occasionally poked out from the top of the banners.

Police formed a perimeter around protesters. One banner said, “The whole world is watching. Which side are you on?” Some of the demonstrators wore Carolina blue bandannas over their faces that said, “Sam must fall.”

Several bystanders wearing Confederate flags on T-shirts watched the protest. Clint Procell, 31, wore a Trump hat. A self-described conservative, Procell said he wanted to see for himself how intolerant the people protesting Silent Sam were, and the experience didn’t disappoint. He said he was pushed and his hat was temporarily stolen.

It takes some doing to knock down a statue. If the police can’t even prevent that, well, what are they for?

Supposedly this was to protest “institutional white supremacy.” I hesitate to add that this wouldn’t have happened were it not for the affirmative action students and the Gender Studies professors and all the other elements of the multicultural establishment. Still, UNC, when it was founded at least, was a Southern school and it has traces of still being something like a Western educational institution. Not for much longer, of course.

Let’s say for the sake of argument though that UNC is still too conservative, still too dominated by North Carolina’s past. Then why go there if that hurts you so much? Would UNC be a college worth going to without the so-called “institutional white supremacy,” i.e. without history, tradition, standards, infrastructure, resources, oh, and by the way, an endowment of about 3.9 billion dollars? For all the talk of white supremacy, non-whites sure are eager to immigrate to white racist countries, go to institutionally racist schools, and live in racist white neighborhoods. For that matter, so are all the anti-racists who make a profitable living talking about how racist and evil white people are. It’s not like there aren’t alternatives, guys! You don’t want us to think you are hypocrites, do you?

For all those North Carolinians and UNC alumni—the college that you love hates your guts. It spits upon your traditions. It hates your history. So why are you supporting it? Defend the institutions that defend you. Otherwise, you are subsidizing your own dispossession. And Silent Sam is just the beginning. They are coming for everything, and they will take it—that is, as long as they have you to pay for it.

Heck, if you really want to donate to something, send it to us! We’ll at least use it to fight for your interests. And I guarantee people learn more real history from VDARE.com than they do from a modern university.