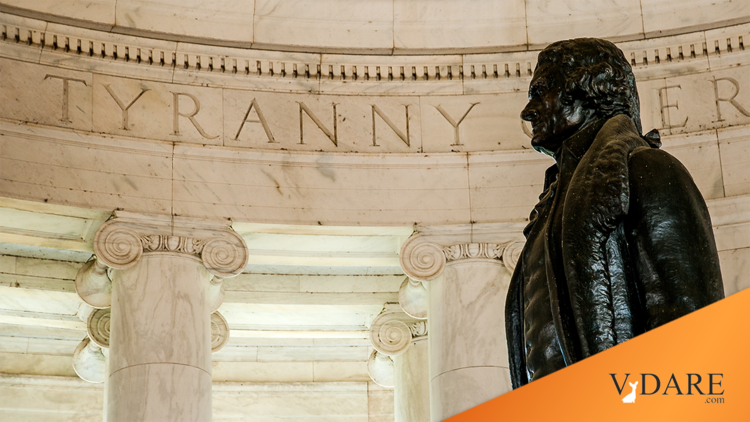 The Declaration of Independence—whose proclamation, on July 4, 1776, we have just celebrated—has been mocked out of meaning.

To be fair to the liberal Establishment, ordinary Americans are not entirely blameless. For most, Independence Day means firecrackers and cookouts. The Declaration doesn't feature. In fact, contemporary Americans are less likely to read it now that it is easily available on the Internet, than when it relied on horseback riders for its distribution.

Back in 1776, gallopers carried the Declaration through the country. Printer John Dunlap had worked "through the night" to set the full text on "a handsome folio sheet," recounts historian David Hackett Fischer in  Liberty And Freedom. And President (of the Continental Congress) John Hancock urged  that the "people be universally informed."

Thomas Jefferson, the author of the Declaration, called it "an expression of the American Mind." An examination of Jefferson's constitutional thought makes plain that he would no longer consider the mind of a McCain, an Obama, or the collective mentality of the liberal establishment, "American" in any meaningful way. For the Jeffersonian mind was that of an avowed Whig—an American Whig whose roots were in the English Whig political philosophy of the seventeenth and eighteenth centuries.

By "all men are created equal," Jefferson, who also wrote in praise of a "Natural Aristocracy," did not imply that all men were similarly endowed. Or that they were entitled to healthcare, education, amnesty, and a decent wage, à la Obama.

Rather, Jefferson was affirming the natural right of "all men" to be secure in their enjoyment of their "life, liberty and possessions."

This is the very philosophy Hillary Clinton explicitly disavowed during one of the mindless presidential debates of 2007. Asked by a YouTubester to define "liberal", Hillary revealed she knew full-well that the word originally denoted the classical liberalism of the eighteenth and early nineteenth centuries. But she then settled on "progressive" as the appropriate label for her Fabian socialist plank.

, colonial Americans were steeped in the writings of English Whigs—John Locke, Sidney Algernon, Paul Rapin, Thomas Gordon and others. The essence of this "pattern of ideas and attitudes," almost completely lost today, was a view of government as an inherent threat to liberty and the necessity for eternal vigilance.

Jefferson, in particular, was adamant about the imperative "to be watchful of those in power," a watchfulness another Whig philosopher explained thus: "Considering what sort of Creature Man is, it is scarce possible to put him under too many Restraints, when he is possessed of great Power."

"As Jefferson saw it," expounds Mayer, "the Whig, zealously guarding liberty, was suspicious of the use of government power," and assumed "not only that government power was inherently dangerous to individual liberty but also that, as Jefferson put it, 'the natural progress of things is for liberty to yield and government to gain ground.'"

For this reason, the philosophy of government that Jefferson articulated in the Declaration radically shifted sovereignty from parliament to the people.

But Jefferson's muse for the "American Mind" is even older.

The Whig tradition is undeniably Anglo-Saxon. Our founding fathers' political philosophy originated with their Saxon forefathers, and the ancient rights guaranteed by the Saxon constitution. With the Declaration, Jefferson told Henry Lee in 1825, he was also protesting England's violation of her own ancient tradition of natural rights. As Jefferson saw it, the Colonies were upholding a tradition the Crown had abrogated.

Philosophical purist that he was, moreover, Jefferson considered the Norman Conquest to have tainted this English tradition with the taint of feudalism. "To the Whig historian," writes Mayer, "the whole of English constitutional history since the Conquest was the story of a perpetual claim kept up by the English nation for a restoration of Saxon laws and the ancient rights guaranteed by those laws."

If Jefferson begrudged the Normans' malign influence on the natural law he cherished, imagine how he'd view our contemporary cultural conquistadors from the South, whose customs preclude natural rights and natural reason!

Naturally, Jefferson never entertained the folly that he was of immigrant stock. He considered the English settlers of America courageous conquerors, much like his Saxon forebears, to whom he compared them. To Jefferson, early Americans were the contemporary carriers of the Anglo-Saxon project.

The settlers spilt their own blood "in acquiring lands for their settlement," he wrote with pride in A Summary View of the Rights of British America. "For themselves they fought, for themselves they conquered, and for themselves alone they have right to hold." Thus they were "entitled to govern those lands and themselves."

Thus, for the edification of libertarians prone to vulgar individualism, the Declaration of Independence is at once a statement of individual and national sovereignty.

And. notwithstanding the claims of the multicultural noise machine, the Declaration was as monocultural as its author.

Let us, then, toast Thomas Jefferson—and the Anglo-Saxon tradition that sired and inspired him.

Ilana Mercer (email her) is a weekly columnist for WorldNetDaily.com, a fellow at the Jerusalem Institute for Market Studies,. and the author of Broad Sides: One Woman's Clash With a Corrupt Culture

, the Foreword to which was written by Peter Brimelow. Her website is www.ilanamercer.com; her blog www.barelyablog.com