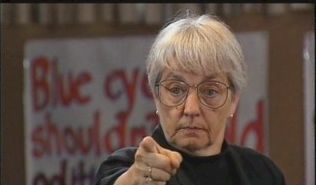 VDARE.COM has covered Jane Elliott before, and we get a lot of email about her. She's the "diversity consultant" who told  a Department of Education seminar that George W. and his brother Jeb were racists. She used the occasion of a speech on "how children become prejudiced" to urge the assembled educrats to vote against Republicans in the 2000 election.

That's normal civil service corruption, where the Left uses its dominant position in education to advance a Democratic agenda.

But Jane Elliott's views are stranger than you think.

Her career as a diversity expert began when she was a schoolteacher in Iowa, over thirty years ago. After Martin Luther King was shot, she did a thought control experiment on her grade school students, who she describes as "all-white Christian third-graders" dividing them into "blue-eyed" and "brown-eyed" groups, and treating the blue-eyed group as second-class citizens. (She was able to continue this experiment in Riceville, Iowa for 14 years, in spite of strong protests.)

"In Blue Eyed, we join a diverse group of 40 employees from the Midwest - blacks, Hispanics, whites, women, and men. The blue-eyed members participate in an exercise that involves a pseudo-scientific explanation of their inferiority, culturally biased IQ tests, and blatant disrespect. In just a few hours under Elliott's withering regime, we see grown professionals become despondent and distracted, stumbling over the simplest commands. Black members of the group forcefully remind whites that they undergo similar stresses, not just for a few hours in a controlled experiment, but every day of their lives. And Elliott points out that sexism, homophobia, and ageism are just as damaging."

This is part of generalized brainwashing program by which white people are supposed to feel guilty about what their ancestors did, and to believe that any difference between the average performance, average income, or average crime rates between ethnic groups is a result of cultural bias.

For example, her trick of giving "culturally biased" tests to the blue-eyed victims must mean giving different tests to the different groups. Anti-testing groups object to the fact that blacks can't pass the same tests as whites (on average, that is), but they blame the test.

In an the interview she gave in Australia, which I quoted above, she railed at the concept of education itself, to the extent that it teaches what we like to think of as Western Civilization.

"We do that by teaching a white curriculum. And we do it by teaching that power lies in acting white. It's easier for the Asian kids to be accepted as close to white than it is for Lebanese at first. So you establish a hierarchy. The teacher establishes a hierarchy...."

Elliott maintains an explicit double standard in her description of racism. In an interview with Horizon magazine, she says:

"Sometimes racism exists in an assumption (a store clerk who closely tracks the movements of a young Black customer but not a White one); a behavior (a teacher who refuses to acknowledge the accomplishments of a Black student with the same pride as those of a White); or an attitude (a White woman who tenses when a Black man steps into an elevator)."

Hmm. But every day of her life, Jane Elliott is following white people around telling them that they're racist. She markets her videos telling whites that their society is incurably racist; their insistence on standards is a desire to ruin people's lives. She seems to be "profiling" store detectives—and frightened women in elevators.

Could any of those store detectives, women in elevators, and other suspicious people be right in their suspicions? Nathan McCall, formerly of the Washington Post, and now of Emory University in Atlanta [nmccall@emory.edu], wrote an essay about feeling that he was under suspicion during an elevator ride. 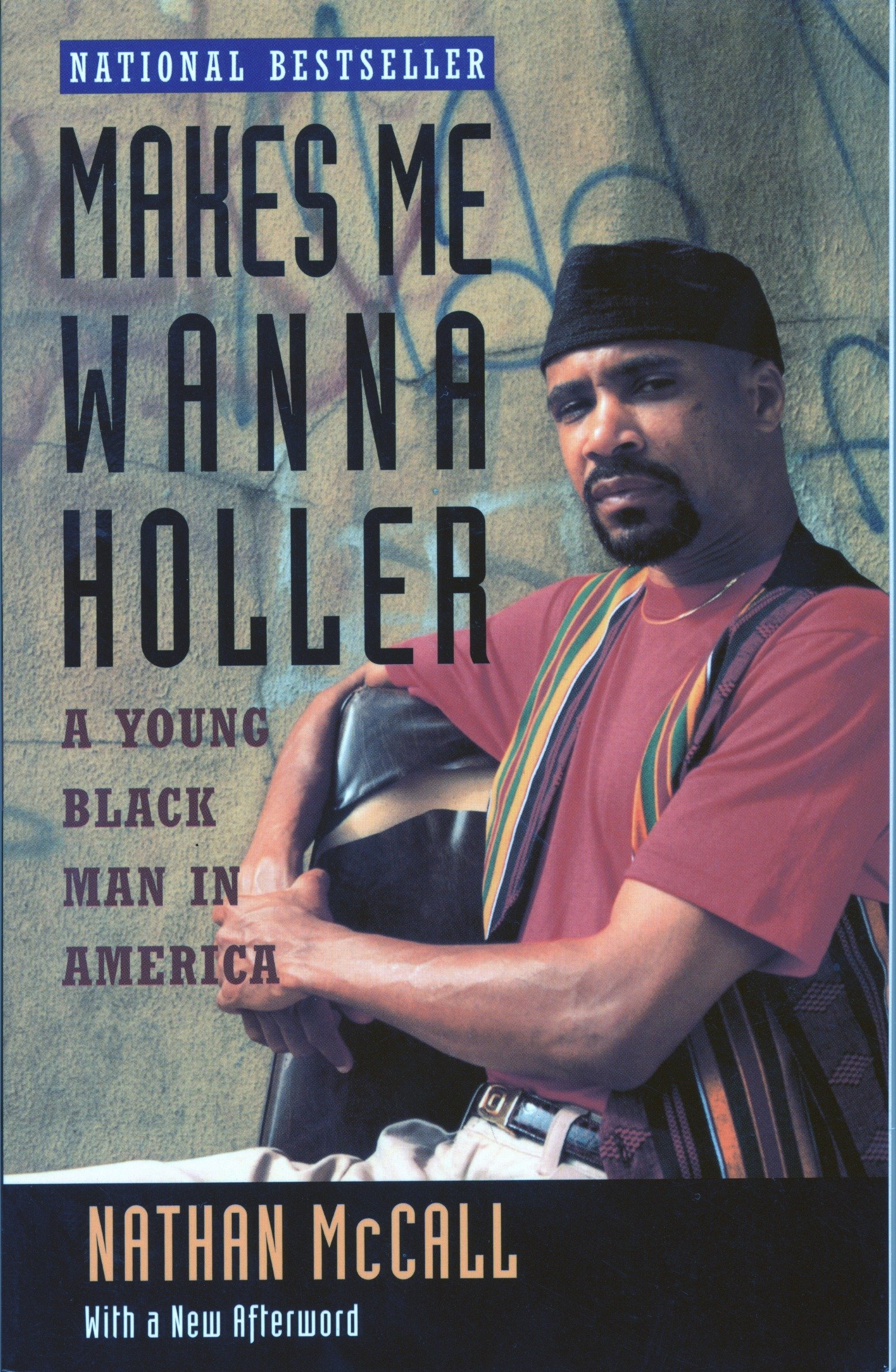 I have a copy of Nathan McCall's book Makes Me Wanna Holler, and it may be worth a column some day (possible headline: Makes Me Wanna Puke), but in the meantime, this quote from Michael Sierra's  Flummery Digest, written in 1997 will do. Sierra writes:

From "The Elevator Ride," by Nathan McCall, part of his new book of personal essays, What's Going On. Writing in the second person, McCall describes an encounter in an elevator between a black man—-presumably himself—-and a white woman who suffers from fear and "racial suspicion":

She suspects what you want.... She seems filled with the wildly absurd terror that, in the brief ride between the 12th and 1st floors, this black man may rape her, rob her, and leave her for dead.... Can't she tell from your bearing that you're no rapist or thief?

On the first page of his previously published memoir, Makes Me Wanna Holler: A Young Black Man in America, McCall describes another of his racial encounters:

We all took off after him... Stomped him and kicked him... kicked him in the head and face and watched the blood gush from his mouth... kicked him in the stomach and nuts, where I knew it would hurt.... Every time I drove my foot into his balls, I felt better.... We bloodied him so badly.... We walked away, laughing, boasting.... F—-ing up white boys like that made us feel good inside.

In addition to its displays of McCall's unreconstructed racism, the book also contains candid descriptions of his participation in numerous felonies: assault and battery, breaking and entering, assault with a deadly weapon, armed robbery, rape, and attempted murder. McCall spent very little time in prison for these crimes, but instead went to a state university, then on to a career in journalism that eventually landed him on the Metro desk of the Washington Post. It's quite possible the nervous woman in the elevator simply read McCall's book and recognized his face from the cover.

Who's right, Jane Elliott or Michael Sierra? We report, you decide.