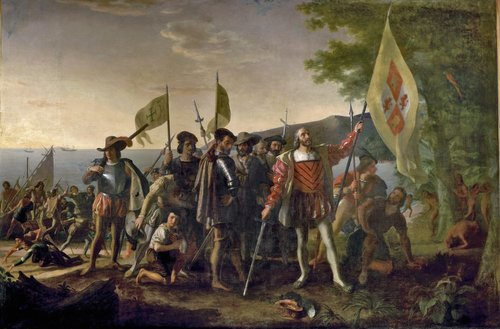 Abolishing America (contd.): Thoughts On the Guilt Lobby On The Anniversary Of Columbus` Discovery

[VDARE note: Award-winning science fiction novelist and arch-libertarian L. Neil Smith says he is the libertarian movement's "most prolific and widely-published living writer."It may be true. You can buy copies of his books in stores or online from his website. His latest, The American Zone, soon to be published by Tor, is unfortunately prescient: it involves a terrorist attack on a mile-high building.

In honor of Christopher Columbus, who Eurocentrically "discovered" America on this day in 1492, we run Smith's thoughts on the racial guilt lobby. Of course, it also shows how tolerant we are because Smith says he's in favor of open immigration –but hedged about with crippling conditions. We don't agree anyway, but it's just a phase some thinking libertarians go through.

Note Smith can definitely say "I told you so" on one point: long before September 11th, he was calling for Americans to be allowed to carry guns on planes. ]

My nearly infinite tolerance for the foolishness of my fellow humans sometimes exhausts itself, and I find myself making statements that begin, "It's a good thing I'm a libertarian, because otherwise ..."

One thing that gets to me is the trendy notion that descendents of slaves ought to be paid reparations by descendents of those who owned slaves—one of the dumber ideas ever to boil out of the repellent porridge professional parasites call their brains.

Some of my ancestors from the Old South owned slaves. My mom tells stories of her great-grandmother's "mammy", a role we associate today with young Irish or Hispanic immigrants working at minimum wage. Others were slaves themselves, Polish serfs who belonged to whatever genetically impoverished Cossack claimed the land they farmed—imagine Fiddler on the Roof being Catholic instead of Jewish. They wisely "followed the Drinking Gourd" to Pennsylvania, where they clawed coal from the ground under conditions that speak eloquently of how they'd hated being some inbred aristo's property.

If this reparations stuff ever gets beyond mere salivation and I'm forced to fork over, to my great-great-grandmother's mammy's great-great-grandchildren, hard-earned wealth they don't deserve, for something I never did, does that mean some Russian owes me, or is this just a black thing? This nation literally tore itself to pieces trying (so many believed) to end slavery. If reparations are called for, they were paid in full by 620,000 victims of the War Between the States.

Another thing that gets to me: there are few Star Trek fans more enthusiastic than I am. Despite its drooling Utopian fascism, it's held my interest from the first time Jim Kirk told us the stardate to the moment Voyager came home. But one thing that never fails to blow my cork is the collection of stupidities represented by Kathryn Janeway's "native American" first officer.

I even favor open immigration, provided that the third of America—half the west—held illegally as "public land" is surrendered to individual ownership; welfare is extirpated root and branch; and newcomers are required to sign off on the first ten amendments to the Constitution. (If they later advocate violations of those amendments ... well, it's a good thing I'm a libertarian.)

So spare me the bilge about the wisdom and spirituality of those it's politically incorrect to call Indians. If I hear the words "spirit guide" or "vision quest" once more, especially on a series about a 24th century interstellar spacecraft, I'm going into warp myself—backwards—propelled by vomit. The Soviets collapsed because their ideas—Hegel, Marx, Lysenko—were crap. It may be impolite to say so, but more than Springfields or Winchesters, it was the nonsense Indians believed that defeated them.

These were folks so "close to nature" they ran herds of buffalo off a cliff so they could butcher a couple for lunch, so "in tune with the environment" that, despite claims they "used all of the buffalo" (something packing plants are vilified for), their pre-Columbian movements about the continent can be tracked by following a trail of their garbage heaps.

True, my ancestors—the slaveholders; the serfs hadn't arrived yet—weren't nice to Indians. They gave them blankets from smallpox fatalities. It's claimed my folks taught theirs to scalp enemies. But even if that's true, it's also true that although Robert Heinlein taught me, in a couple of books, how to cut up a dead body in a bathtub, I've never felt obliged to try it.

Moral enlightenment is an invention, as surely as penicillin, plutonium, and the Pentium. If we don't condemn our ancestors because they died like flies from diseases that could have been cured with a spoonful of bread mold, or because, lacking nuclear power, they burned every tree in Europe, or because, failing to create word processors, a million monks got writer's cramp, does it make sense to revile them for not having stumbled across the Non-Aggression Principle?

If there's anything more insane than holding ancient people to moral standards that hadn't been invented yet, it's holding modern people responsible for the acts of ancients who didn't know any better. Next time I run into one of those professional "Native American" crybabies, it's going to be hard to resist grabbing him by the squash blossoms and saying, "My ancestors and yours both believed in the right of conquest. Yours lost. Get over it!"

Ancient remains have been found in the Pacific Northwest, the Carolinas, and South America, of non-Indian people. Attempting to preserve its victim status, today's Indian political establishment struggles to claim these remains and literally bury them before they get full scientific scrutiny. Maybe what I oughta yell at Mr. Squash Blossom is, "What did you do to Folsom Man, you genocidal monster?"

What I'd rather do—what anybody rational would rather do—is learn from the past and set it aside. It has much to teach us—it informed the Founding Fathers—and heaven knows we have much to learn from it. But we aren't going to learn anything from spirit guides or racial demagogues.

That's why it's imperative to tell the Guilt Lobby to get a life, and convince every senator, congressman, legislator, councilman, commissioner, and dogcatcher that any who vote for reparations will be found the next morning – well, won't be re-elected.

L. NEIL SMITH is the award-winning author of more than 20 novels about individual liberty and the right to own and carry weapons.  You can read his essays, or check out his books at the Webley Page.