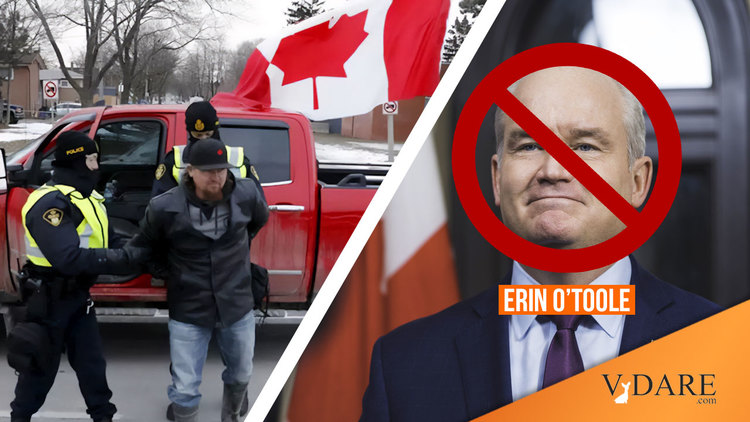 It’s possible that Canada’s Senate will not approve Prime Minister Justin Trudeau’s invocation of the draconian Emergencies Act against the Canadian truckers’ Freedom Convoy, and even if it does today’s scenes of police manhandling protestors are exacerbating unease even among his own Liberal Party Members of Parliament, such as Joel Lightbound, Yves Robillard, and Anthony Housefather [Third Liberal MP breaks with Trudeau on COVID restrictions, by Anthony Murdoch, LifeSite, February 14, 2022]. They could well decide that Trudeau, who presides over a minority government, is a liability to them in the next general election, which must come soon. If so, Trudeau will be the second federal party leader whose fall is attributable to the truckers. The difference, however, is that the fate of Conservative leader Erin O’Toole illustrates a more general truth: the wages of cuckservatism is death.

O’Toole, who became leader only in 2020, did as the “experts” instructed and moved left, but was sacked anyway [Stunning fall: Canada's Conservatives boot leader O'Toole, by Andy Blatchford, Yahoo News, February 2, 2022]. There’s a lesson to be learned, but it likely won’t be. Whoever succeeds O’Toole will undoubtedly continue to hail the Great Replacement and, demography being destiny, the Canadian Conservative Party will go the way of the American Whigs.

O’Toole, despite his Christian name, is actually a man. “Erin” literally means “Ireland,” so it would appear his parents were keen to present him as Oirish. He was a weak leader who replaced another weakling, Andrew Scheer. He campaigned  for the CPC’s leadership as “True Blue” [Opinion: Canada’s Conservatives pick Erin O’Toole as leader — and reject the temptation to go left, by J.J. McCullough, WaPo, August 24, 2020]. But he dithered up a storm (first anti-carbon tax, then pro, first pro-gun, then anti-gun [O'Toole reverses course on guns, will maintain Liberal ban during review of classifications, CBC, September 5, 2021]) and moved the CPC even further to the “center,” which in Canada means decidedly to the left of Joe Scarborough.

O’Toole, a Central Canadian, did not seem to realize that the Liberals, tireless warriors against mankind’s eternal enemy, carbon, intend to move to “net zero” as soon as possible, which would destroy Canada’s resource industries and, concomitantly, the economies of the Western provinces of British Columbia, Alberta and Saskatchewan—the Conservative heartland [Rex Murphy: Why is it Canada's 'duty' to destroy its economy and Confederation in the pursuit of net zero?, January 20, 2022].

O’Toole’s downfall has been blamed on the trucker’s revolt; he certainly was dumbfounded by this, while rival and possible successor Pierre Poilievre, as least initially, supported the Freedom Convoy ['I'm proud of the truckers,' says Poilievre in lambasting Justin Trudeau's response to protests, by Catherine Lévesque, National Post, February 11, 2022]. But it was only a pretext. O’Toole was ousted because he fared no better than Scheer at the polls (he got 33.74% in 2021 vs. 34.34% % in 2019—but notice that both polled better than Trudeau’s Liberals, who won the majority of seats only because of quirks in the first-past-the-post system).

Additionally, O’Toole stood for nothing. During the 2021 general election, he grovelled to the Francophone province of Quebec as no federal leader had ever grovelled before. Chris Selley of the National Post marvelled, “His appeal to [Quebec] nationalists…could only have been more intense had it been delivered on bended knee” [Chris Selley: O'Toole swings for the fences in Quebec, August 20, 2021].

It didn’t work, of course; the Conservatives won the same amount of seats in Quebec as under Scheer (10 of 78).

O’Toole also grovelled to junkies, promising to treat illegal drug use as a disease instead of a crime. His reward was to be accused of being insufficiently junkie-friendly [O'Toole would allow safe injection sites, but stops short of decriminalization, CTVNews, August 22, 2021]. Marijuana is already legal in Canada, and our leaders are determined to meet the “opioid crisis” (which is killing far more British Columbians than COVID-19—Opioid deaths in B.C. far outpaced those from COVID-19, Vancouver Sun, October 22, 2021) by making it easier to procure and use drugs “safely.” (The Trudeau government now tolerates the distribution of free heroin and other drugs.)

O’Toole also endorsed the Hoax of the Century, the accusation that thousands of Canadian Indian children were dumped in unmarked mass graves at residential schools, possibly after being murdered. There is absolutely no evidence of this. But “reconciliation” (endless apologies and gibs) is the order of the day.

Apparently closest to O’Toole’s heart, despite his professed Catholicism: the ambition to supplant the Liberals and NDP as leader of the pro–Alphabet People party. He demanded that the government compel Canadian Blood Services to accept blood donations from male homosexuals, with no conditions [O'Toole releases Pride video as handful of MPs oppose bill to ban conversion therapy, by Stephanie Taylor, June 1, 2021]. (Never mind that this practice ended rather badly in the 1980s—remember AIDS?) O’Toole even cajoled his young son to be photographed in a pink shirt for “Anti-Bullying Day.”

Bullying is unacceptable and has lasting consequences. Today, my family and I are wearing pink to stand with kids who are feeling the weight of the world right now. We're here with you. pic.twitter.com/lWl5OBkfKM

It is rumored that O’Toole was defenestrated because of backlash against his greatest “triumph,” forcing his caucus to support the unanimous passage of a bill that criminalizes counsel against the sexual mutilation of children, with penalties of up to imprisonment for five years [Criminalising parental love, by Brendan O’Neill, Spiked, January 22, 2022].

All of this probably reflects the influence of the gay PR spiv mafia that has come to dominate the Conservative Party. (In the U.S., it’s campaign consultants, but there are legal limits on what can be spent on Canadian elections.)

Most important of all, O’Toole had expressed no interest in the National Question and no problem with the continuous replacement of Canada’s founding peoples with fractious, rebarbative foreigners ("so long as they immigrate legally”—sound familiar?).

Of course he had no recorded objection to Trudeau’s mad decision to import 1.2 million “new Canadians” from 2021 to 2023 [Canada breaks historic immigration record, Western Standard, December 24, 2021], despite Canada’s ever-increasing Balkanization and ever-worsening housing crisis (it’s since risen to 1.3 million from 2022 to 2024).

What’s happening in Canada cannot be in doubt. It was revealed by a British Labour Party adviser over a decade ago: “to rub the Right's nose in diversity and render their arguments out of date,” and thereby doom Britain’s Conservative Party.

As currently constituted, the Conservative Party of Canada cannot long survive as a rival to the Liberals, Canada’s “natural governing party.” The only hope for the CPC is to be reborn as a populist party. This worked in America for Donald Trump and in Britain for Boris Johnson, but what are the chances of it happening in Canada?

However, Maxime Bernier remains in the game. The former Conservative MP, who lost a “ranked-ballot” Conservative Party leadership election to Scheer even though he got more votes, is now leader of the breakaway People’s Party of Canada. Bernier is a curious amalgam: a libertarian populist. Libertarianism is a non-starter in Canada, but Bernier’s forceful opposition to Canada as the world’s “first postnational state” has received considerable support [The Canada experiment: is this the world's first 'postnational' country?, by Charles Foran, Guardian, January 4, 2017]. His party, which holds no seats in the House of Commons, commands 5-13% in the opinion polls. There are signs that this is growing: Trend shows 'material increase' in PPC accessible voters: Nanos, CTVNews, February 16, 2022.

Bernier is not afraid to attack the Regime Media, which is widely loathed in Canada despite its hegemony. Were he to dial back his own “muh free enterprise” tendency, thunder against immigration as a plot to lower wages, worsen working conditions and push Canadians out of the cities they built—that is, employ the Sailer Strategy and graze where the grass is—he might leapfrog the CPC and present a real alternative.

After all, demonized as they are, whites are still a majority here.

Kevin Michael Grace lives in Victoria, BC. He hosts the YouTube livestream The KMG Show, 4-6 pm PT, Monday to Friday and is @KMGVictoria on Twitter