In October, Washington State apple growers convinced Governor Christine Gregoire and the Seattle Times that a state of emergency existed: no workers could be found to pick their apples!!

Apple growers say they could have had one of their best years ever if a shortage of workers hadn't forced them to leave some fruit on trees.

This is a familiar story to VDARE.com readers. See

How did Washington State apple growers go looking for pickers? They posted signs along the road! The credulous Seattle Times even printed pictures of hand-printed Spanish-language signs to show their “good faith” effort to attract workers.

The apples, of course, do need to be picked. This can hardly be a surprise to the farmers. But did they plan ahead and apply for agricultural workers through the H-2A visa program? Some did, but most did not—because, according to the Seattle Times story, the cost of H-2A workers is too high.

In addition, many growers claim that the H-2A Temporary Agricultural Worker visa process is too complicated and cumbersome.

Of course, the U.S. Citizenship and Immigration Services requirements are indeed cumbersome—compared to simply hiring from a labor contractor, or hiring workers who just happen to be driving down the road and see a sign.

The sordid truth: Farmers simply do not like the H-2A visa program because they must pay for housing, food and transportation of the temporary farm workers from the border.

Another of those complicated and cumbersome USCIS requirements: the employer must demonstrate that there are not sufficient American workers who are able, willing, qualified, and available to do the temporary work.

But there’s an easy way around this: recruit through the state employment office and require that the workers have “experience.”

Requiring “experience” is bogus, of course, because there is no reason an apple picker needs more than one day of experience. Some farmers have hired state prison inmates at a rate of $22 per hour. Were they “experienced”? No. Usually, farmers pay by the quantity of apples picked. Good pickers can earn $150 a day. The reality is that new pickers probably can only bring in $50 to $100 a day but the inexperienced prison inmates did just great. They worked eight-hour days at $22 an hour and that comes to $176 a day. They were also housed and fed. The state picked up most of the wages. [WA prison inmate apple pickers picking up speed, By Rick Steigmeyer, The Wenatchee World, November 2, 2011]

After days of reading farmer sob stories in the paper, Craig Keller of the local immigration patriot organization Respect Washington decided to try picking apples. He applied to the state Department of Employment Security. He was rejected because he had no “experience”.

Indeed, after the first story ran in the Seattle Times, hundreds of people applied for picking jobs. They were rejected for lack of experience also. 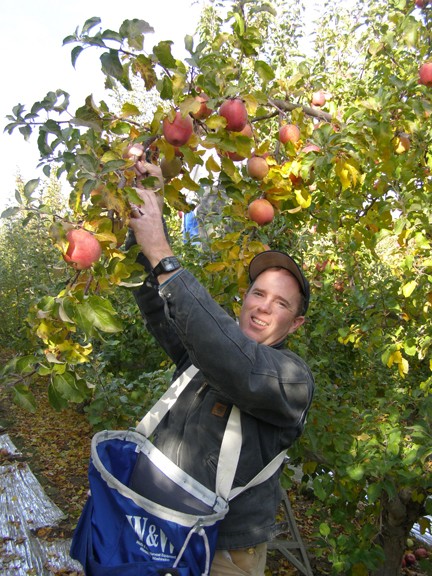 In an e-mail to several friends, Keller wrote,

“I’m a newly minted migrant worker. After today, my first day of apple picking, I can say I have experience! The weather is lovely and it’s great getting outside.”

Keller observed “lots of Mexicans” in the orchard. Some of them were sleeping in their cars—the grower where he was working provided no housing. Craig stayed with a friend, otherwise his adventure would not have been affordable.

In later emails, Keller noted that the grower who employed him allowed a developer of a picking machine to test it out in the orchard. He described it as “a moving platform from which the pickers drop the apples into a vacuum tube that conveys the apples to a storage bin.”

Perhaps some growers will begin to think about reducing their needs for thousands of illegal aliens by mechanizing . . .and perhaps not.

After his adventure, Keller emailed,

“In early November I picked Fuji apples for nine days to ‘walk in their shoes.’ What I concluded is that the farmers pay way too little to expect a transient population to show up and provide this service.”

Big growers and small growers want the “gravy train” to roll on according to Keller. They have been spoiled by the easy flow of illegal laborers who must sleep in their cars or in tents. Keller noted that although some growers provided communal housing, it is very basic, and still the pay was too low for the “necessities of life.”

Sadly, no help will be coming from our elected officials. Here is the response I received from Congressman Rick Larsen of Washington (D-2) when I asked that he support mandatory E-Verify:

“Congress must update our immigration policy, pass immigration reform, and do it comprehensively without causing problems that could have devastating impacts for our local communities. I want comprehensive reform that includes tough border security and immigration law enforcement, while also providing for a stable and legal workforce in agriculture. Until Congress can address the need for a stable and legal workforce for our farmers, we should wait on the mandatory use of E-Verify. “

Representative Larsen has worked so hard to provide “tough border security and immigration law enforcement” that he has earned a grade of F from NumbersUSA.

He is no worse on this issue, however, than Washington state legislators. My state senator, Mary Margaret Haugen, who chairs the Senate Transportation Committee, stated at a town hall meeting in March that Washington must continue to give drivers’ licenses to illegal aliens. The reason, according to Senator Haugen: farmers do not like unlicensed farm workers driving their expensive equipment!

She is a really nice lady and, sadly, I think she was serious.

Last month, when driving in an agricultural area, I saw about ten Hispanic men sitting at and standing around a picnic table. Behind them were two tents and a portable toilet. Two of the men were cooking something on a cheap, portable barbeque pit. They were harvesting winter squash.

Surely Main Stream Media reporters covering the alleged “shortage” of farm workers saw many living situations similar to this. Why did they fail to report it? Where are the photos? Where is the outrage? Why do politicians carry the mail for these unscrupulous employers?

And, what does the Southern Poverty Law Center ($PLC to VDARE.com) have to say about these slave-like conditions?

When I was a child, my family drove every summer from Maryland to Texas to visit my grandparents. I was shocked by the living conditions of the share croppers. I am now shocked that farmers still  expect their workers to live in this same squalor.

Craig Keller’s first-hand account of apple picking from within confirms what immigration reformers have long argued: Americans will work at agricultural jobs if the wages and working conditions are good—or they will invent machines that will do the work. But farmers simply do not want to pay good wages, much less provide shelter, transportation and food—or capital investment.

A century and a half ago, this is the same business model that southern farmers used to grow cotton. But why are Americans supposed to cower before this new “Slave Power” today?

Linda Thom [email her] is a retiree and refugee from California. She formerly worked as an officer for a major bank and as a budget analyst for the County Administrator of Santa Barbara.