With major assistance from the Main Stream Media,  Libertarian Party candidate Gary Johnson is being hyped as a supposed alternative to Donald Trump. But if you’re an immigration patriot, Johnson isn’t your candidate. He’s nothing less than an Open Borders fanatic.

In a 2000 interview, Johnson flatly stated:

[A Candid Conversation With New Mexico's Fearless Governor About His Crusade To Legalize Drugs, His Killer Workout Regimen And The Upside Of Carrying A Concealed Weapon , Playboy, January 2000]

That was 16 years ago, but there’s no evidence Johnson has changed his mind since then. In 2012, Johnson opposed Arizona’s efforts to combat illegal immigration. More recently, his emotional, borderline hysterical-reaction against attempts to control immigration reflects a deep seated animosity against Americans.

Check out these examples of a supposedly adult man doing the “point and sputter.” Like some campus SJW, Johnson flips out at the very mention of the term “illegal immigrant.”

In the last video, Johnson slaps together a long series of clichés. I pulled the following extracts:

“Immigration a good thing…we are a country of immigrants….make it as easy as possible to come into this country and work…so issue work visas…don’t build a fence across the border…increase 50%...there should be a pathway to citizenship…make it an easy process to come in the door and get a work visa…human and economic catastrophe to deport 11 million undocumented workers…what Donald Trump is saying regarding immigration could not be more incendiary…it is insulting to me coming from New Mexico…Obama has deported 2 million heads of households, he has broken up two million families….when you use that term illegal immigrant you are upsetting a lot of people, just so you know…I would not be involved in a house to house checking of papers and literally taking people, arresting them and returning them to Mexico when these are families that haven’t been in Mexico for 30 years many of them ”.

Does Gary Johnson not get it? Does he not understand that hordes of immigrants, legal and illegal, who are entering our country today are not libertarians and are not going to vote for libertarian principles? Those who wind up voting at all can be counted on to vote for Big Government.

Of course, Johnson isn’t much of a libertarian. If you believe in freedom of association, Gary Johnson is not your candidate. If you are a baker who doesn’t want to participate in a gay wedding, Gary Johnson thinks you ought to be punished [Libertarian Candidate Gary Johnson’s Religious Liberty Problem by Nate Madden, Conservative Review, May 25, 2016]

But it gets worse. Johnson recently hired the notorious Juan Hernandez to head up his Hispanic outreach department.

Hernandez is a Mexican-U.S. dual citizen, born in the States to a Mexican father and American mother, and educated in American universities. Hernandez opportunistically gravitated to both George W. Bush and Vicente Fox before each became president of his respective country. In fact, it was Hernandez who arranged their first meeting.

During the first heady days of the Vicente Fox administration, Hernandez was in charge of Fox’s Presidential Office for Mexicans Abroad. The official goal of this office   was “To attend to the millions of Mexicans and Mexican-Americans who live in the United States as citizens, residents, temporary workers and illegal aliens…. ….”[presidencia.gob.mx, Archive.org, August 2002, my translation]

Note that “citizens” refers to people who are American citizens—but who are still expected to identify as Mexicans. Indeed, the office’s website spelled that out when it said “Mexico is one nation of 123 million citizens–100 million who live in Mexico and 23 million who live in the United States”. That 23 million figure included both Mexicans and American citizens of Mexican ancestry. (The Mexican government now claims the total as 35 million). See my 2002 article  Hernandez Out – But His Soul Goes Marching On.

As head of this office, Hernandez traveled around in the U.S. meddling in local politics, agitating for driver’s licenses for illegal aliens, and openly proclaiming the “123 million-strong Mexican nation” doctrine. Of course nobody in our government objected.

In a 2001 interview with the Denver Post   Hernandez said Mexicans in the U.S. “are not going to assimilate, in the sense of dissolving into not being Mexican.” [Mexican president heads to Midwest seeking economic investment and rights for Mexican illegals, By Bruce Finley, The Denver Post, July 11, 2001] On Nightline (June 7, 2001), Hernandez stated bluntly that “We are betting that the Mexican American population in the United States….will think Mexico first.” And there’s much more where that came from.

In 2002, Hernandez was bumped from his position and placed in a government position unrelated to immigration. The best evidence indicates this was the result of a struggle for power within the Fox cabinet. Foreign Minister Jorge Castaneda was reportedly not pleased with Hernandez's activities and comments. Not that Castaneda disagreed. Still, Castaneda felt it was his prerogative to negotiate away American immigration policy, not Hernandez’s.

Since 2002, Hernandez has served as a co-founder of Hispanic Republicans of Texas and as an advisor for various corporations and candidates.

He advised Felipe Calderon’s successful campaign for the presidency of Mexico in 2006. In 2008, he was Hispanic Outreach Director for John McCain’s disastrously unsuccessful candidacy for president of the U.S. In 2011, Hernandez advised Juan Gutierrez in Guatemala, who placed seventh in the first round of the Guatemalan presidential elections in 2011.

Hernandez announced his support for Johnson in the Washington Post in a column which called Trump as the “most insulting and dangerous candidate in the history of this nation” [This Latino Republican will support Libertarian Gary Johnson, August 9]. When a candidate who wants to control our borders and protect Americans is smeared like this, we know where Hernandez really stands.

Hernandez’ column was just a compilation of straw-man attacks against Trump. He then announced he supported Johnson because:

[Johnson] proposes an immigration overhaul that includes: vetting immigrants and refugees and excluding anyone with criminal backgrounds; ensuring everyone pays taxes and Social Security; and putting newcomers at the end of the citizenship list. I call that smart and compassionate immigration reform, much like what has been promised by President Obama and Clinton herself, but never delivered.

Who can believe that a President Johnson would be “vetting immigrants and refugees and excluding anyone with criminal backgrounds” and “putting newcomers at the end of the citizenship list?”

But here’s the best part. The article ends with: 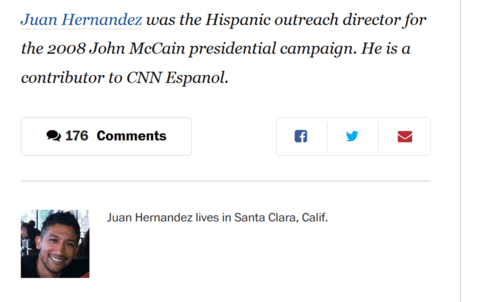 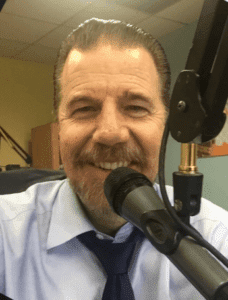 The Juan Hernandez in the photo is a Trump supporter! This Hernandez was attacked by anti-Trump thugs after a Trump rally and had his nose broken. [I’m voting for Donald Trump, so I went to see him speak. Protesters broke my nose, by Juan Hernandez, Washington Post, June 10, 2016]

Or does that not fit into the narrative?

Gary Johnson is not any sort of worthy alternative. In fact, it’s not an alternative at all. It just more of the same Open Border fanaticism that is destroying our American nation.