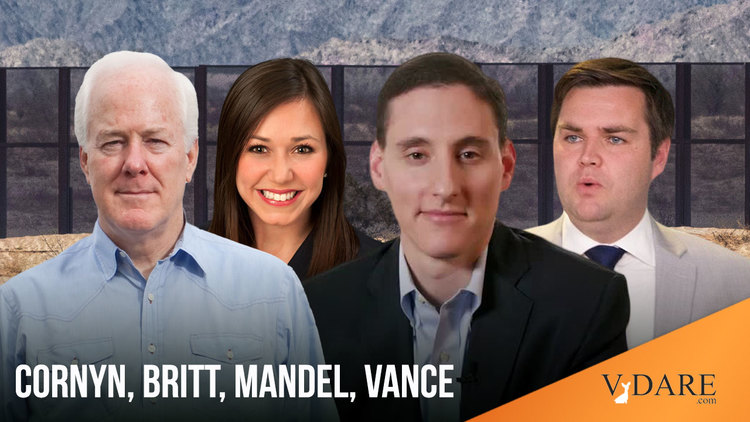 The Biden Regime will scrap the implementation of Title 42 at the end of May. Discarding the use of this sensible immigration law to deport illegal aliens for health reasons—in this case, the Flu Manchu—will, of course, worsen the border crisis. Biden’s own people have predicted as many as 18,000 illegals per day will cross the border. The Border Patrol warned the country was about to get “wrecked” [Biden administration to lift Title 42 at end of May, despite fears of looming migrant wave, by Adam Shaw, Fox News, April 1, 2022]. Biden’s border treason and open refusal to enforce U.S. immigration law has compelled even Establishment  Republicans to focus on immigration. And it is showing up, sometimes surprisingly, in GOP primaries.

Two signs of the GOP’s interest in immigration come from GOP congressional leadership and Donald Trump. Last week, the Senate Republican Conference sent out a memo to its members with talking points the party should emphasize to illustrate the importance of immigration [Senate GOP To Crank Up The Heat On Biden Border Crossings, by Ryan Lizza, Rachael Bade, and Eugene Daniels, Politico, March 30, 2022]. The three basic points:

The SRC memo also details Biden’s disastrous “Open Border” policies, which have essentially ended border security and internal immigration enforcement. Beside ending Title 42, he’s trying to end Remain in Mexico, and eased the procedure for illegals to claim asylum. The SRC puts a law-and-order spin on immigration by warning that Biden’s policies empower drug cartels and allow their poisons into the United States.

This effort appears to be led by Texas’ John Cornyn. Politico reports he met with his colleagues and emphasized the issue’s importance. Cornyn is an odd figure to lead this fight. VDARE.com has detailed his many attempts at cucking, from favoring various forms of Amnesty to championing the anti-white Juneteenth holiday. But even a cuck like Cornyn understands that immigration is now a winner for Republicans.

Trump, of course, knows this too. In a wide-ranging interview last week, the former president outlined what his party’s focus should be in the midterms: immigration and the border crisis. And unlike Senate Republicans, he called for more than just reinstating his old policies. He seemed to imply support for mass deportation of illegals and said America should threaten to cut off aid to countries that refused to take back their people:

We have to immediately seal up the border. … And we have to get a lot of the people out because many of these people came from prisons in these countries.

Britt’s new platform calls for immigration reduction across the board, the curtailment of guest worker programs, mandating e-Verify, and reforming birthright citizenship so that it only applies to the children of parents lawfully in America. Her new plan specifically denounces mass immigration and sees the root of the problem in the 1965 Immigration Act.

This legislation removed common-sense numerical caps and created a chain-migration system, leading to more than one million immigrants entering America every single year. This has driven down the wages of Alabamians, especially those without college degrees.

America’s immigration policies have been good for foreigners who want to come to America. But they have been bad for American workers. That needs to change.

Britt is the Establishment candidate, vying for Trump’s support after the former president rescinded his endorsement of long-time immigration patriot Mo Brooks [Trump rescinds Brooks endorsement in Senate race in Alabama, by Kim Chandler and Jill Colvin, Associated Press, March 23, 2022]. Brooks also boasts a solid immigration platform, but it does not outline specific policies like Britt’s, although it does support immigration reduction. Britt’s reversal shows she knows that to win the MAGA base, she must be an immigration patriot. She cannot hope to secure their support campaigning on a Business First agenda.

Other GOP hopefuls propose good policies. Ohio Senate candidate J.D. Vance made immigration a chief focus of his campaign. Unlike most Republicans, he says America’s lawmakers should focus more on immigration than Ukraine. “I will be damned if I am going to prioritize Ukraine’s eastern border right now when our own southern border is engulfed by a human tsunami of illegal migrants,” he wrote in a recent column ['I will be damned' if Ukraine prioritized over 'Tsunami of illegal migrants', Columbus Dispatch, March 31, 2022]. Like Britt, he supports reducing legal immigration and reforming our system to put Americans first.

While other Ohio candidates don’t touch legal immigration, Vance’s opponents talk tougher about illegals than current Republicans. During a debate last week, former Ohio treasurer Josh Mandel said America should deport every single illegal. That’s a line you rarely hear from Republicans, so it is reassuring that at least one Republican wants to do it—and has the courage to say it.

His strategy appears to be working. Despite being a political newcomer with no history of elected office, Masters leads the packed Arizona race in some polls [Blake Masters leads in Arizona Senate poll, by David Drucker, Washington Examiner, May 21, 2022]. Masters’ Twitter feed, by the way, is a breath of fresh air. Check out the main photo and some of his tweets: 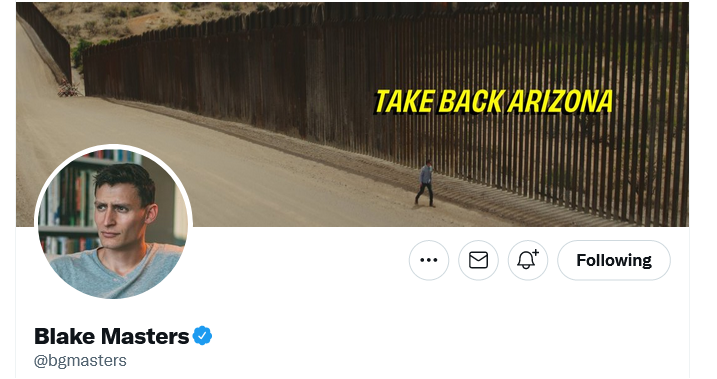 “Working on how to stop illicit drug trafficking” is pretty rich coming from an Open Borders guy https://t.co/nkxJmJPFK7

We need an immigration moratorium to put #AmericaFirst 🇺🇸 pic.twitter.com/bqDMrsLbIv

Ending immigration in America will be a priority in my office.

All this shows why Republican leaders must do more than denounce Biden’s border treason. They must discuss and promote policies and introduce legislation and force the Democrats to vote it down. Granted, the SRC memo discussed strengthening border security, stronger detention policies, and support for Title 42 and Remain in Mexico. But those won’t solve the problem.

Republicans must push for cuts to legal immigration, mandatory e-Verify, and ending birthright citizenship, an especially important issue. Currently, any woman who enters the U.S. illegally and has an anchor baby here has given birth to what is technically an American citizen, even if she has only been in the U.S. for minutes. As a practical matter, she and her partner won’t be deported and the citizen child will grow up to vote Democrat. Republicans must insist on ending this suicidal policy.

Immigration will be one of the central issues of the 2022 campaign. Republicans must exploit it, demand tougher immigration policies, and implement them when they win. Talk is not enough.