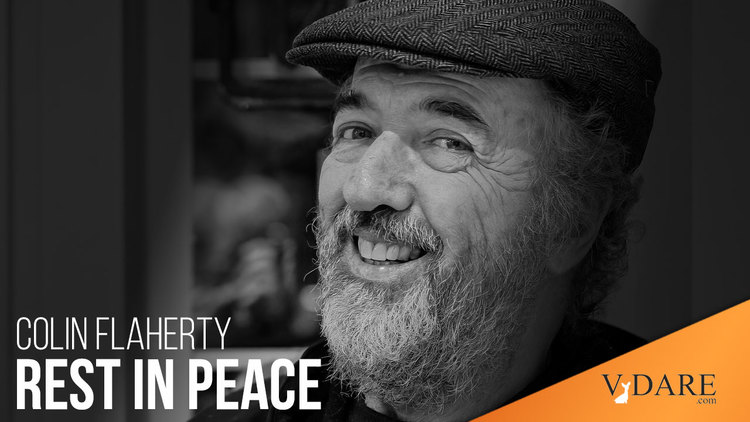 Colin Flaherty died Tuesday January 11th, with family at his side, in the house in which he grew up in Wilmington, Delaware. He was 66 years old and suffered from cancer. Probably best known for his books, White Girl Bleed a Lot and Don’t Make the Black Kids Angry, he was a very successful podcaster, live-streamer, and author.

Colin’s books on the color of crime were praised by a number of blacks, including Thomas Sowell and Allen West. Larry Elder interviewed him, most recently on March 15, 2021. Huffington Post, of course, called his reporting “race-baiting,” and Heidi Beirich of the Southern Poverty Law Center wrote that by publishing him, American Thinker—where he has an extensive archive—had “sunk to the bottom of the racist barrel.” I did not meet him until early 2018, but admired his charm, eloquence, and good humor, and did several interviews with him.

Colin was reared Catholic, and his early politics were Democrat. In 1967, he was badly shaken when his brother Kevin was killed in action in Vietnam. In high school he was president of the Catholic Youth Organization for the Diocese of Wilmington. He organized food drives and distributed meals to poor people. In 1972, he organized a meet-and-greet for a then-unknown candidate for the Senate: Joe Biden, in his first run for public office.

That same year, Colin hitchhiked to Miami to protest at the Republican convention that nominated Richard Nixon and Spiro Agnew. He was arrested, along with several hundred other demonstrators. This photo from the September 1972 issue of Rolling Stone is his booking photo. The T-shirt he is wearing has an image of Nixon with fangs dripping blood; its message is “Eat the Rich.” As noted in Colin’s handwriting, he then went to jail for two days with Allen Ginsberg as a cell mate. “Ooomm” is the sacred Hindu syllable that Ginsburg famously chanted. The look on Colin’s face says it all: even as a rebel, he was goofy, fun-loving, and loved to laugh. He was serious when he needed to be, but always loved to stir things up. This photo is included in Hunter Thompson’s 1973 book, Fear And Loathing On The Campaign Trail ’72.

Young Colin was already reading widely and had a thirst for adventure. He attended the University of Delaware for a year in 1974, but dropped out to join a carnival called James E. Strates Shows that toured up and down the East Coast. He worked backstage and in logistics, but learned to swallow swords and juggle—skills he never lost.

Colin left the show in Florida and lived for a while in Key West, where he worked as a cook. Before long, he set out for a month’s-long tour of Mexico on his Triumph motorcycle, and ended up back in Wilmington in 1976. He then hitchhiked West; the end of the highway for Colin was San Diego, California, where he won a California Regents’ Scholarship to UC San Diego. He worked in political consulting and business troubleshooting, but was also a passionate investigative journalist, who loved tracking down facts and interviewing people. He won many journalism prizes and was best known for a 1992 article for the San Diego Reader that uncovered so many facts that it won the release of a black man, Kelvin Wiley, who had been unjustly imprisoned for beating his white ex-girlfriend. He sometimes worked full-time for papers, but preferred the independence of freelancing.

In 1981, Colin married the daughter of Lionel Van Deerlin, a Congressman who represented San Diego from 1963 to 1980. The couple had two children and Colin got on very well with his Democrat father-in-law.

Colin was a sportsman. He loved beach volleyball, and in the late 1980s and early 1990s, he played every Sunday in Ocean Beach. He played golf—probably his favorite outdoor sport—for as long as he was able. And, of course, he loved cigars.

Colin continued to work in journalism and consulting, and occasionally taught university classes in interviewing and news research. The crash of 2008 cut deeply into his consulting and media work, and he moved back to Wilmington, Delaware, but he kept studying and learning. This is a continuing-education certificate he earned in 2010. As a 53-year-old, he went back to hitchhiking, and wrote his first book, Redwood to Deadwood: Hitchhiking America Today. He had learned to snowboard when his children were teenagers and during this period of vagabonding spent a season in Colorado teaching snowboarding.

Colin wrote thrillers. In 2011, he won first prize in the Washington Post Spy Novel Writer’s Contest. The judge called his submission the “strong favorite,” adding that  it “manages to advance the story, and twist it in a new and interesting direction, very deftly.” Take a look for a Colin Flaherty you never knew.

Later in the 2000s, Colin became interested in the very high levels of black crime, which he found were ignored and downplayed in the media. He was not robbed or assaulted, nor were his family or friends; his reporter’s instinct simply drew him to a story that was beig smothered. It was at this point that the larger world began to hear of Colin Flaherty. His books were Amazon best-sellers—until Amazon pulled them, along with many other dissident titles.

Colin was a genius at tracking down crime stories. He had constant alerts on his computer and a network of fans—including police officers—kept him up to the minute. No one—and I mean no one—worked so hard and so effectively at exposing media hypocrisy on black crime. Before it was shut down in 2016, his YouTube channel was earning $12,000 a month. He also lost PayPal and Facebook, but managed to keep a Twitter account to the end. His livestreams were hugely popular, with a regular group of “studio guests” adding laughter and commentary. His close circle will archive and categorize his livestreams and plans to continue doing them. I didn’t meet Colin until January 2018, at a gathering of dissidents. I hadn’t realized he was so tall—six feet five inches—and he was every inch the good-natured, erudite man I expected him to be. We worked together several times. We would tape a formal interview in the American Renaissance studio and then sit in the backyard for a Colin Flaherty livestream. Our off-the-cuff, beer-drinking, cigar-smoking livestreams were always better than the studio interviews. His fans—and I—never tired of his trademark phrases: “St. George of Floyd,” “St. Michael of Brown,” and the “denial deceit delusion” for which he blasted the media.

In 2020, I made up for years of neglect by inviting Colin to speak at our annual American Renaissance conference, but it was sacrificed to Covid. He was to be one of the top draws at last year’s conference, but to our sorrow, he became too weak to attend. Fortunately, “Allan the Barbershop Guy”—who enjoys one of the many nicknames Colin bestowed—gave a marvelous musical tribute. You can sample Allan’s very professional work here. Colin left us far too soon, but besides his enormous body of work, he left us a motto to live by: “without racism, without rancor, and without apology.” Rest in peace, Colin. You earned your place in heaven.