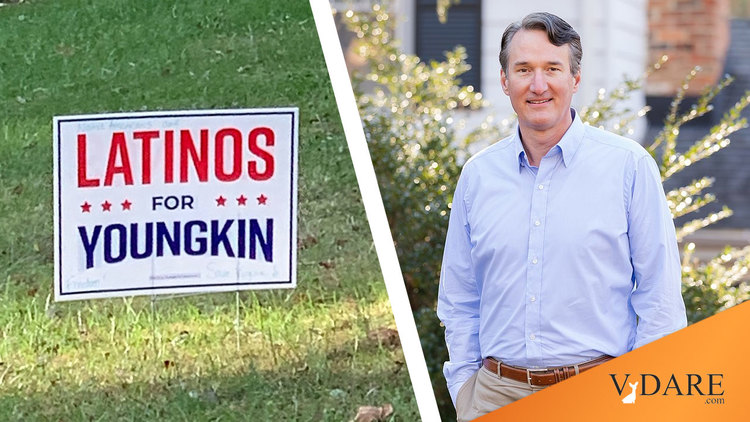 Since Glenn Youngkin’s victory in the Virginia gubernatorial election last month, Conservatism Inc. has been making the rounds with the usual brag that the GOP sweep was a big win for diversity. Of course, they showcased the victory of Winsome Sears, a Jamaican immigrant, for lieutenant governor, and Jason Miyares, the son of Cuban exiles, for attorney general. But they also touted the putative Hispanic majority that Republicans picked up [Explore AP VoteCast Findings in Virginia, Votecast Election 2021]. AP Votecast reported that Youngkin pulled 55 percent of the Hispanic votes to loser Terry McAuliffe’s 43 percent.

Hispanics' consistent and near monolithic vote for Democrats make that number look mighty suspicious, as I have pointed out earlier. But the number is so deeply desired that it might just be the tailwind that sends the GOP consultant class into even higher flights of Hispandering.

Normie Republicans should understand that Hispandering consultants are always pushing the idea that there exists a non-white vote just waiting for a GOP diversity appeal. But that fantasy of the untapped minority vote—inside every Asian, black, and Hispanic is a Republican dying to get out—justifies the grift the consultants run at the expense of GOP donors. 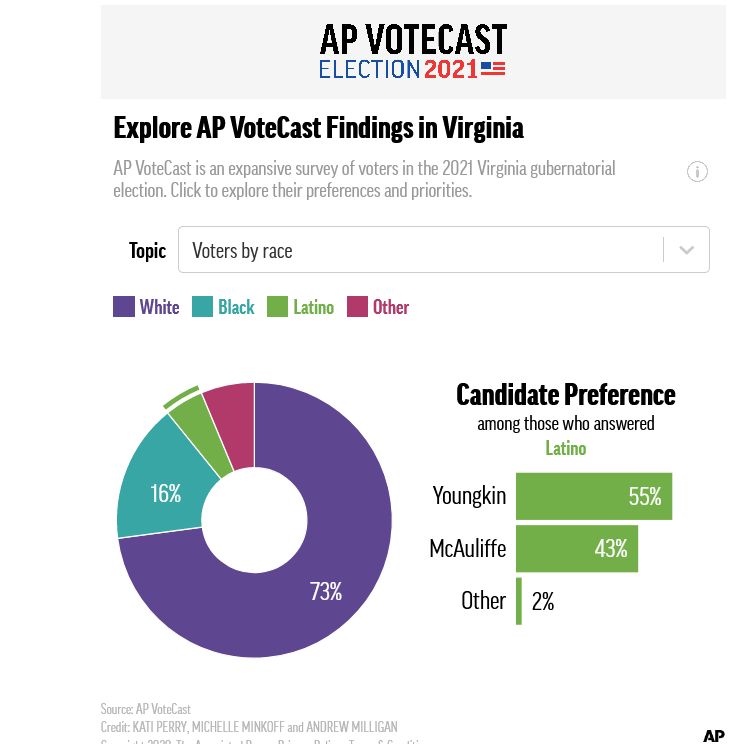 Anyone who filtered out all the post-election hosannas and parsed the data saw that white voters, not Hispanics, put Youngkin over the top. They voted for Youngkin 62 percent to 38, and made up 73 percent of the electorate [Exit poll results from the 2021 election for Virginia governor, Washington Post, November 2, 2021]. More telling was the turnout of white voters without a college degree. It grew from 26 percent  in 2017 to 36 percent [6 Takeaways From Glenn Youngkin’s Win in Virginia, by Ed Kilgore, New York Magazine, November 5, 2021].

Similarly, a new poll from the Wall Street Journal suggests that Republicans are making surprising inroads with Hispanics: 37 percent of Hispanics polled said they would back Republican congressional candidates, the same number that said they would vote for Democrats. Some 22 percent were undecided [Hispanic Voters Now Evenly Split Between Parties, WSJ Poll Finds, by Aaron Zitner, December 8, 2021].

Time will tell if the GOP continues picking up significant Hispanic support. Polls from the likes of the Wall Street Journal must be taken with a grain of salt given its history of promoting Open Borders. The findings might convince Republicans to stop talking about immigration restriction and Hispander even more.

Keep in mind several Big Picture Trends when discussing the Hispanic vote. Broadly speaking, the Hispanic vote will peak at about 70 percent for Democrats and dip to 60 every three to four election cycles. This has been a consistent trend since the 1980s.

My prediction: Once we enter the post-China Virus economy, Hispanics will revert to norm and be a solid Democrat vote. Hispanics tend to hold service sector jobs, which took a beating during the lockdowns, so many were in financial trouble. With the specter of lockdowns gone, they can trust the Democrats again—unless the Democrats drift even further to Black Lives Matter lunacy (which is not impossible).

Moreover, the Hispanic population in the U.S. is not monolithic. The experience of a Hispanic of Cuban origin in Miami differs from that of a Hispanic of Mexican origin in Los Angeles. Their experiences are alien to Hispanics in south Texas with ancestors who settled the area well before the founding of the American Republic [Why Democrats are Losing Texas Latinos, by Jack Herrera, Texas Monthly, September 13, 2021].

So Con Inc. brainstrusters have their wires crossed in trying to explain why Hispanics, especially border Hispanics, moved to Trump. Grievances against socialism ain’t the reason. Not every predominantly Hispanic area in America is Miami, where Republicans can count on Cubans, Nicaraguans, and Venezuelans who have lived under authoritarian left-wing governments. Con Inc. must learn—but probably won’t—that one cannot universalize political trends; the idiosyncrasies of the Hispanic vote must be considered. The braintrusters must also learn that Hispanic political preferences are at loggerheads with those of the Historic American Nation.

Even with the GOP’s improvements with Hispanics, it’s a tad exaggerated to suggest that Republicans are one or two elections away from historic inroads with them. If history is a reliable guide, the Hispanic vote stabilizes after a few years of overwhelming support for Democrats. Nonetheless, even when Democrats’ Hispanic vote tapers off, they still hold firm control of that vote. With the electorate becoming more Hispanic, Republicans in states like Arizona, Nevada, and Texas should be concerned. To boot, Florida could absolutely be in play for Democrats in the long term if non-Cuban, Hispanic migration outstrips the growth of the Cuban population in the state. As well, the descendants of the Cubans who fled Castro in 1960 don’t necessarily share the anticommunist fervor and Republican sympathies of their parents and grandparents. GOP higher-ups ignore this math, and that truth, at their peril.

Republicans must straighten out their priorities and appeal to their natural constituency. Is it non-whites, or the whites whose ancestors built this country? It’s nauseating to see Republicans routinely ignore whites and try to latch onto whatever non-white minority is in fashion among GOP consultants. It’s up to the Dissident Right to remind Republicans just who elects them to office.

Pedro de Alvarado [Email him] is a Hispanic dissident who is well aware of the realities of race from his experience living throughout Latin America and in the States.

As a native of lands conquered by brave Spaniards but later subverted by centuries of multiracial trickery and despotic governance, Pedro offers clear warnings to Americans about the perils of multiracialism.