The Roe v. Wade reversal ructions seem a good moment to point out that, during the crazy debate over the confirmation of Supreme Court Justice Brett Kavanaugh, when females seemed to have false memories of him raping them and exposing himself to them while he was a student at Yale, I commented The Democratic Party Has Tipped, To Minorities, Women, Gays—Expect More Kavanaugh-Type Hysteria in the Future.

Meltdowns have brought progressive advocacy groups to a standstill at a critical moment in world history https://t.co/C2coXPSSLq

Specifically, I noted research shows women are considerably higher in mental instability (“Neuroticism”), and this, after all, is basically just a means via which they can express their feelings to each other and also alleviate a sense of guilt and social anxiety about their own “racism,” “white privilege,” or whatever they’ve been told to feel guilty about.

They have other traits which can make them surprisingly more selfish (given that  women are higher in altruism and empathy), in the right circumstances, than men. As they take over society, and especially as they take over “caring” professions—such as teaching, medicine, nonprofits and Woke activism—this can have serious, and self-destructive, consequences. Witness Elephant in the Zoom: Meltdowns Have Brought Progressive Advocacy Groups to a Standstill at a Critical Moment in World History, by Ryan Grim, The Intercept, June 13, 2022.

Tellingly, The Intercept’s Grim actually quotes an observer of this fiasco:

We’re dealing with a workforce that’s becoming younger, more female, more people of color, more politically Woke — I hate to use that term in a way it shouldn’t be used — and less loyal in the traditional way to a job, because the whole economic rationale for keeping a job or having a job has changed.

Thus it appears there was a Zoom meeting on 2nd June 2020 at the Guttmacher Institute, a Washington D.C. abortion charity, so that workers could share how they felt about the death of George Floyd. The meeting was chaired by a female, naturally, and could reasonably be regarded as a complete waste of Woke time. How does an organization having a meeting to express their feelings about something, let alone something of no direct relevance to abortion, help the cause of assisting women in the U.S. who want abortions?

Answer: It doesn’t. But it does help the female staff, because they experience negative feelings very strongly and thus desire some kind of group therapy.

Also, as evolutionary psychologist Joyce Benenson has argued, being evolved for most of human history to polygamous bands, females are adapted to desire a small number of close, one-to-one friendships with females who will help alloparent their offspring when the female is displaced in the sexual hierarchy of the harem and thus gifted fewer resources by the Alpha Male. These female friends bond by sharing their feelings of vulnerability with each other; hence they are evolved—highly impractically when they are running organizations—to want to talk about their feelings [The development of human female competition: allies and adversaries, by Joyce Benenson, Philosophical Transactions of the Royal Society B, 2013].

In a sense, then, the very existence of this meeting was bad enough from a strategic perspective. But it gets worse. 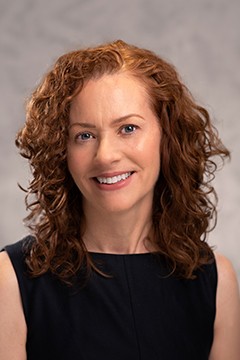 The Guttmacher Institute chair, Heather Boonstra (pictured right, Tweet her), vice president for  public policy, wanted to talk about what the charity could do to tackle “systemic racism.”

What was the response of her mainly white, female employees?

Staff suggestions, though, turned inward… “including loosening deadlines and implementing more proactive and explicit policies for leave without penalty.” Staffers suggested additional racial equity trainings, noting that a previous facilitator had said that the last round had not included sufficient time “to cover everything.”

Of course that was their response. Females are not evolved, as males are, to work in complex, hierarchical organizations. They are evolved to live in harems, in which there is relative equality. Indeed, British psychologist Simon Baron-Cohen has shown that, from a very young age, males are concerned with systems, goals and hierarchy, while females are focused on empathy and everyone feeling “included” [The extreme male brain theory of autism, by Simon Baron-Cohen, Trends in Cognitive Sciences, 2002].

If you add to this the fact that females are much higher in anxiety than males, then given such a situation they will, of course, push for “loosening deadlines,” being able to take paid “leave” simply because they feel vaguely unhappy, and having more “equity training.”

This, after all, is basically just a means by which they can express their feelings to each other and also alleviate a sense of guilt and social anxiety about their own “racism.”

The “training” aspect is also interesting. Females are higher in Conscientiousness (“rule-following”) than males, so they tend to value formal training and qualifications far more, as research has demonstrated [Why Women Don’t Apply for Jobs Unless They’re 100% Qualified, by Tara Sophia Mohr, Harvard Business Review, August 25, 2014].

Now, what was their Guttmacher boss’s response to all this, being the boss and thus a relatively psychologically masculinized female? [See Male and Female Bosses Share the Same “Classically Masculine” Personality Traits, by Christine Jarrett, Research Digest, March 2, 2018] Intercept reports:

"I’m here to talk about George Floyd and the other African American men who have been beaten up by society,” she told her staff, not “workplace problems.” Boonstra told them she was “disappointed,” that they were being “self-centered.” The staff was appalled…by the exchange...

These women argued that “certain staff members had been tokenized, promoted, and then demoted on the basis of race.” There was an investigation and it found that the complaints were entirely unfounded. They just hated the supervisor.

So why did they make anonymous complaints? Women are physically weaker and fear open conflict or openly playing for status. Thus, they will generally use covert means to bring down a rival for status: whispering, bitching, spreading rumors about her being a slut or a show-off or making anonymous complaints.

And why did they hate her? Because they are evolved to an expectation of “equality.” But Boonstra was in charge.

No longer remotely their equal, she was not really a potential alloparent. Thus, she was literally a rival for the resources of their children—real or implicit—and needed to be brought down.

She had also confronted them with their own selfishness, behavior which is “mean”—even if she was correct—due to the strong negative feelings it induced in them. Remember, “empathy” is more important than “systematizing” (and thus “truth”) for women, according to Baron-Cohen.

Intercept noted that many organizations, dominated by women it seems, have reported exactly the same problems, and it happens even if the boss is a black woman:

“The most zealous ones at my organization when it comes to race are white,” said one Black executive director at a different organization, asking for anonymity so as not to provoke a response from that staff.

White women, being higher in social anxiety than men or black women (see Race, Evolution, and Behavior, by J. Philippe Rushton) will be higher in extrinsic religiousness: competitive outward religious conformity—in this case to the Cult of Woke [Primary personality trait correlates of religious practice and orientation, by P. Hills et al., Personality and Individual Differences, 2004].

So, there may be some kind of silver lining to increasing female dominance of Woke organizations.

It means bickering, illogical decisions, time-wasting, and their being ground to a standstill.

And then of course there’s flat-out Black Lives Matter theft.

"The Occam’s Razor explanation is that the founders of Black Lives Matter, like the crusade they happened to launch with their hashtag, are stupid and lazy." - @Steve_Sailer https://t.co/vc2PxKAChc

It's Official: Leftists Are Crazy
<< Previous
Next >>
LATEST