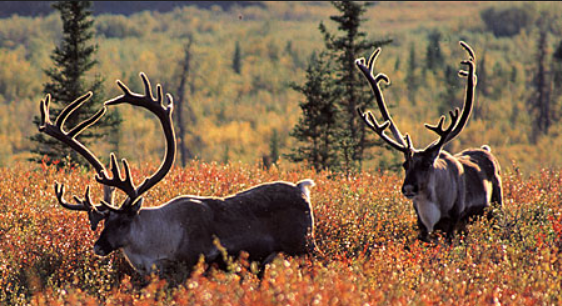 Goldberg Among The Caribou

"And, no matter how you slice it, America's claim to Texas and the Southwest is certainly far less morally compelling than Israel's is to its land."

At a conservative-libertarian meeting in Dallas some years ago, during the Q & A session following a talk I'd given on the need for immigration restriction to this country for environmental (and other) reasons, a gentleman at the back of the room stood up to express his view of the environment in general. He was against it, he affirmed. All of it. The environment, it seemed, was a conspiracy against humanity. But he wasn't buying. The best use for the Grand Canyon, suggested my questioner (or was he the answerer?), was to fill it in with L.A.'s garbage and build a sixteen-lane highway across it. That would serve the snakes and the burros and the catamounts and the backpackers and the treehuggers and the rafters and the Colorado River right!

I was reminded of the episode by Jonah Goldberg's National Review cover story, "Ugh, Wilderness! The horror of 'ANWR,' the American elite's favorite hellhole" (August 6, 2001. VDARE note: We can't link because NR doesn't post its cover stories, but for the Goldbergist line on the environment, click here, here, or here.)

This bit of investigative journalism in situ resulted, apparently, from an NR cruise in the Beaufort Sea—and by the author's reminder that for Francisco Vásquez de Coronado, the vast canyon he stumbled upon in 1540 was not a wonder of the world but only "a huge hole in the ground, and an even bigger hassle."

In 1979-80, I spent a year working in the oilpatch of western Wyoming to write my book Roughnecking It. It was the best year of my life - such a relief to work out of doors and drink Jack Daniels coming off work at seven a.m., rather than beat my head against my old manual office Royal day in and day out - spent among interesting colleagues and in picturesque locales. (Goldberg wrongly concedes that "Opponents of drilling are absolutely right: Oil exploration isn't pretty.") I am not against energy extraction per se. Even in the particular instance of the Alaska National Wildlife Refuge I'm content to reserve judgment, for now. If immigration really does balloon the population of this country to four hundred or four-hundred-fifty-million people by 2050, we're going to need plenty of oil.

But as an outdoorsman and ragged irregular bearing his own fieldpiece in the environmental wars, I recognize the language of economic libertarians (except the von Mises Institute), ideological capitalists, and immigration enthusiasts - one and the same people, usually - as applied to issues regarding natural preservation and conservation, development, and population problems.

It's the language of the in-your-face economite, on the one hand, and, on the other, of the urbane economite whose good manners and reasonable demeanor serve to distance him not only from the modern monsters typified by my interlocutor in Dallas but also from the woad-painted, longhaired savages of Earth First! - as well as, somewhere in between, corporate environmentalists like Carl Pope of the Sierra Club and Jimmy Carter of Habitat for Humanity.

It's only human to be goaded to error by extremist – or even simply wrongheaded and infuriating - positions taken by one's debating opponents. Urbane economites, minding perhaps President Eisenhower's maxim about never losing your temper except on purpose, poke fun at the crazies (e.g., the sort of people who can write of the "glorious" and "majestic" caribou returning each year to their "glorious" and "majestic" calving grounds in the ANWR), to discredit and ridicule non-economite values that are not only rational in themselves but human in a way economites can only pretend to understand. And do.

So, Goldberg never suggests–even facetiously–that the Alaska National Wildlife Refuge should be converted into an 853,776,000,000-square-foot Wal-Mart GalactiCenter. (Though he does hazard a guess that the majority of American supporters of drilling for oil in ANWR would, on seeing it first hand, agree with him that, "if America had to be struck by an asteroid, this would be the ideal impact point.") Instead, he demurs:

The most striking thing about this part of the world is how much meaning we impose on it….In this sense the whole area is really just a Rorschach test for the imagination. There's little doubt that for much of human history most reasonable people would have considered this spot the definition of the word 'godforsaken.'

The same could be said – in fact, it's said all the time - of the high sagebrush plains of Wyoming, whose spare beauty I find enticingly lovely, or of the lodgepole flats of Yellowstone Park that to me are tedious, but which delight most visitors and which not even Jonah Goldberg recommends turning into a western version of the Jersey Meadows.

Getting back to Coronado and the Grand Canyon, Goldberg writes, in faux self-apology,

So if it took hundreds of years for Americans to recognize that a giant gash in the ground was actually a marvel, perhaps I can be forgiven for failing to see the beauty in the coastal plain—if that beauty is actually there [my emphasis].

Why do I get the impression Goldberg simply has neither eye to see nor heart to feel the stark beauty of Jack London's Alaska, Brontë's northern England, or Laura Ingalls Wilder's Dakota territory, while the Grand Canyon isn't exactly his thing, either? (Too few people; no green grass; not enough like Central Park.) Like Coronado, he'd probably prefer the Big Rock Candy Mountain - a mountain of gold! - to a ditch with a trickle of muddy water at the bottom of it.

Finally, it isn't necessary to be a Deep Ecologist, or even an "inhumanist" like Robinson Jeffers, to appreciate that strain in the sensibility of Western culture which urges us to value nature for itself, to adopt a broader perspective on it than the narrowly homocentric one allows for. Goldberg says,

The appeal of ANWR to the average environmentalist is an entirely psychological one. …The fact is, environmentalists simply savor the idea that there is something untouched by grubby humanity out there.

Indeed they (we) do. And one of them–the late Edward Abbey, dean of American "environmentalist" writers in this century, now largely ignored by his politically correct successors–was explicit about this, writing as much as a quarter-century ago that, though for him damp and buggy Alaska lacked the arid allure of his chosen home, the desert Southwest, nevertheless the fact that space and liberty existed to such vast extent gave him welcome psychological and emotional assurance. (Not to mention somewhere to get conveniently lost in, if need arose.)

As for "grubby humanity:" Who does not feel–at times, anyway–the urge to escape the overweening, overreaching, overbreeding, overwhelming global project imposed on the world by the post-modern, post-industrial age?

The answer is, immigration enthusiasts working night and day to import the teeming anthills of Calcutta, Hong Kong, Mexico City, Brasilia, Peking, Seoul, and Bangladesh to American soil; and their allies, the economic libertarians and ideological capitalists. That's who. (You want people with a homocentric view amounting to a positively hostile attitude toward nature; you can find all of them you want south of the border, among the noble Mexican proletariat.)

Oh, and here's an idea! After all the oil has been discovered and pumped from under ANWR, we can use the place as a resettlement colony for people from northern Laos, or somewhere.

They'd only be taking housing sites Americans won't live on. You know?