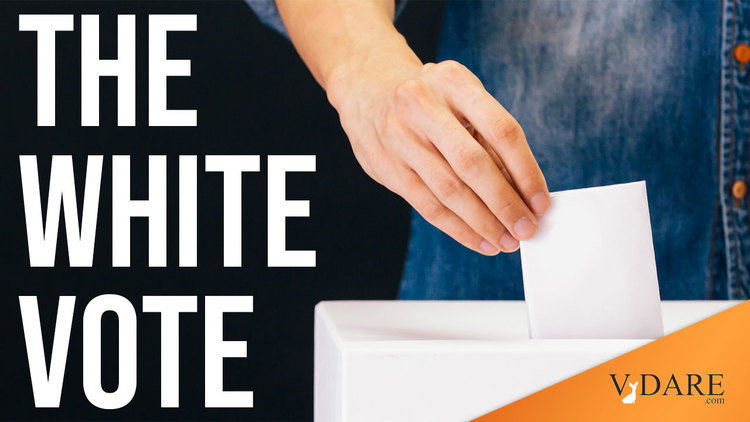 The numbers speak. Their message may be unfashionable, but hardly unpalatable. They say:

Here at VDARE, we've discussed repeatedly how dire will be the long-term impact of immigration on the Republican Party. It's crucial to understand, however, that the long-term has not quite arrived. The GOP is not yet held hostage. It still has a window of opportunity - definitely stretching through the next recession but maybe not to the recession after that - to save itself by changing the immigration laws. This can be seen by examining the 2000 election results closely.

The reason George W. Bush struggled so much to eke out a 271-267 win in the Electoral College (assuming that he can hold on to it) is not that he got crushed in the minority vote 77% to 21%. No, it's that he commanded only a measly 54% of the white vote.

To test this theory, I created a huge state-by-state spreadsheet of election results and Voter News Service exit poll numbers), which allows me to play what-if games, such as:

Why? Because whites remain by far the dominant bloc in the U.S. They count for 81% of all votes cast. Despite all of Bush's support for diversity, illegal immigrants, bilingualism, "affirmative access," and the like, an overwhelming 92% of his votes came from whites.

Incredibly, he still would have won. Bush would have tied 269-269 in the Electoral College and been elected President by the House of Representatives.

This remarkable finding stems from the sizable advantage the Republicans enjoy in the Electoral College. In this case, Al Gore would have won the popular vote by more than 3 million, but still lost the election because Bush's strength is in small states. Since every state, no matter how small the population, gets three Electoral Votes for having two Senators and a Representative, the Republican dominance of the Great Plains and Great Basin provides a striking advantage.

By the way, this is the flip side of the Republican catastrophe in California. When cultural conservatives flee California for the interior West, the GOP picks up cheap Electoral Votes and Senate seats in small states.

He would have picked up five more Electoral Votes. Big deal.

So where could Bush have picked up an additional 3 percent of the white vote? The most obvious source: white union families. The 26% of the electorate with a union member in their households voted 59% to 37% for Gore. For the time being, most union families are still white. So if Bush could have won enough white labor families to raise his total labor vote from 37% to about 46%, that would have done the trick of lifting his share of the white vote from 54% to 57%.

What could persuade more white union families to vote Republican when the current AFL-CIO leadership is so leftist? Here's a suggestion.

The labor bosses are selling out their old time members' interests in order to try to pad their membership with immigrants, legal and illegal. That's why the AFL-CIO supremos recently called for another amnesty for illegal immigrants.  Immigration should be the perfect issue for the GOP to use to split the rank and file from their Democratic bosses.

Since union efforts cost Bush Michigan, Pennsylvania, and Wisconsin (at a minimum), you'd think that the GOP would be hot to win back the Reagan Democrats.

Don't count on it, though. It's just so much more fashionable to continue to chase futilely after Hispanics.

In summary: the GOP could win more elections by raising its fraction of the white vote minimally than by somehow grabbing vastly higher fractions of the minority vote.

Note: This model is based on election results as of 11/15/2000 and the VNS exit polls, as reported on the CNN website. I also made minor objective statistical adjustments to account for the slight disagreements between the actual results and the exit polls. So, while your mileage may vary, this model looks quite robust.