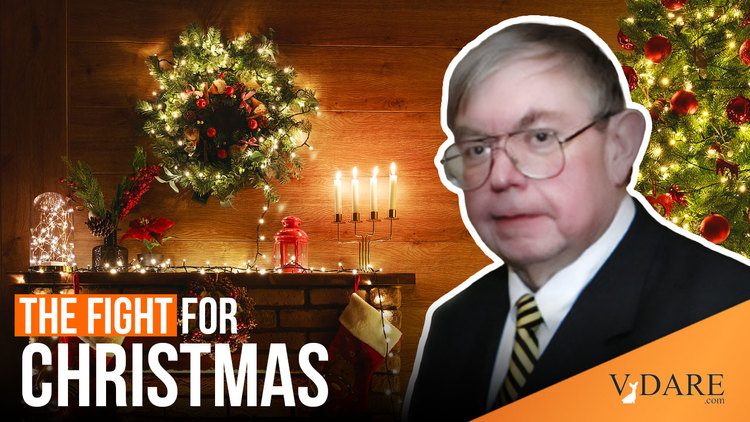 Before you O.D. on Christmas cheer this season, you might want to check out an article by writer Tom Piatak in the December issue of Chronicles, the magazine of the Rockford Institute in Rockford, Ill., as well as a few other sources of useful information. According to Mr. Piatak, the nation is at war—not just with terrorists in Tora Bora but with Christmas itself. And his argument is compelling.

You may have noticed the same trends Mr. Piatak has. In shopping malls, public streets and even private stores, Christmas and any mention thereof is vanishing. There are still bells ringing, Santa Clauses chuckling, and store clerks pushing the usual junk on none-too-reluctant customers. But what's going on is not called Christmas anymore.

"In order to avoid giving offense to anyone anywhere," Mr. Piatak writes, "millions of Americans are now seemingly content to keep quiet about the holiday they do celebrate and to act as if all sorts of other minor festivals—Kwanzaa, Hanukkah, Bodhi Day, Diwali, Ramadan, the winter solstice—are equally important." Mr. Piatak's charge is not the stale "Keep Christ in Christmas" sermon we hear from pulpits every year. What is going on is not so much the disappearance of the religious faith that created Christmas as the shrinkage of the civilization that sustained the holiday.

Mr. Piatak offers example after example of school children being either discouraged from engaging in observances of Christmas by their teachers or outright forbidden to do so. "My sister's children until very recently attended a public elementary school in an affluent Detroit suburb.... teachers are forbidden to mention Christmas. Instead, they teach about Hanukkah and Kwanzaa. So thorough was the indoctrination that my nephew asked two years ago why we did not celebrate Hanukkah or Kwanzaa."

Mr. Piatak isn't the only one to document the war against Christmas. The Washington Times recently carried a story that offered more details. A teacher in Plymouth, Ill. was warned not to read her class a book about Christmas, even though the book was in the school's library. The school board in Covington, Ga., dropped reference to "Christmas" from the school calendar after the ACLU complained about it. Two students in Rochester, Minn. were disciplined for wearing red and green scarves in a Christmas skit and saying "We hope you all have a merry Christmas." The details could go on.

What is happening is not that Americans are ceasing to care about or observe Christmas. What is happening has no popular foundation at all; it's rather a concerted campaign by the nation's elites to obliterate observance of Christmas per se. There's no objection to observing a major holiday at this time of the year, and there's really no objection to other holidays from other cultures that fall around this time of year. The objection is to Christmas itself.

What is happening is the same culture war that attacked the Confederate flag and other symbols of traditional identities, and it bears out those who warned that the attack on the Confederate flag was only the beginning. As the enemies of one civilization gain power—in school boards, city councils, law courts—they make war against it and seek to replace it with—what?

Their own civilization? Well, sometimes. Some non-Western peoples in the West want their cultural symbols to replace ours. But in most cases of the war against Christmas, those waging the war don't have any civilization at all. What they have is the globalist-humanist peanut butter of the New World Order, where no one has any nation, religion, race, or heritage and we all vegetate together as "Humankind."

Mr. Piatak to his immense credit sees through this fraudulence easily enough. "Giotto never painted a Kwanza scene. Bach did not write a Hanukkah Oratorio, and Dickens did not pen A Ramadan Carol." Real civilization isn't about and doesn't revolve around the oleomargarine versions of Christmas, and the fake "civilization" that the multiculturalists and multiracialists babble about and try to force everyone else to observe never created anything. No one ever fought for it or died for it or even planned their schedule around it, so almost by definition it can't possibly produce anything like a real holiday. Nobody, except the thin-blooded munchkins who concocted it, cares a hoot about it.

"Ultimately," writes Mr. Piatak, "we should be free to celebrate Christmas publicly and joyously, because it is a great holiday, and because it is our holiday—one of the  crowning glories of the Western culture that gave birth to America and sustains us still." If, of course, you are not part of the "we" to which "our" refers, then maybe you shouldn't celebrate Christmas. But then maybe you shouldn't be in America—or anywhere else west of Tora Bora.