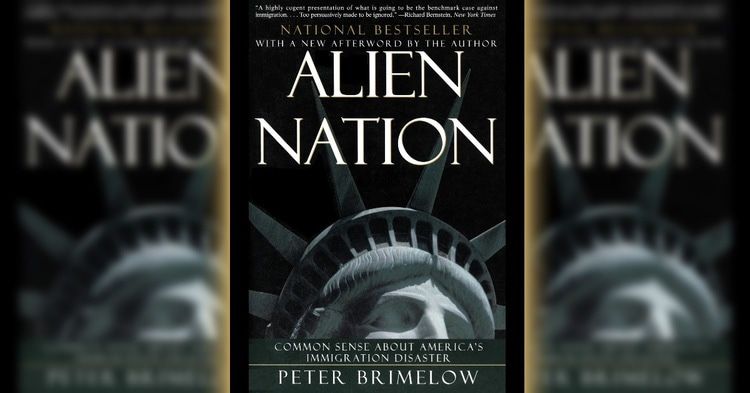 Immigration Is Not About Race

With Americans increasingly concerned about their own economic future, it's no wonder so many are becoming less generous in their attitudes toward immigrants. A majority of Americans, according to most polls, want to see fewer immigrants admitted. And more than two-thirds believe the immigrants who come here are failing to assimilate into the American melting pot. A book by Forbes senior editor Peter Brimelow called Alien Nation confirms the worst fears about what immigrants are doing to America. According to Brimelow, the United States is in danger of becoming, literally, an alien nation, overrun by millions of brown-skinned immigrants from Latin America and Asia.

Brimelow, an immigrant from Great Britain himself, is exercised by what he sees as the racial transformation of the U.S. population. "Race and ethnicity are destiny in American politics," he warns ominously. Indeed, most immigrants today, about 80 percent of the 804,000 immigrants who came in 1984, are from either Asia or Latin America. But Brimelow's presumption that these immigrants will somehow change America (a view shared by most immigration restrictionists) is wrong. First, Asian immigrants are, on average, among the most successful, best educated persons in America, and are moving up socially and educationally at a much faster rate than most European immigrants did in previous eras. According to the 1990 census, per capita income among foreign born Asians in the U.S. was about $16,000 a year, roughly the same as among non-Hispanic whites. And household income among Asian immigrants is actually higher than among whites: $35,521 compared with $31,672. The reason Asians do well is education: Nearly 38 percent of Asian immigrants over age 25 hold college degrees, compared to 20 percent of the total U.S. population.

Latin American immigrants, two-thirds of whom have not completed high school, fare less well economically. Their household income, measured in 1990, is only about $24,000 a year, but still well above poverty. More importantly, 83 percent of Latin American immigrant males are in the labor force, a rate higher than for almost any group and 8 percent higher than for non-Hispanic white males. In many respects, these Latin American immigrants are like their Italian, Polish, and Greek predecessors who came in the early 1900s with only a strong back and a willingness to work incredibly hard. Even among Jewish immigrants, generally regarded as among the biggest success stories of their era, the prospects looked pretty grim at the time. Author Thomas Sowell reports, "a 1910 survey of a dozen cities found two-thirds of the children of Polish Jews to be below grade level for their age." But these groups nonetheless thrived in America.

Brimelow's argument, however, is less about the economic impact of the new immigrants than the racial impact. "Americans have a legitimate interest in their country's racial balance...(and) a right to insist that their government stop shifting it." This type of racial argument was used before, beginning in 1882 with the first Asian exclusion laws and most recently in 1924 to keep out "undesirable" southern and eastern Europeans. In the 1920s, immigration restrictionists warned of the "mongrelization" of America in books like Madison Grant's The Passing of the Great Race. Nativists were then worried about Italians, Poles, Hungarians, Czechs and others. Sen. J. Thomas Heflin of Alabama claimed in 1920 these immigrants were an "alien power" who posed "the greatest evil that has confronted us in a century."

These words sound truly bizarre today when viewing the descendants of 18 million immigrants who came from 1900-1924. But current talk of a new "alien nation" is no less fantastic. Assimilation, not race, is the issue and deserves more attention and reinforcement than it currently receives in the public policy debate.