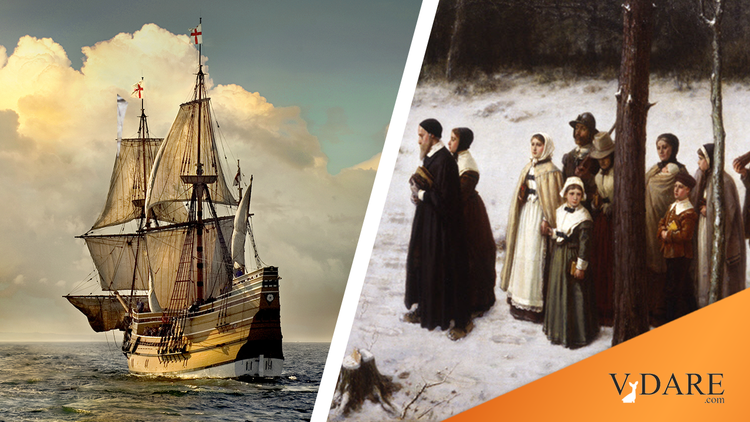 It's a familiar story that FDR "fashionably insulted" the Daughters of the American Revolution, by addressing them in a speech as "fellow immigrants."

Like a lot of familiar stories, it's not true.

In They Never Said It, Paul Boller reports that a reporter improved the story slightly, but that FDR did make the point, which we are all very tired of, that Americans are all descended from immigrants.

After remarking that through no fault of his own, he was descended from a number of people who came over on the Mayflower, he said "Remember, remember always that all of us, and you and I especially, are descended from immigrants and revolutionists."

This is true, of course, even of the Indians. Maybe at some point in history North America was occupied by peaceful, lovable, hunter-gatherers, living in harmony with nature. We never met these people, though. Long before the arrival of Columbus, they had been killed, (and in some cases eaten), by invading Indians.

But Roosevelt was unjustified in using this story to mock a group of patriotic ladies who were quite right to worry about immigrants and revolutionists.

For example, you may wonder why Roosevelt, who is thought of as being from an old Dutch patroon family, should have so many ancestors on the Mayflower.

In Country Squire In The White House, John T. Flynn , after explaining the family history from the 17th century on says: "...Franklin D. has in his veins a mere three per cent of Dutch blood and almost ninety per cent of English blood. The Dutch name persists, of course, but the blood is British. There is nothing unusual about this. The early settlers were Dutch but very few in numbers. They were quickly followed by large numbers of English settlers who formed the bulk of the immigrants in the first years of the colonies and of the states." (Emphasis added.)

So that explains that!

Of course, the Van Cortlandts, Stuyvesants, Van Rensselaers, and Roosevelts had little choice about this kind of immigration. You see, in 1664 the English had defeated them in a war.

So far that hasn't happened to the United States.