Immigration Myths (contd.): The Statue of Immigration, or Liberty Inviting the World

Everything has its opposite and just as for the Battle Hymn of the Republic there's The Bonny Blue Flag, or for Lillibulero there's The Wearing of the Green, the sonnet on a small plaque inside the pedestal of the Statue of Liberty (not, as many think, emblazoned on the base) has an opposite, too.

It's called The Unguarded Gates, by Thomas Bailey Aldrich. Of course, it's possible that Aldrich wasn't even intending to answer The New Colossus, which wasn't really that popular at the time, but simply expressing his concern about the unrestricted immigration of the late nineteenth century.

(This is called blank verse. A worldwide shortage of rhyming words hit the English language near the end of the nineteenth century, and poetry hasn't been the same since.)

…Wide open and unguarded stand our gates,
And through them presses a wild motley throng
Men from the Volga and the Tartar steppes,
Featureless figures of the Hoang-Ho, Malayan, Scythian, Teuton, Kelt, and Slav,
Flying the Old World's poverty and scorn;
These bringing with them unknown gods and rites,
Those, tiger passions, here to stretch their claws.
In street and alley what strange tongues are loud,
Accents of menace alien to our air,
Voices that once the Tower of Babel knew!
O Liberty, white Goddess! is it well
To leave the gates unguarded?…
(For the entire poem, click here).

“Wait!” I can hear you say. “I didn't learn that in school. It was something about 'Mother of Exiles'.”

Well, she wasn't planned as a Mother of Exiles, but as a “light unto the nations.”

“Liberty Enlightening the World,” the French called her, not Liberty Inviting the world. The French were expressing their thanks that the good example of the American Revolution had led to French Revolution.

The Americans of the 1880's were acknowledging their debt to Lafayette, de Grasse, and the French nation, which had sent guns, and money to Washington's forces.

In 1865, during the reign of Napoleon III, when Édouard Laboulaye was having dinner with Frederick Bartholdi, he said to him:

“Wouldn't it be wonderful if people in France gave the United States a great monument as a lasting memorial to independence and thereby showed that the French government was also dedicated to the idea of human liberty?”

By the time the Union France-Americaine got around to delivering the statue, Napoleon III was gone. And again, the statue served the purpose of French liberals, in emphasizing that France was now “a Republic, not an Empire”…as the saying goes.

Some Americans sardonically wondered why France, which had a shortage of Liberty, should be exporting it to the U.S., which had plenty.

“I will try to glorify the Republic and Liberty over there, in the hope that someday I will find it again here.”

The Statue of Liberty (and I yield to no one in my devotion to Liberty itself, or in my admiration for the actual Statue) was not a project of the American government. It was a free-enterprise project, a gift from the people of France (again not the government, but private enthusiasts), to symbolize the participation of France in the American War of Independence, and the perpetual friendship of the two nations.

France raised the money for, and constructed the Statue itself, but the pedestal was to be built with funds provided by the Americans. 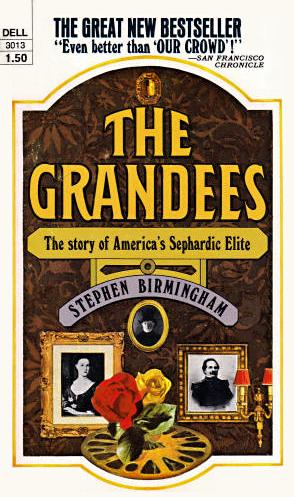 Newspaper magnate Joseph Pulitzer (b. Hungary, 1847), raised most of the funds for the pedestal. He felt that New York's millionaires should be coughing up more money for the statue. They didn't have to, though. They had actual liberty; there were no income taxes to require tax-deductible contributions.

Emma Lazarus was a fourth-generation American, a member of New York's Sephardic Jewish community (described in Stephen Birmingham's The Grandees), a philanthropist interested in aid to Russian Jewish refugees persecuted by the Czar. (Russia was an evil empire even while they still had Emperors.) She supported the immigration of Russian Jews to America, then as now, the least anti-Semitic country on Earth.

She wrote “The New Colossus” for the Bartholdi Pedestal Fund in 1883, before the statue was erected (“Here at our sea-washed sunset gates shall stand, etc”), but it was not inscribed on a plaque inside the statue's pedestal until 1903.

This whole thing is very strange. Imagine a hypothetical foreign country with immigration problems explaining its policy this way: “We used to have sensible immigration laws, but someone built this damn statue.” You'd think they were mad.

It turns out that the tablet was the gift of Georgina Schuyler, a New York philanthropist who was a friend of Emma Lazarus', but who didn't even know about the sonnet until she found it in a bookshop years after Emma Lazarus' death.

Georgina Schuyler was descended from the Dutch founders of New York, and was a direct descendant of Alexander Hamilton. She didn't consecrate this tablet to the concept of unrestricted immigration but rather “in loving memory of Emma Lazarus.”

The Statue of Liberty didn't become an official national monument until 1924. Bedloe's Island (renamed Liberty Island in 1956), is Federal territory, “the former site of a quarantine station and harbor fortifications.”

(Immigration skeptics note: Both quarantine stations and harbor fortifications are designed to protect America from the world, rather than promiscuously admit it.)

Fans of the United Nations will be delighted to learn that the statue has been designated a World Heritage Site. (Click here for a list of the other US sites that a bunch of interfering foreigners have presumed to designate as part of the “patrimonio mundial.”)

But where did the sentimental poppycock tying the Statue of Liberty with unrestricted immigration come from? Young children who couldn't tell you what happened in 1776 or when the War of 1812 happened, hear The New Colossus read so often in civics class that there's some danger of them memorizing it, in violation of every tenet of progressive educational theory.

It certainly never occurs to any of them to ask themselves: “This is the statue of Liberty. Does unrestricted immigration into a democratic country increase human liberty, or does it decrease it? Suppose the new people don't like liberty?”

This connection was pushed by people like Louis Adamic, an immigration enthusiast who flourished in the Thirties and Forties.

Adamic, who was born in Blato, Slovenia in 1899, passed through Ellis Island in 1913. He was an itinerant laborer for years, and his travels through America gave him a mixed impression of his adopted country, some good and some bad.

He was an early multiculturalist. The Statue of Liberty Encyclopedia says

He frequently expressed a hope that America would learn to tolerate and even value the infinite variety of its people. In 1934, he boldly launched a publicity campaign to elevate the social position of immigrants and ethnic minorities. Realizing that legitimizing symbol might strengthen his cause, he enlisted the potent imagery of the Statue of Liberty and inspiring words of Emma Lazarus's eloquent sonnet, The New Colossus. Throughout the 1930's and early 1940's Adamic and others recited it in radio broadcasts, making its words known to millions of listeners.

The poem also appeared in World War II movies; Charles Boyer recited it as a French refugee in Hold Back the Dawn. (1941)

In 1954, Adamic was found dead of a gunshot wound to the head; buildings on his property were on fire. Though local police ruled his death a suicide, his wife suspected murder by his political enemies: “Tension in the Yugoslav immigrant exile community was high due to powerful factions.” (Titoist versus Monarchist.)

That, of course, was what Thomas Bailey Aldrich warned of in The Unguarded Gates: “[T]iger passions, here to stretch their claws.”

If he was shot by a post-war Yugoslav immigrant, Adamic may have suffered brief a change of heart on the immigration question.

The association of Lady Liberty with the ideal of unrestricted immigration is thus fairly recent, although most people don't know this.

In 1970, Thomas Szasz, criticizing attempts to examine the mental hygiene of immigrants says “This, I should like to remind the reader, was in 1912, when the inscription on the statue of Liberty was not yet rendered into a historical relic by the immigration laws enacted after the First World War.”

He may be right about the mental hygiene movement (you can't really test people for sanity unless you speak their language). But in 1912, the inscription had only been there for nine years. The bronze on the plaque was probably still shiny.

The “ideal” of immigration doesn't, therefore, go back to Plymouth Rock, or 1776.

Not even 1886, when the statue was erected. You could ask Frederick Bartholdi.

One website says “In 1870, with the beginning of the Franco-Prussian War, Bartholdi temporarily changed careers; he became a major in the French army and was stationed in his home city of Colmar. When the Germans annexed the entire Alsace region [including Colmar], making its residents German citizens, the reality of the word “liberty” took on a new, personal meaning for Bartholdi.”

And so, I imagine, did the word “immigration.”