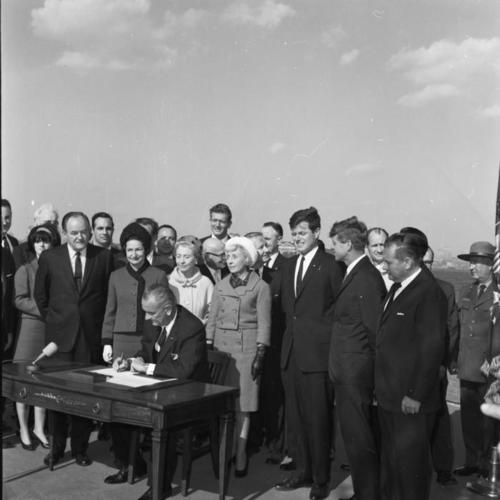 John Derbyshire: A Dismal Anniversary—50 Years Of The Immigration Act Of 1965

The 1965 Act did two big things, and a multitude of small ones. 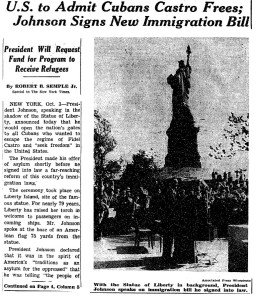 The first big thing it did: abolish the old National-Origins quotas, established in 1921, revised in 1924 and 1929. The idea of the quotas was to maintain demographic stability by limiting settlement from any European country to some fixed percent of that country's representation in a recent census.

The 1921 Act used the 1910 census as its benchmark. The 1924 Act used the 1890 census in order to reduce the quota numbers on South and East Europeans, who it was thought did not make as good citizens as north and west Europeans. The 1929 revision went to the 1920 census.

To present-day sensibilities it all sounds very horrible: "Whaddya mean, an Italian or a Pole doesn't make as good a citizen as a German or Irishman? Whoa!"

But that was then and this is now. And personally, I decline to join in the screaming and fainting. I take the old-fashioned view that a nation has the right to admit for settlement whomever it pleases, on any grounds at all, rational or otherwise. It's up to the people of that nation and their legislators to say who they want to settle. It's not up to foreigners.

If, when I applied for U.S. citizenship in 2001, the immigration authorities had said: "Sorry, pal, we don't like the look of your teeth, and we have enough Brits anyway," it would not have occurred to me that I had any grounds for complaint. I might have wheedled and pleaded a bit—"Come on, just one more won't hurt, and I'll find an orthodontist, I promise"— but if they'd sent me back to Blighty at last I would have understood. This country belongs to Americans. It's for them and their legislators to say who they want joining them.

Those 1920s quotas applied to Europeans, by the way. Americans at that time didn't want immigrants from Africa or Asia at all. A few hundred were admitted on exceptional bases, but they weren't allowed to naturalize.

The Western Hemisphere—Latin America—was also left out of the quotas. Within an absolute and quite low ceiling on total immigration, numbers were not restricted. But there were literacy tests and job requirements that kept them low in practice.

You have to remember that what we now call the Third World didn't seem very consequential back then. Africa, Asia, and Latin America were numerically inconsequential compared with the developed world, the white world.

Population of the British Isles, Britain and Ireland, in 1921: 47.3 million. Population of Mexico in 1921: 13.9 million. So there were only thirty percent as many Mexicans as Brits back then.

Population of the British Isles today: 68.6 million. Population of Mexico: 120.3 million. So today there are 75 percent more Mexicans than Brits. If you throw in the thirty or forty million people of Mexican origin in the U.S.A., it's over twice as many. There are people alive today who have seen the ratio of Mexicans to Brits go from thirty percent to two hundred percent.

And yes, back then the black, brown, and yellow nations weren't civilizationally consequential either. Today Pakistan has the atom bomb. In 1921 Pakistan didn't even exist!

That's the story of our age. Across a single lifetime the nonwhite peoples have gone from being backward and few to modern and many—way many. The civilizational gap has closed, technologically if not politically; the demographic gap hasn't merely closed, it's flipped. "Numbers are of the essence."

So why did the 1965 Act abolish the national-origins quota system?

Well, much of it had gone by the board anyway by 1965. The Chinese Exclusion Act, for example, had been repealed in 1943 out of deference to an ally in the war against Japan. The previous year, 1942, had seen the Bracero program to bring in contract labor from Mexico. The Displaced Persons Act of 1948 brought in half a million war refugees, mostly from Europe. The McCarran-Walter Act of 1952 ended most remaining racial restrictions. Other tinkerings and adjustments had been made.

So by 1965 the national-origins quota system had come considerably unraveled—though overall numbers were still kept low.

Then there was the Cold War and the Civil Rights movement.

The Cold War wasn't just a military competition, remember; it was a competition for prestige. There was a widespread feeling that the U.S.S.R., with its egalitarian ethos, had a moral edge over the U.S.A., with its segregated drinking fountains and such.

Here's an old Russian joke from Cold War days. Ivan, the generic Russian Everyman, is in conversation with a Communist Party official.

Ivan:  Is it true that an engineer in America makes four times the salary of an engineer here in the Soviet Union?

The second big thing the 1965 Act did: change the balance between skills-based immigration and family reunification—rather strongly towards the family-reunification side. Seventy-four percent of settlement visas were allocated to family reunification; a proportion that has kept pretty steady ever since.

The politics behind this was straightforward. The labor unions, which in those far-off days still saw it as their business to protect the American working man, didn't want floods of skilled labor coming in to depress wages. And ethnic lobbies—which in those same days meant mainly East Europeans—wanted to bring relatives here.

The opening-up of immigration from the Third World, where families are bigger, pushed skill-based immigration further…into the shadows, if you like. There is no shortage of applications for family-reunification visas. That's why we not only got the Texas clock boy Ahmed Mohamad and his Dad, Mohamed Mohamad, we got his invalid illiterate grandma, too.

The 1965 Act thus replaced the strictly-limited immigration regime of the previous forty years, whose main goal was demographic stability, with a mighty flood of immigrants, mostly from the Third World.

And a mighty flood it truly has been. I've just been reading this September 28th report out of the Pew Research Center. Opening sentence

Fifty years after passage of the landmark law that rewrote U.S. immigration policy, nearly 59 million immigrants have arrived in the United States, pushing the country's foreign-born share to a near record 14 percent. [Modern Immigration Wave Brings 59 Million to U.S., Driving Population Growth and Change Through 2065]

Not according to its sponsors. The Senate floor manager for the Act, when it was still a bill, was Teddy Kennedy. Quote from him at the time:

Under the proposed bill, the present level of immigration remains substantially the same …

That came with a raft of other promises: the promise, for example, to quote Senator Kennedy again, that

The ethnic mix of this country will not be upset …

Those assurances from Kennedy, and all the others, turned out to be false.

Ann Coulter, in a fine spirited column the other day, boiled it down to party politics. The Democrats, she wrote, knew they'd never get their progressive agenda through a supermajority-white electorate, so they decided to bring in a new electorate.

It's certainly turned out that way. But with all respect to Ann, whom I love like a sister, I don't buy her thesis of a deliberate plan to replace the electorate. Our politicians just don't think that far ahead. Never attribute to malice what can be adequately explained by stupidity.

In any country, at any time, totally outdated views of the rest of the world are the norm among people who don't think much. The English people I grew up among in the 1950s all though of France in terms of Gay Paree hedonism, the Folies Bergère and such, as if we were still in the Belle Époque of the 1890s. In fact 1950s France was prim and dull.

These congresscritters of 1965 didn't have their finger on the world's demographic pulse. They didn't spend their free time poring over population projections for Africa and Asia. Mentally, demography-wise, they were still in the 1920s, when the world's nonwhites didn't really count, weren't really important, and existed mainly so that they, the congresscritters, could make grand moral gestures.

Making grand moral gestures is a thing politicians really, really like doing. And they never liked it more than in the Johnson Administration, the high tide of American liberal triumphalism.

Theodore White said that the 1965 Act was "probably the most thoughtless of the many acts of the Great Society." Historian Roger Daniels said: "Had Congress fully understood its consequences, it almost certainly would not have passed."

A different historian, eighty years earlier, had famously said that the British Empire was acquired "in a fit of absence of mind." A lot of stuff happens like that.

This year marks another immigration anniversary: the 20th anniversary of the publication, in the Spring of 1995, of VDARE.com Editor Peter Brimelow's Alien Nation: Common Sense About America’s Immigration Disaster.

Peter discusses the 1965 Act at length in Chapter Four of his book. Here is a longish quote from the end:

In the end, Americans have to ask themselves very specific questions about the immigration flood unleashed upon their country by the politicians in 1965: Well?

I can’t help but wonder.