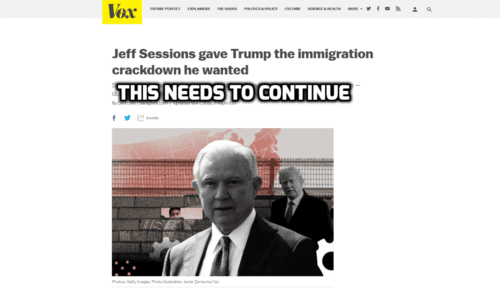 President Trump’s biggest challenge right now is deciding who will be his next Attorney General. Especially after the loss of the House, this decision is critical for immigration patriots.

By all accounts, the acting Attorney General, Matt Whitaker, is a solid replacement to Jeff Sessions. Whitaker took the job upon the recommendation of immigration patriot hero Rep. Steve King, and he is reportedly intent on reining in special counsel Robert Mueller. But he’s only temporary, and Democrats in Congress are determined to make sure this acting AG has the shortest tenure possible. [Top Democrats Vow to Block Matthew Whitaker From Interfering in Russia Inquiry, by Sheryl Gay Stolberg, New York Times, November 11, 2018]

Trump may just want Whitaker to throw a wrench in the Mueller investigation and leave. Trump aides hope he will limit the scope of Mueller’s final report and protect Trump from a subpoena. It would be easier for a man not dependent on Senate confirmation to accomplish this task more than anyone else. [Matthew Whitaker: An Attack Dog With Ambition Beyond Protecting Trump, by Adam Goldman, Michael D. Shear and Mitch Smith, New York Times, November 9, 2018]

The curtailment of the Mueller investigation would be welcome news to immigration patriots and conservatives generally. It would finally free up the President to focus on more important matters and clear up the impeachment cloud hanging over his head.

Of course, that issue is not everything for immigration patriots. With the House in the hands of the Democrats, the chances of Republicans passing serious immigration reform in the next two years is practically nil. Only the Executive Branch will be capable of putting patriotic immigration policy into practice.

The departed AG, Jeff Sessions, made immigration enforcement a priority at the Department of Justice and implemented policies that made the country safer. He worked hard to make immigration courts more efficient and tougher on illegal immigrants. Sessions’ DOJ revived and implemented Trump’s travel ban. He issued the directive that scrapped the Deferred Action for Childhood Arrivals program and ordered the withdrawal of federal funding from sanctuary cities. (Both measures are of course being harassed by Leftist judges, but the Administration may prevail at the Supreme Court.)

Sessions also worked to end the odious “Catch And Release” policy toward illegal immigrants by demanding that every migrant caught entering the country was slapped with a federal misdemeanor. [Jeff Sessions gave Trump the immigration crackdown he wanted, by Dara Lind, Vox, November 7, 2018]

It is essential that the next attorney general continue these policies and keep up the battle against Leftist judges who want to impose open borders on the country.

The obvious best choice: Kris Kobach. The Kansas Secretary of State unfortunately lost his bid to become the next governor of his home state, freeing him to serve the Trump Administration. Kobach’s record on immigration is impeccable and there’s arguably no one more committed to tough enforcement of the law. He could also continue his crusade against voter fraud with all the resources of the DOJ at his disposal.

The president likes Kobach, but Trump’s advisers reportedly are telling him they can’t get the immigration patriot through the Senate. [After Sessions, who will Trump dump next?, by Eliana Johnson and Annie Karni, POLITICO, November 7, 2018]

Unfortunately, that assessment has a basis in truth. Republicans are only going to maintain a slim majority in the next congressional term, and too many Republicans would likely oppose Kobach running the DOJ. “Moderates”  (who can be very dogmatic, we should adopt the British term “wets”) such as Susan Collins and Lisa Murkowski would raise a fuss over Kobach’s strong immigration patriot record, and he wouldn’t have the benefit of Sessions’ personal rapport with Republican senators.

Of course, there’s a chance Kobach could make it through if Trump and Senate Majority Leader Mitch McConnell pressed the screws on the GOP caucus. But it’s not guaranteed—and the president may prefer Kobach as the new DHS secretary anyway. The Washington Post reported late Monday that Trump is set to fire current DHS secretary Kirstjen Nielsen, giving Kobach the chance to take over [Trump is preparing to remove Kirstjen Nielsen as Homeland Security secretary, aides say, by Nick Miroff, Josh Dawsey and Philip Rucker, The Washington Post, November 12, 2018].

DHS Secretary Kobach would still be good news for immigration patriots, if not as good as Attorney General Kris Kobach. But he’s not the only good choice to replace Sessions. Texas Rep. John Ratcliffe, a rumored candidate on the president’s shortlist, also looks to be someone who will uphold Sessions’ immigration priorities. [Ratcliffe, Gowdy join list of potential attorney general picks, by Leigh Ann Caldwell and Julia Ainsley, NBC News, November 10, 2018] Ratcliffe, a former U.S. attorney, has an A+ score from NumbersUSA and has drafted legislation to crack down on illegal immigrant criminals. But, unlike Kobach, he doesn’t have the controversial reputation and he is also a member of Congress in good standing with the Republican leadership. These factors would help him obtain confirmation more easily than Kobach.

If Kobach is considered too difficult to confirm, Ratcliffe would be the best alternative. Sessions has laid the groundwork for making America a safer place. The next AG just needs to continue these efforts and not scrap them to appease the press.

But if neither Kobach nor Ratcliffe is selected, there is another candidate who would not be terrible. Rep. Trey Gowdy is also in the running for the job, and he has the advantage of numerous Fox News appearances over his competitors. Trump may see Gowdy as the attack dog he needs in the White House based on his Fox News reputation and his investigation into the Benghazi scandal. Gowdy does have an A score from NumbersUSA, but immigration has never been a priority for him. It’s doubtful he would scrap Sessions’ policies, yet his own priorities may set aside the real issues that face our nation.

Gowdy also may have a harder time getting through the Senate. Collins and Murkowski are not likely to be fans of his partisan style and his hounding of Hillary Clinton. His Benghazi record guarantees a major fight in the Senate, and Republican leaders may want to avoid that battle. Additionally, the outgoing congressman may not want the job at all, as he appears poised to take time off from politics.

Nevertheless, all three of these candidates would be better than Chris Christie, the current frontrunner in the press for the job. Christie has a terrible record on immigration and his main priority is “criminal justice reform” i.e. releasing black felons. He would likely eliminate Sessions’ reforms and would show no heart in fighting to uphold immigration law.

Fortunately, Washington Watcher doesn’t think Christie will get the nomination. There’s hardly any enthusiasm for the former New Jersey governor among Republicans and rumors of New Jersey-type corruption and coercion will not serve him well in a Senate fight.

It’s also hard to believe that Jared Kushner would ever tolerate his father’s jailer serving as the nation’s top law enforcement officer.

Trump must make the right pick for attorney general. Jeff Sessions served this nation well and had reversed many of the bad policies of the Obama era. Trump’s base must let the president know that a worthy successor must take over—beginning with either Kris Kobach or John Ratcliffe.